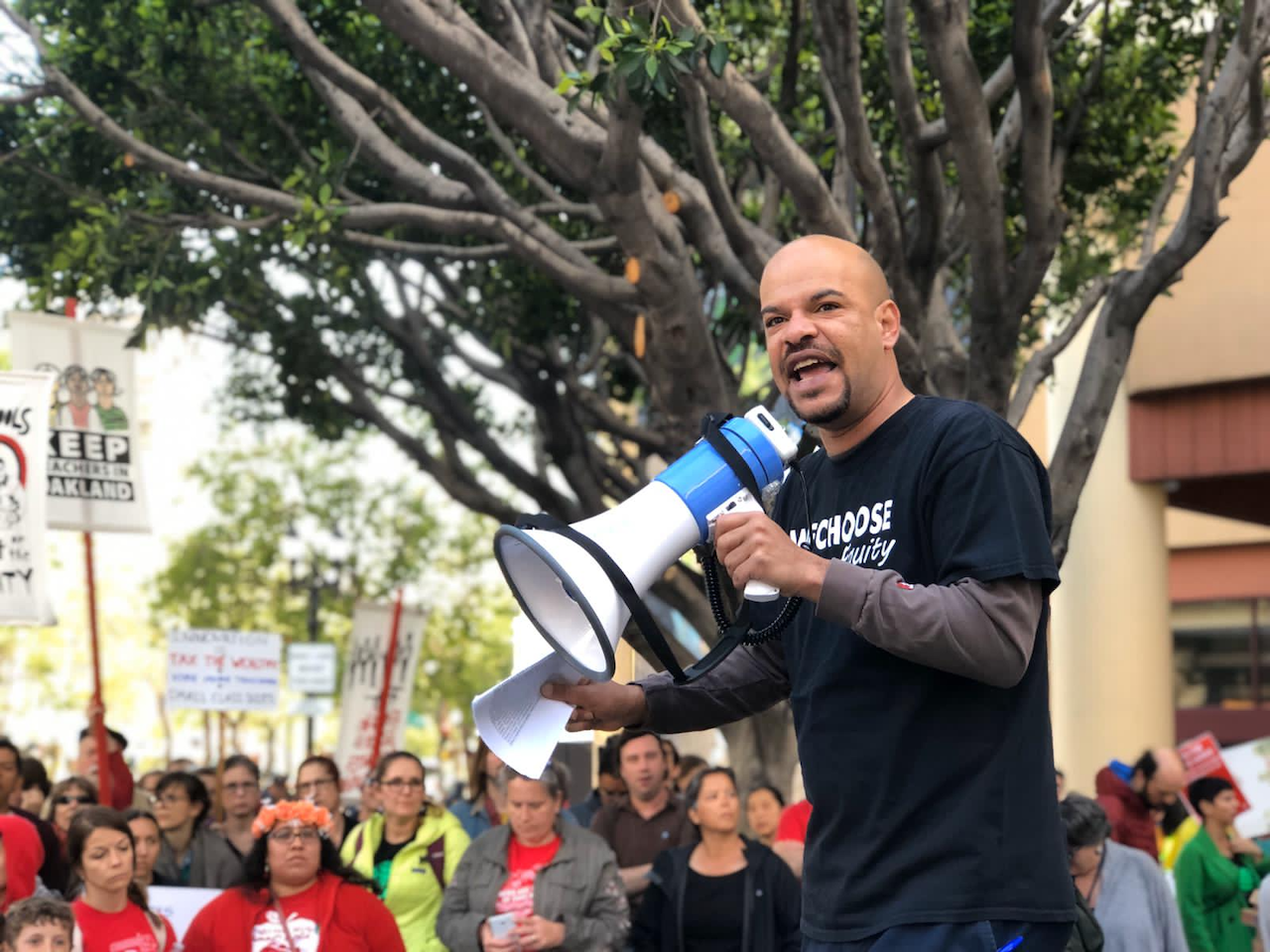 Mike Hutchinson, who is poised to win the District 5 School Board election, speaks at a protest against NewSchools Venture Fund outside of an invitation-only fundraising dinner for the organization at Oakland’s Marriott at City Center on May 8, 2019, a few months after the Oakland Educator Strike. NewSchools Venture Fund is a billionaire backed organization that has invested in Oakland Charter Schools. Photo courtesy of Rex LC and East Bay DSA

As final votes are being tallied, three Oakland School Board director candidates backed by the Oakland Education Association who ran on platforms against privatization, cuts, and public school closures hold significant leads poising them to win against candidates who, backed by political action committees, spent between two to three times more money on their campaigns.

Dannhaus, Edgerly and Gaines received major campaign donations from PACs including Go Public Schools and Power2Families, which are funded in large part by billionaires like Michael Bloomberg, Bill and Melinda Gates, and Alice and Jim Walton, all of whom have encouraged the development of charter schools.
“I knew, even years ago, the only way to counter money power is with people power,” said Hutchinson.

Starting in 2012, Hutchinson began fighting school closures when he founded Oakland’s Public Education Network in reaction to school closures that included Santa Fe Elementary, a school he had attended.

In 2016, Hutchinson ran for School Board on an anti-school closure and anti-privatization platform but only secured about 16% of the vote. Hutchinson claimed years of hard work by himself and other public school advocates helped shift the narrative by 2020 against both the ideas that school privatization is beneficial and that public school closures are needed or inevitable. In 2020, the message of his campaign resonated more with voters.

From 2004 to 2019, Oakland had closed 18 public schools and in 14 of the closed sites, charter schools moved in.  The student population of the 16 closed schools was mostly Black. School board members claimed closures were financially necessary to best serve students, and pushed an agenda to close 24 more schools in 2019.

At the same time, Hutchinson, advocates, and OEA united to assert that the closures were strategic and came from underfunding and under-supporting schools that served Black and Brown students.

OEA Vice President Ismael Amendariz said the union had been focusing on problems around teacher retention issues like low teacher wages compared to nearby districts. But they shifted their focus in 2019 to cuts to OUSD and closures of schools by showing that School Board members who were pushing for the 24 closures had their campaigns funded by GO Public Schools.

Since pro-charter school funded Board members were pushing cuts, and school closures in recent history often meant charter schools taking over closed public school sites, they claimed the push to close schools was about privatization instead of financial necessity.

Amendariz said the union made an effort to make issues of billionaires pushing privatization more apparent to people during and leading up to a seven-day Oakland educator strike in late February and early March of last year. Hutchinson said the public was well situated to reject the privatization efforts as Pres. Donald Trump and his Secretary of Education, Betsy DeVos, who are unpopular in Oakland, pushed a similar agenda.

East Bay Democratic Socialists of America were strong supporters of the strike, claiming that the push to spread charter schools, which do not allow unions, was funded by billionaires who wanted to break up labor organizing that could raise wages while improving working conditions and benefits which would drive up taxes on billionaires.

“In the build-up to the strike we had memos, we had education about who was buying our School Board,” said Amendariz. “When we were doing actions during the strike we were very intentional about where we were doing the actions and what was the messaging. That’s when people started to realize there’s something wrong here.”

A teachers’ strike in January 2019 in Los Angeles had similar anti-charter messaging that helped make Oakland’s strike more legible to the public. Hutchinson saw parallels between the two strikes in terms of “who the unions made the target of their strikes.”

Mona Treviño, who has been a parent activist since 2015 and worked with Hutchinson on his campaign said that although public consciousness against schools closures and privitization has recently shifted, “there have been waves of resistance in the last 10 years.” She pointed out battles to stop the closures at Santa Fe, Tilden, Maxwell Park and an occupation of Lakeview Elementary School during Occupy Oakland.

With Hutchinson, she and other advocates have spoken regularly at School Board meetings against closures and cuts. Organizing around legislative issues like the fight for AB 1505, a bill passed in October 2019 that helps give local school boards the power to deny approving charter schools, also has helped to educate voters.

In the months leading up to the strike, non-OEA sanctioned actions by teachers and students helped get themselves, the public, and the union to discuss and consider the issue of budget cuts and closures by laying the groundwork for a strike where issues of billionaire-backed privatization were more clearly addressed.

The school board chose to approve the closure of Roots Middle School  January 2019, but not before Roots students, teachers, and parents showed up at School Board meetings to speak out against its closure.

Students were at the forefront of the actions, wielding signs against budget cuts and closures, speaking out, at times though sobs and tears, in public comments against the board choosing to close their school. At one point students convinced the board to engage in a restorative justice circle to discuss the closure, transforming the regular format of the board’s meetings.

“You closing down Roots, to me, is like putting me up for adoption,” said former Roots student Tenai Harris, addressing the School Board. “Roots made me who I am.”

After the School Board announcing its decision to close the school, parents and students decided to boycott attending the school on February 1. Treviño said around 80% of students did not attend school that day. The activism stemming from Roots helped put the issue of closures at the forefront of people’s dialogue during the strike.

In December, 2018, Oakland High School teachers called in sick en masse to protest the lack of a contract with the district, a lack of nurses, too-large class sizes, and low wages. The strike was not sanctioned by OEA and was, in part, a reaction to what teachers perceived as a lack of union action. Oakland High teacher Alex Webster Guiney said at the time that the union was “moving too slow.” On Jan. 18, 2019, teachers and students at four other OUSD High Schools, and a middle school joined Oakland High to stage a mass walkout and march to protest the same issues.

The teacher-led actions soon lead to a student lead sick out, organized by students at Oakland Technical High School, where students from six different Oakland High Schools called out sick on Feb. 8, 2019, and rallied in support of the same demands. Looking back on the sick-outs and walk-outs, OEA Vice President Becky Pringle said that they helped organize high schools for the upcoming seven-day union sanctioned strike.

“Before the strike I didn’t have any awareness of union politics or School Board politics,” said Webster Guiney. “I just knew we didn’t have a contract, we hadn’t had one for 20 months, and our union wasn’t doing anything as far as I could tell.”

At that time, new union leadership coming into OEA was planning for the sanctioned strike. During the strike, and just after, when parents, students and teachers at Kaiser Elementary School repeatedly protested the school’s closure at board meetings, OEA, Hutchinson, and other advocates found it easier then they had in the past to educate the public about the privatized interests involved in school board elections.

“We went on our own little learning journeys,” Webster Guiney said. “People really started to see…there’s a concerted effort to take over Oakland schools.”

During the strike, Hutchinson was regularly at marches, pickets, and protests speaking out against public school closures and charters moving into public school sites, drawing a firm line between him and board members. None of the incumbent School Board members eligible to run for re-election this year chose to.

Hutchinson drew parallels between his campaign and Carroll Fife’s, an organizer who has worked diligently for housing for all in Oakland who recently won District 3’s City Council race.

“Both Carroll and I are organizers who have been on the front lines for years around all of these issues,” he said. “I’m really proud that it shows that in Oakland we have a by-any-means-necessary, inside-outside approach to politics.”

With the message more legible to the public, OEA-backed campaigns found it easier to talk to voters and drum up volunteers. Hutchinson had around 100 volunteers who worked almost 10 Saturdays in a row— missing one day due to wildfire smoke—doing phone calls and walks through his precinct to engage with voters.

In District 3, OEA helped phone 12,000 voters to support Williams, who opposes public school closures, against Edgerly, whose campaign received more than $100,000 from Go Public Schools and over $50,000 from Power2Families.

While three union-backed candidates are poised to win their races, one candidate backed by OEA, Ben Tapscott of District 7, looks poised to lose as he has received about 4.5% fewer votes than Clifford Thompson, whose was funded by Go Public Schools and Power2Families. This means the Oakland School Board has a narrow majority of candidates whose campaigns were backed by billionaires.

Still, with strong public support against closures and the privatization of schools and a new round of School Board director elections coming in 2022, OEA and public school advocates are hopeful.