OKPOP, a project of the Oklahoma Historical Society, is planning a special event to mark Juneteenth on Monday, June 17, from 7 to 8 p.m. at the Rudisill Regional Library, located at 1520 N. Hartford Ave. in Tulsa.

The event will include an interview with award-winning journalist Carmen Fields by former Senator Judy Eason McIntyre, followed by a question-and-answer portion with the audience.

The program will focus on Fields’s experience growing up in segregated Tulsa and her prominent journalism career, including the PBS documentary she wrote and produced, “Goin’ Back to T-Town,” about race relations in the city.

“What an honor to be a part of recognizing the rich heritage of North Tulsa, and to share some of my varied professional experiences! This community has helped launch me, my brother and so many others. It will be a joy to be back home,” stated Fields.

Doors will open at 6:30 p.m., and the event is free and open to the public, but donations will be accepted to support the Shirley Ballard Nero Endowment Fund.

Fields, who resides in Massachusetts, is an alumna of Tulsa’s Booker T. Washington High School and earned her Bachelor of Arts (BA) in journalism from Lincoln University. She went on to receive a Master of Science (MS) in broadcast journalism from at Boston University and received the Nieman Fellowship for Journalists from Harvard University, the only American broadcaster of the 25 American and foreign fellows.

Fields’ interest in journalism was sparked by English teacher Juanita Lewis Hopkins, who submitted her stories to The Oklahoma Eagle.  Later, columnist Jeanne O. Goodwin, known professionally as “Ann Brown” invited Fields to be a guest columnist before she began her journalism studies at Lincoln University in Jefferson City, Mo.

She was part of the Boston Globe team that won a Pulitzer Prize in Public Service for coverage of Boston’s school desegregation efforts. Fields has been nominated for six regional Emmy awards and has won two. Additionally, she received an honorary doctorate of humane letters from Salem State University in Massachusetts.

She is currently both producer and host of a monthly public affairs program on Boston’s Channel 7 called “Higher Ground” in addition to running her own media and public relations consulting firm. Fields is the daughter of famous big band leader Ernie Fields, Sr. and Bernice (Copeland) Fields, who was a Tulsa elementary school teacher, and the sister of musician Ernie Fields, Jr.

Juneteenth is the Texas and Oklahoma regional celebration of the emancipation from slavery following the US Civil War. US General Gordon Granger proclaimed the end of slavery in Texas at Galveston on June 19, 1865. This news and celebration spread to Indian Territory slaves that summer.

For more information about the Oklahoma HOKPOP, please visit www.okhistory.org.

The Shirley Ballard Nero Endowment provides funds to conduct research, programming, exhibitions and events related to the historic All-Black towns of Oklahoma. You can donate to this fund at the Oklahoma History Center or by contacting Angela Spindle at 405-522-0317 or aspindle@okhistory.org.

This article originally appeared in the Oklahoma Eagle. 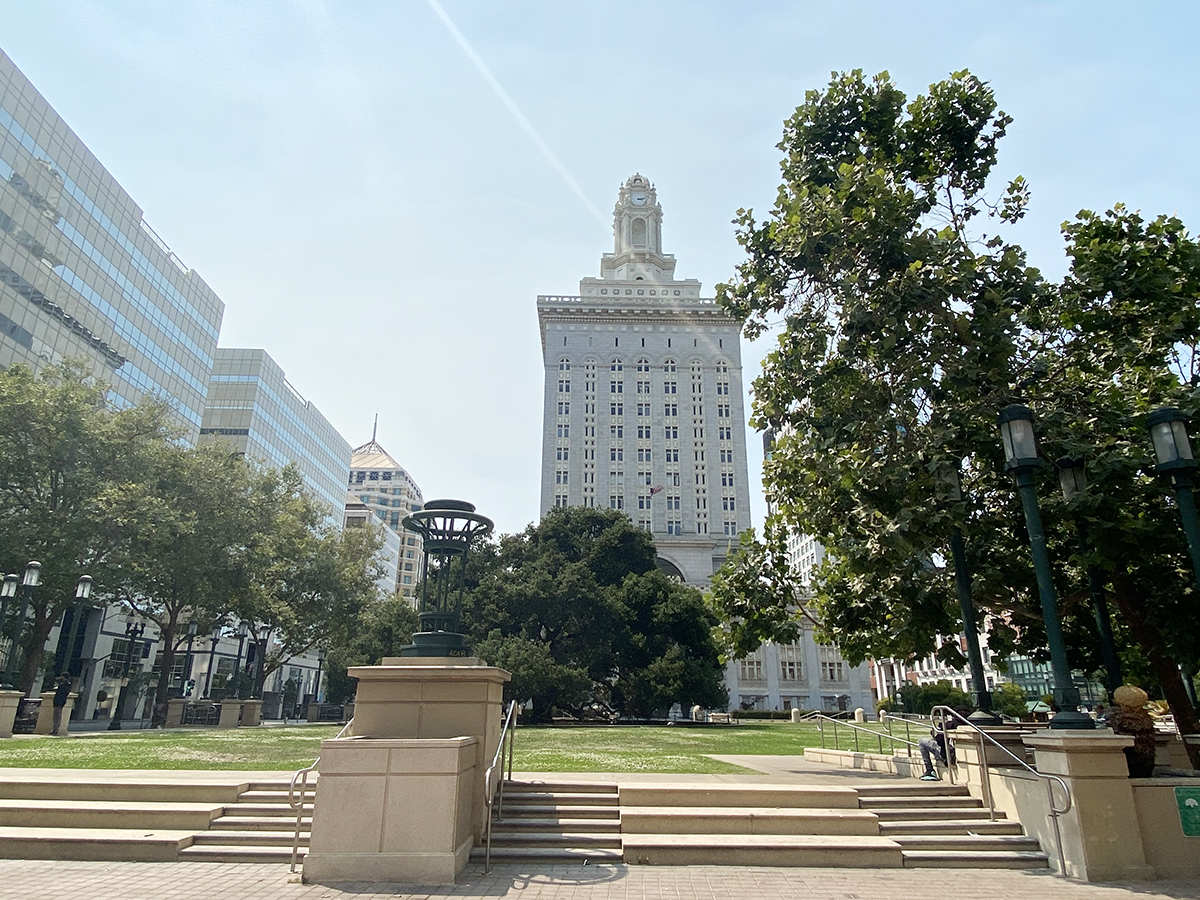 Accordingly, the Post will publish any plans, views and proposed solutions to Oakland’s most pressing problems such as crime, police-community relations, homelessness, housing affordability, illegal dumping, jobs and many more.

I have asked Vice-Mayor Rebecca Kaplan to initiate this weekly series of Mayoral solutions and ideas for progress, because she has extensive governmental knowledge and has served longer than her other colleagues as councilmember at-large, vice mayor, president of the council and has also served as an elected AC Transit board member, as a member of Coliseum Authority and as a member of the Bay Area Air Quality Board among many other civic committees and commissions.

This same invitation will be extended to anyone, especially candidates for Mayor, who want to proffer some serious solutions and plans to bring equity and fairness to the neediest amongst us.

This free space will not be available for personal attacks and critical personality agendas. Any person that announces their candidacy will be allowed to present solutions and answers.

I did not ask the Vice-Mayor if she intended to announce because our purpose is to get Oaklanders focused on the content and responsibilities of leadership far in advance of the election – so that there will be no surprises. It is the Post’s hope that the next leader of this city will be fully prepared and vetted on every possible issue with declared detailed positions.

This is the beginning of the course: Oakland’s Mayor 101.

Even though seven names have already been discussed as the successor to Libby Schaaf, the next Mayor will have to come big with detailed plans – or just stay at home.

The plaque, initiated by former Oakland City Councilmember, Lynette Gibson McElhaney, in 2019 on the 12th anniversary of Bailey’s death and erected 14 years after his death, is installed on a building at 14th and Alice Street in Oakland where Bailey was shot to death on Aug. 2, 2007, while walking to work at the Oakland Post where he was the editor-in-chief. 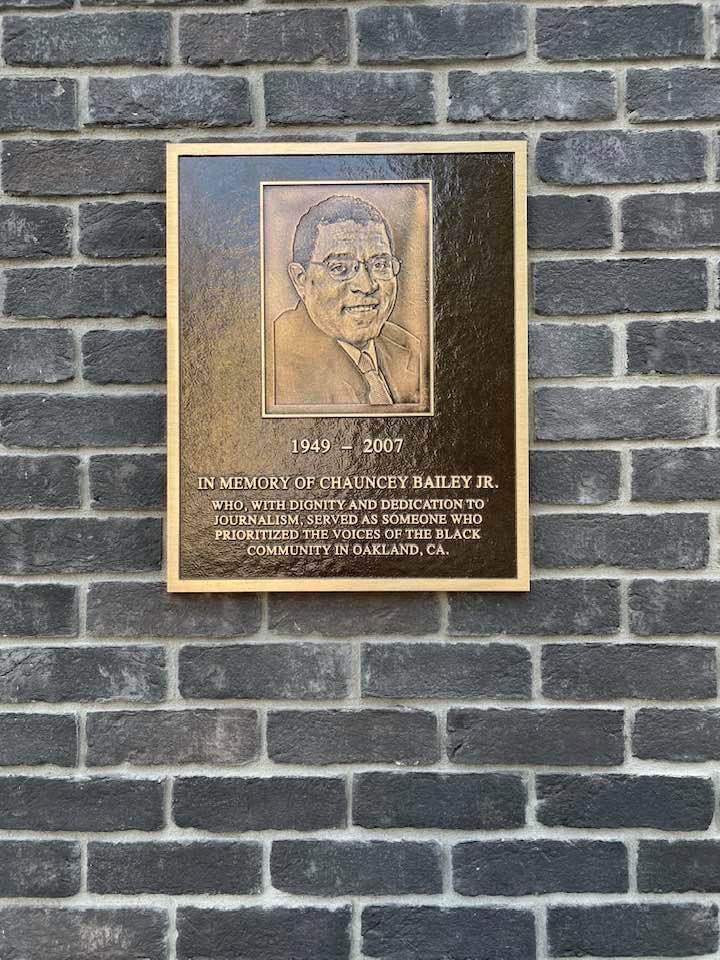 The plaque, initiated by former Oakland City Councilmember, Lynette Gibson McElhaney, in 2019 on the 12th anniversary of Bailey’s death and erected 14 years after his death, is installed on a building at 14th and Alice Street in Oakland where Bailey was shot to death on Aug. 2, 2007, while walking to work at the Oakland Post where he was the editor-in-chief.

At the time, Bailey was working on a story about “Your Black Muslim Bakery.” Beneath the image of a smiling Bailey, the plaque inscription reads: “1949-2007 IN MEMORY OF CHAUNCEY BAILEY JR. WHO, WITH DIGNITY AND DEDICATION TO JOURNALISM, SERVED AS SOMEONE WHO PRIORITIZED THE VOICES OF THE BLACK COMMUNITY IN OAKLAND, CA.”

Thomas Peele, who was the lead investigative reporter on the Chauncey Bailey Project said in 2019, “Bailey needs to be fully recognized as the First Amendment martyr that he was.”

Devaughndre Brousard confessed to killing Bailey and was sentenced to 25 years in prison. Yusef Bey IV, owner of “Your Black Muslim Bakery” and Antoine Mackey were convicted of ordering Bailey’s murder and sentenced to life in prison without the possibility of parole.

Post Publisher Paul Cobb said he was walking to work from the opposite direction to meet Bailey to discuss his plans to visit Vietnam when Bailey was killed.

Inspired by the spirit and enthusiasm for coverage of issues affecting the Black community, Cobb said the Post is still publishing 8 papers and will continue to expand its coverage by recruiting and training more youth interested in media and journalism.

Cobb added: “We are grateful for the city’s recognition of Bailey’s contribution, and we hope that the city actualizes its honor by fulfilling the mission of the Department of Race and Equity by directing the city’s various departments and the Port of Oakland to maintain their support for local Black businesses with advertising and increased public notice publishing. If Chauncey were alive, he would be writing investigative reports about the city’s claims of support to Black Business while simultaneously not providing grants to the media, especially the Post News Group, which more than any other local media, has done more to communicate and educate the citizens of this city about the dangers and solutions to the COVID-19 Pandemic.”