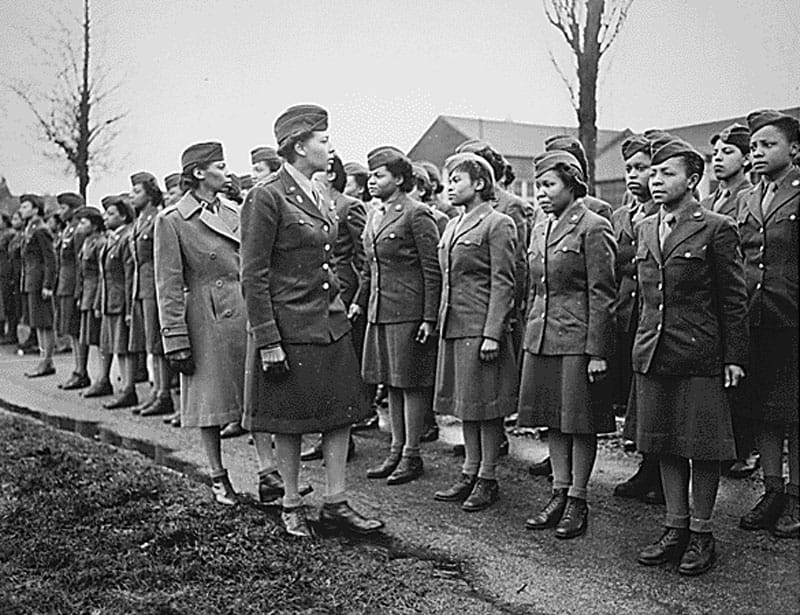 Many historical accounts of war exclude women. The word “soldier” brings to mind immediately a male figure in uniform. Yet by definition soldier refers to anyone, including women, serving in the military.

American women were allowed to serve in the army during World War I (1914–1918). Many were nurses or staff who cooked for and catered to, injured soldiers. Unfortunately, slavery’s shadow and racism prevented black women from giving their services to America, therefore the first women in the military were white.

Women were recruited and trained until May 1942. The Women’s Auxiliary Army Corps was formed, and women of all races were officially allowed to serve. In July of that same year, women were given full benefits in the military, and the word “auxiliary” was removed from their name. The Corps then became known as the Women’s Army Corps (WACs).

The military trained women of all races in all divisions and sections of the army in preparation for war, yet division among the races remained. Black women were encouraged to become WACs, but unfortunately, other divisions, such as the navy excluded Black women almost entirely. The Army Nurse Corps only allowed 500 black nurses to serve despite thousands who applied.

The tables were turned in 1945 when the world’s first all-black female battalion was sent from the United States to serve in parts of Europe during World War II (1939–1945). Many of the women were handpicked by civil rights activist and educator Mary McLeod Bethune.

Known as the 6888 Central Postal Directory Battalion, or “the SixTripleEight,” the battalion served in parts of France and England to clear the backlog of mail in the European Theater of Operations. The battalion boasted 855 black women, both enlisted and officers, and was led by Major Charity Adams Earley. It was the only all-black, all-female battalion overseas throughout the war.

Confronted with racism and sexism from their own leadership and troops, the battalion served with honor and distinction completing their mission in six months. By war’s end the SixTripleEight had cleared over 17 million pieces of backlogged mail ensuring troops stayed in touch with their loved ones back home.

The SixTripleEight had a motto, “No mail, low morale,” and accomplished more than distributing letters and packages. As the largest contingent of black women to ever serve overseas, they dispelled stereotypes and represented a change in racial and gender roles in the military.

Between 1945 and 1946, the majority worked under the mail service. Others served as cooks, mechanics, nurse assistants and in other roles when necessary. Working conditions were dangerous and risky, as women were placed in abandoned and infested aircraft and offices throughout the war.

Women of the SixTripleEight were later honored with the European African Middle Eastern Campaign Medal, the Good Conduct Medal, and the World War II Victory Medal while they were still in service.