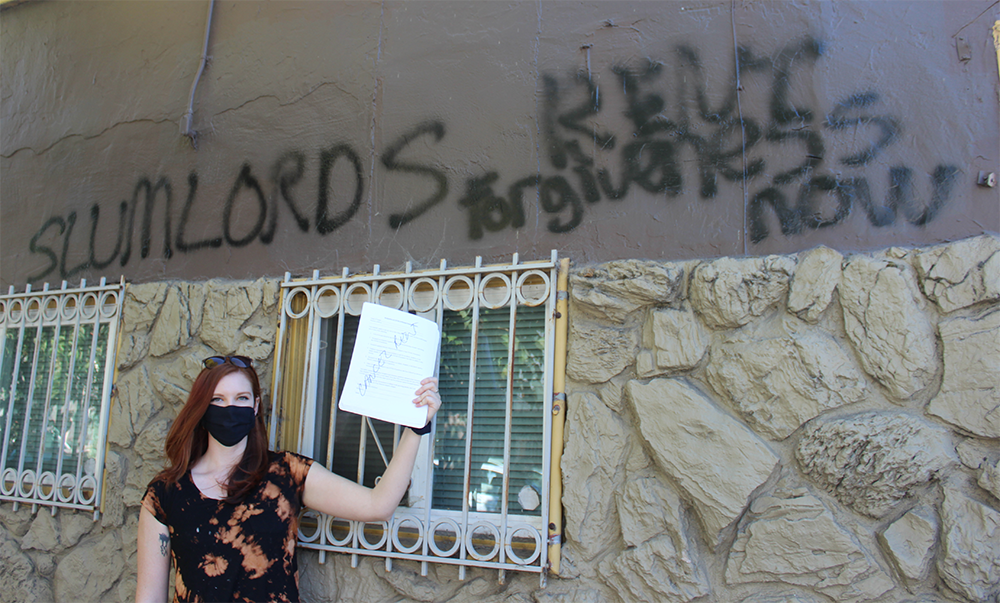 Members and supporters of SMC Tenants Council formed a car and bike caravan rally on Sunday to protest their landlord, SMC East Bay, serving them Pay Rent or Quit notices.

The notices demanded that within 15 days tenants pay back rent or fill out and sign COVID-19 financially related distress forms. That same day, the SMC Tenant Council also e-mailed their landlord asking them to rescind the demand to pay or sign. On Monday, the following evening, their landlord relented, and no longer demanded tenants pay or sign the forms.

“SMC East Bay is just trying to squeeze out any rent that they can by scaring people,” said Katie Brown, just after receiving the demand to pay or sign. She lives in an SMC household, one of over a dozen who received the notices in Oakland.

Starting at 34th and Wood streets in West Oakland, 21 cars, 10 bikes, and about 40 people in total joined the rally. Protestors brought red signs that they attached to bikes and cars. Some of the signs read “Tenants Against Capitalism,” “Cancel Rent,” and “Únase a la unión de inquilinxs” which translates from the Spanish to “Join a tenants union.”

The action sprung from the organizing SMC tenants have done since late March when they unionized into a council and some households began withholding rent in an effort to make SMC East Bay negotiate with them for better conditions and COVID-19-based relief.

While the union is open to negotiations, which SMC East Bay has not yet formally responded to, their main current demand is rent cancellation during the pandemic.

At the rally, the protestors called the notices “illegal” and claimed that they don’t have to sign. Lawyers at the Oakland’s City Attorney’s Office agree that tenants are not required to sign anything to continue to be protected by Oakland’s Eviction Moratorium, which currently prevents tenants from being evicted for non-payment of rent. They are also protected because County of Alameda Courts are not currently serving unlawful detainers due to non-payment of rent.

While the recently passed California state law AB 3088 does not offer as expansive protections for tenants as Oakland’s Eviction Moratorium and requires that tenants sign a form documenting COVID-19 financially related distress for non-payment of rent, Oakland’s law supersedes state law in this instance.

AB 3088 prevents local municipalities from instituting their own new COVID-19 related eviction protections but does not affect any local tenant protection policies instituted before Aug. 19, 2020.

Since Oakland approved their Emergency Eviction Moratorium on March 27, and renewed it on July 21, Oaklanders are still covered until the city declares an end to the COVID-19 related Local State of Emergency and cannot be evicted for non-payment of rent.

Tenants and supporters rallied against the demand to sign or pay by forming a line of cars that continuously honked while driving through West Oakland and Downtown. They went to SMC East Bay’s lease collecting office in West Oakland and wrote the words “CANCEL RENT” on the forms their landlord demanded they fill out, then dropped them into the mail slot.

No one at the rally did any spray-painting, but the words “SLUMLORDS” and “RENT FORGIVENESS NOW” could plainly be read on the SMC East Bay leasing office building.

The protestors also went to City Hall, claiming the city government is not doing enough to protect tenants. At City Hall, they taped posters that read “Scene of a Wealth Crime” and highlighted friendly relations between SMC owner Neill Sullivan and Oakland Mayor Libby Schaaf in a photo of them smiling together.

The poster demanded that the city work to cancel rent during the pandemic and reduce rent after the pandemic.

The SMC Tenants Council has been critical of Sullivan since its inception. Low-income tenants of buildings Sullivan owns complain of rat and mold infestations and deteriorating infrastructure that is not addressed.

They find the lack of action especially troublesome considering Sullivan’s wealth. They point to data from the Anti-Eviction Mapping project that shows he has spent over $68 million, which he obtained from hedge fund investments, buying up over 350 properties largely formerly owned by Black residents who lost them during and after the 2008 recession, then served about 350 eviction notices between 2010 and 2016.

“I got involved with SMC Tenant Council because I was having problems in my house and I was constantly in fear of getting evicted for many years,” said Rizzy, an SMC Tenants Council Member at the rally. They wore a t-shirt that read “All my homies hate Libby Schaaf.”

“When I joined the council I realized I wasn’t alone in this fear,” they said. “I think it’s really great that people are joining together to stand up and get Neill Sullivan to collectively bargain for our demands.”

As the rally occurred, SMC Tenants Council members not present at the rally sent an e-mail to SMC East Bay.

“By now, you are aware of the local eviction moratoria, which this notice violates,” read their e-mail. “We resent and reject your effort to create and exploit confusion in the middle of this pandemic emergency by serving us this notice based on irrelevant state law AB 3088. We know our rights.”

The e-mail later listed their own demand to the landlord.

“Within two weeks of receiving this letter, we ask that you reply in writing to rescind your 15 Day Notices,” the email read.

“In light of your letter and in the spirit of compromise,” read the e-mail, “please let this letter serve as formal rescission of the 15-day notice previously served upon you.”

The SMC Tenants Council saw the response as a win both because SMC East Bay rescinded their demand to pay or sign and because it marked the first time that the large landlord corporation responded directly to the union.

“I’m proud to be a part of this community and this council because our members have been working diligently to make sure we and our neighbors are safe and have a voice,” said SMC Tenants Council member Serena Gafford, in response to the win. “I’m excited to continue organizing because this is just the beginning.”

SMC East Bay was e-mailed a list of specific questions on Sunday morning including ones about their history of evictions, their notices, and whether they recognized the union. In their response, they did not answer those questions directly but touted their work with faith-based organizations and also wrote, “We will continue to follow all state and local laws and never use scare tactics.”