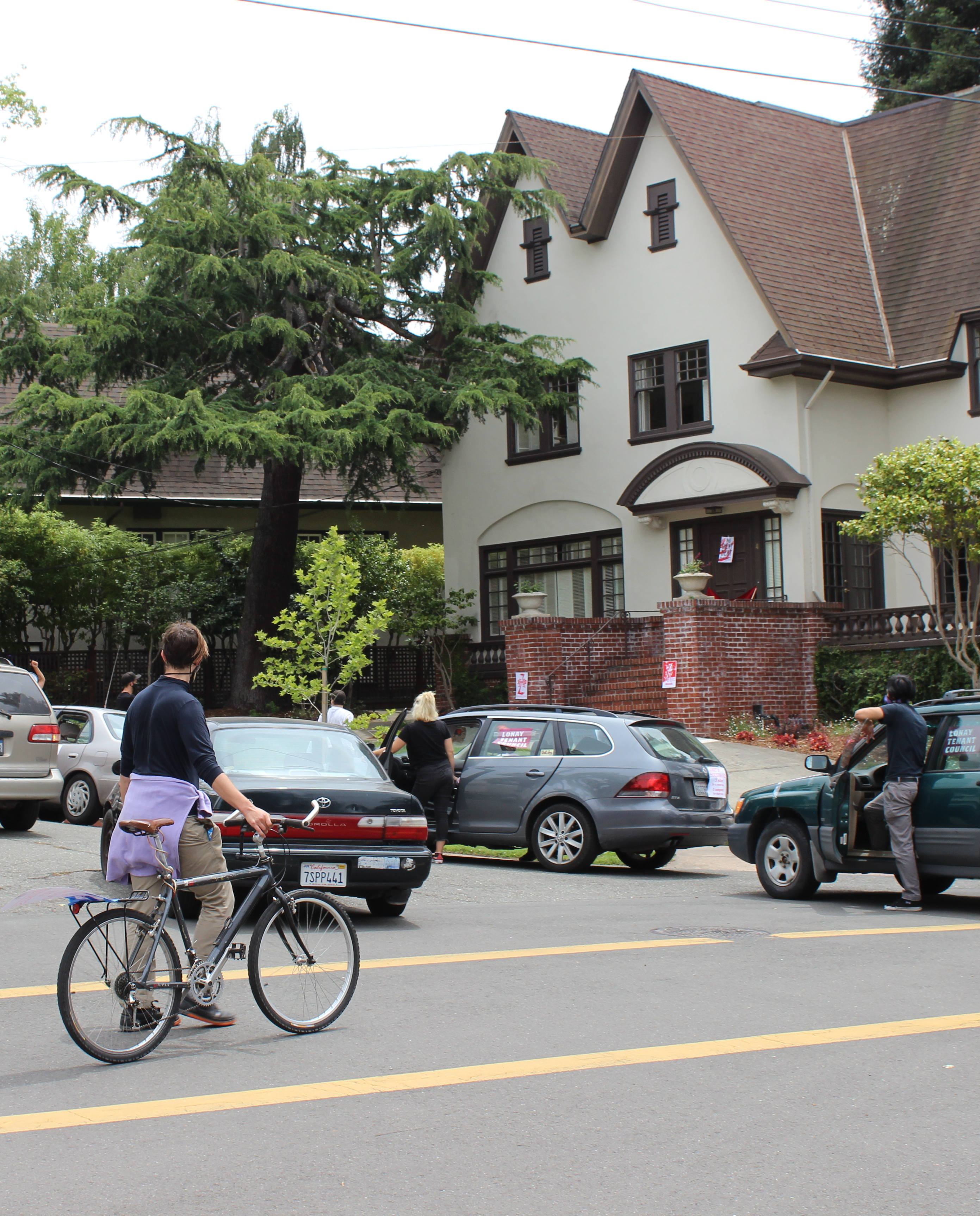 The Lonay Tenant Council (LTC) and supporters formed a caravan of over 40 vehicles and several bikes that started in Oakland last Sunday to protest at two large homes in Piedmont belonging landlords Linda Lonay and Mohommad and to deliver a list of tenant demands.

One member read those demands outside Lonay’s home through a loudspeaker. Those demands include: rent cancellation for those who need it during the pandemic; rent reduction for all until the end of the year; approval of all new tenants moving in; an end to rent increases when a lease signatory tenant leaves, and fixing all mold and disrepair.

LTC and supporters went to Lonay’s home because she has not responded to their requests to negotiate. They attached signs to vehicles and honked loudly while driving through Piedmont.

Shortly after, much of the approximately 60 person crowd chanted “cancel rent.”

“It felt like a release for all of us,” said Michelle Mitchell*, a tenant of Lonay and Hooshmand’s and LTC member. “For the last few months we’ve been under a lot of pressure from Lonay to fork over a lot of money. But we have a lot of people. We know each other. We know what [she’s] doing to us. [She] can’t just knock us around.”

LTC is a group of Lonay and Hooshmand’s tenants who have unionized to make collective demands. Since Lonay communicates with tenants, most of LTC’s organizing has been directed towards her.

Lonay served on Oakland’s rent board from 2011 to 2014. At a City Council committee meeting in 2014, she spoke in favor of a measure she said made it easier for “small-time landlords” to compete with large corporations by limiting rent increases based on capital improvements to 10% per year.

The Oakland Post e-mailed Lonay questions about her requirements for adding new tenants, how she has handled rodent outbreaks, and whether she recognizes the tenant council. She answered with this statement:

“We are committed to complying with all the obligations of rental housing providers, and we are proud of our record,” the statement read.

“We care about our residents, and have been providing financial accommodations to many of them since mid-March, based on their individual circumstances.  We don’t address everyone at once because all of our tenants are individuals, each with their own circumstances.  We take pride in our maintenance record, often receiving commendations for our quick service.  We are all in this together.”

When LTC looked into Lonay’s public records they did not see her as a small-time landlord. She and Hooshmand rent out at least 28 buildings in Oakland and Berkeley and one of their two personal homes in Piedmont is worth approximately $3 million. Under increased economic pressure from the COVID-19 pandemic, many LTC members are withholding rent.

Knowing about Lonay’s wealth and experiencing stress due to her neglect as a landlord has them especially frustrated at what they see as pushy efforts to collect.

Mitchell says Lonay has called her cell phone repeatedly to pressure her for money, but tenants can’t be evicted for rent owed during this time due to city, county, and state legal protections related to COVID-19.

Tenants say Lonay has harassed them by pressuring tenants to move out in the past.

“She has showed up at my house at odd hours,” said LTC member Justin Gilmore. “One time, she arrived at our home unannounced at around 11:00 p.m. wearing all black. That time she came to demand that we vacate and accept a buy-out for a few thousand dollars.”

“The exterior of our house was never properly sealed. But [Lonay] continued to tell us the problem was that we were keeping bags of rice in our kitchen,” said Mitchell.

Some LTC members who have occupied Lonay and Hooshmand’s units for years pay lower than average area rent for rooms because they’re under rent control. But tenants share total costs of multi-room homes and when one tenant moves out, it’s difficult to find a replacement tenant.

De Leon said Lonay demands a credit score of 750 or above to rent a room from her. Other LTC members say she’s rejected potential tenants without reasonable explanation, and that it’s been especially difficult to get Black tenants and other people of color approved. In comments from a 2017 East Bay Express story, Lonay said she sought “young professional” tenants.

The difficult approval process means rooms sit empty and remaining tenants have additional rent burden. When a tenant on the lease moves out and other tenants not on the lease remain, Lonay has raised their rent.

Andrew Levin said Lonay displaced him in 2017 when she raised the rent on his two- bedroom apartment from $2,400 to $3,295, two weeks after his roommate, who was the lease signatory, moved out. Levin then moved out as well. The rent was too high.

LTC said they are fighting back. They have connected with lawyers to make each other aware of their rights. They have used the threat of collectively withholding rent for leverage to negotiate with Lonay, as it is expensive to evict a lot of tenants at once.

The protesters found some support in the community.

“I enjoyed the horn-honking” said Piedmont resident Elise Marie Collins on Twitter, who was teaching an online yoga class as the caravan passed. “I knew it wasn’t a graduation celebration. I could feel the dissent in the sounds.”

Collins also suggested people squat at one of Lonay and Hooshmand’s two homes.

LTC left a list of demands and a “three-day notice to negotiate” with tenants.

*Both Michelle Mitchell and Sofía de Leon are pseudonyms used because they fear retaliation from Lonay and Hooshmand for speaking about them. 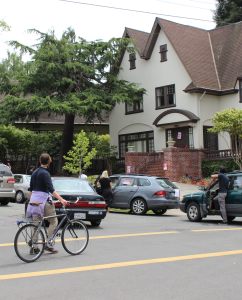 Lonay Tenant Council and supporters protest outside the Piedmont home of landlord Linda Lonay and Mohommad Hooshmand’s  after delivering a list of tenant demands outside their door.