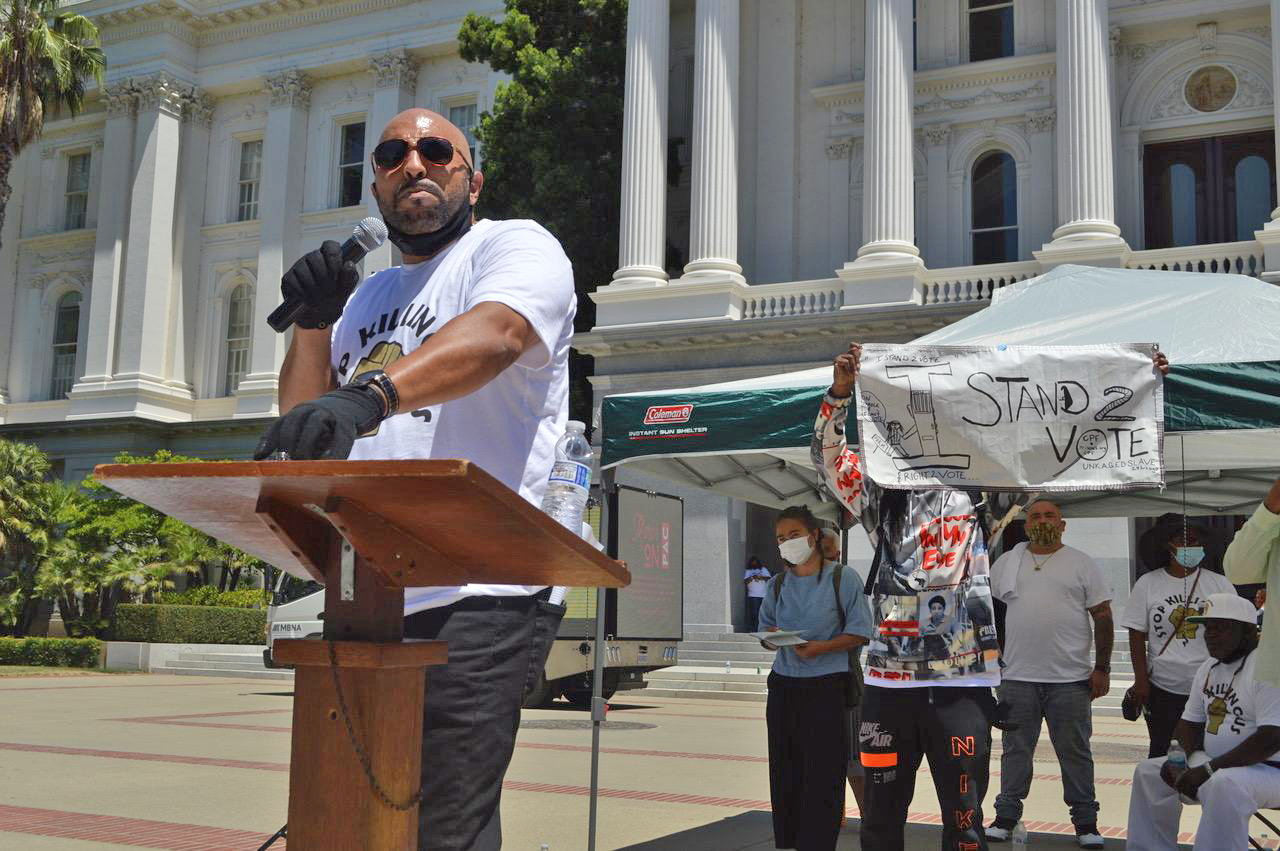 Several California social and criminal justice organizations, as well as community-based groups, gathered for a rally at the state Capitol titled “Stop Killing Us” on July 1, 2020.

Oakland-based All of Us or None (AOUON) organized the event — with the help of other partners across the state — to condemn police violence against African Americans. 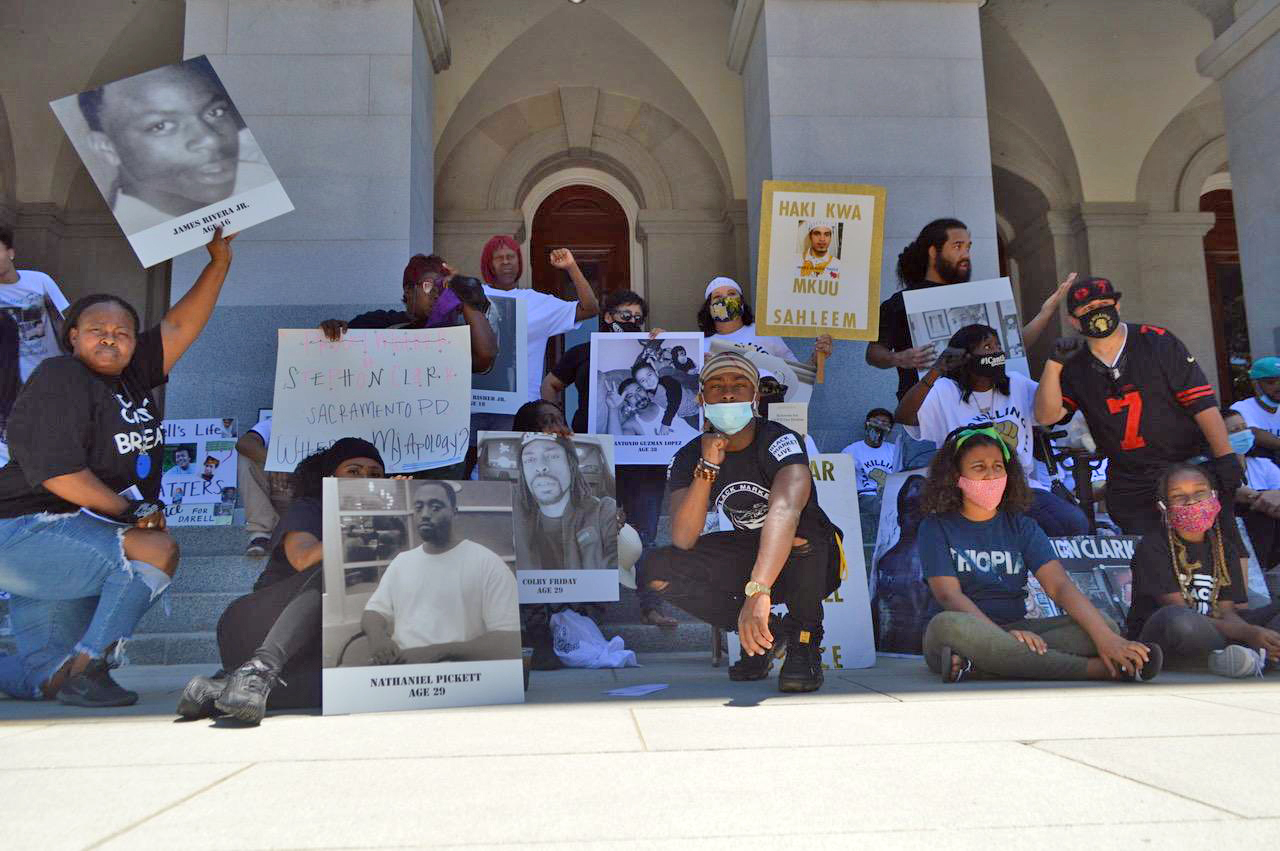 Families affected by police violence came from all across the state to participate in the Stop Killings Us Rally in Sacramento. Photo by Antonio Harvey.

AOUON is a project of Legal Service for Prisoners With Children (LSPC), a nonprofit civil rights organization that advocates for the rights of formerly and currently incarcerated people and their families.

Their demonstration was peaceful — done with official permission — and less spontaneous than recent explosive protests and riots triggered by the brutal murder of George Floyd, an unarmed Black man in Minnesota, at the hands of police officers.

But it was charged with strong convictions and a solemn sense of grief, much like those protests. The day started with libations and sacred drumming by American Indian and African American groups. Altars with photos, food offerings and a memorial quilt were also on display.

“You mess with our children, I’ll come running,” said Yolanda Banks, the mother of Sahleem Tindle, who was killed by a BART police officer on Jan. 3, 2018. He was 28.  “I have to march,” Banks continued. “We fight together.” 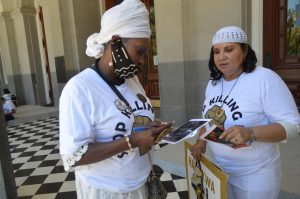 Banks frequently joins other grieving African American families from around California who have lost loved ones to police violence for rallies and vigils like the one AOUON held in Sacramento.

Participants arrived from Riverside, Los Angeles, San Bernardino, Bakersfield, Vallejo, Richmond, Oakland, San Francisco, Fresno and other places in the state. Most of the people in attendance were people who have been impacted by police violence.

On the front steps of the State Capitol, large black-and-white photos of people of color who have been victims of police deadly force were on display. According to Love Not Blood Campaign, organized by Oscar Grant’s uncle Cephus Johnson, police violence has claimed the lives of 1200 people in California since 2009.

Asale-Haquekyah Chandler (pronounced “Ah-SAH-lah”)  made the trip east to Sacramento from San Francisco to support Banks and the other families involved with “Stop Killing Us.” Chandler is hosting the “One Life Walk: A Silent Walk Parade Protest” in downtown San Francisco July 28.

Chandler, who ran unsuccessfully for the San Francisco Board of Supervisors District 10 seat in 2018, has also been affected by violence, but not at the hands of law enforcement. Her 19-year-old son Yalani Chinyamurindi, while on a lunch break in San Francisco, was shot and killed, along with three individuals he knew.

Banks, who lives on a rural farm in Calaveras County, told California Black Media that the events that AOUON stage are “painful but therapeutic.”

The pain and passion expressed by Banks, Chandler, and other participants (who each read aloud the names of the departed) was evident.

There were new members to this circle of grief and woe. Relatives of Erik Salgado, killed by the California Highway patrol in Oakland on June 6, and San Francisco’s Sean Monterrrosa was killed on June 2 by police in Vallejo.  They praised their predecessors for the work done to get justice for their loved ones.

McCarty authored a constitutional amendment, ACA 6, which will be on the general election ballot in November. Known as the “Free the Vote Act,” ACA 6 will seek voters’ approval to restore voting rights to former inmates on parole.

Posing as a Sports Project – Commentary