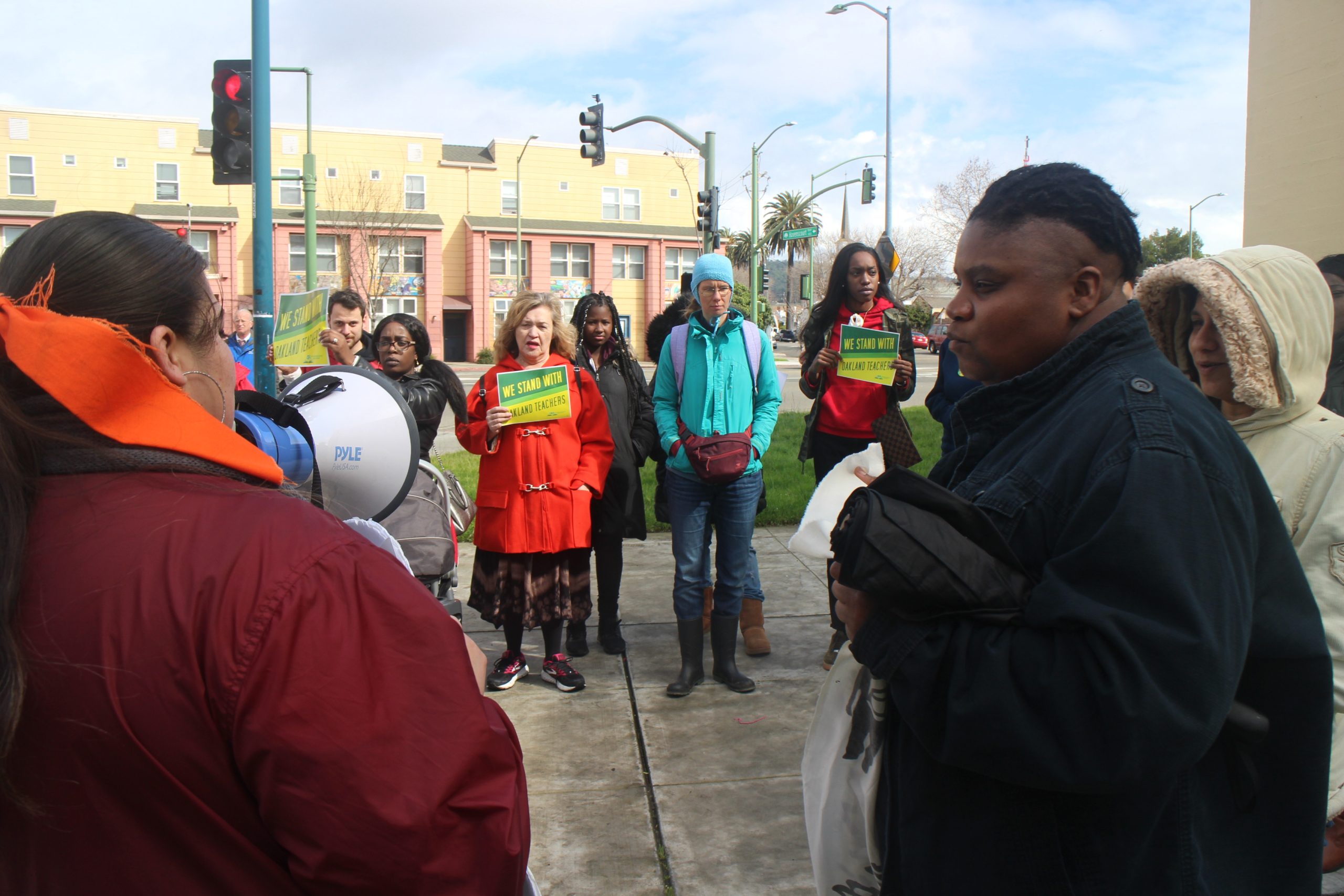 Parents at targeted schools are beginning to come together to demand the school district and the state halt the proposed closing of as many as 24 Oakland schools in the next few years.

The first speaker at a rally last Friday on a cold and blustery morning in front of one of the targeted schools, Roots International Academy, was Tamella Jackson, educator and parent at Kaiser Elementary School, which is on the school board’s closure list.

“Closing schools displaces (students) and causes family strains so parents can’t take of their kids. We’re slowly understanding and letting more and more people know that this system is set up to fail us,” Jackson said.

“None of us here are going to stand for letting you displace us or choose which teachers you want and what type of schools (we will have),” she said. “I’m speaking directly to the State of California.  Give us our damn schools back.”

Roots parent leader Ady Rios has been active in the fight to save her son’s school since December when the district first announced that Roots would close in June.

“We’re here to fight for our kids. We’re here to keep our schools open,” she said.  “We know that another 23 schools will be going through this. We’re not going to let them take those schools.  We’re going to fight. This is just the beginning.”

Teacher education professor Kitty Kelly Epstein said she was inspired by the commitment and perseverance of Roots parents and teachers “to fight with the school board to show them that their assessment of their school is totally wrong.”

The board justifies its decision based on “bogus” numbers, she said, racially biased test scores that do not prove what they claim to prove, and assertions that closing schools save money, which has been shown to be false in urban school districts across the country.

The district claims it would save a small amount of money—$325,00—by closing Roots, a neighborhood school at 66th Avenue and International Boulevard, currently serving 309 students.

But in a report issued last Friday to the state-appointed fact finder, OUSD wrote that “the district’s attempts to close schools have been difficult and have not led to significant reductions in cost over time.”

When OUSD officials realized that this statement was included in the report, they asked everyone in the room to rip that page out of their binders and return it to the district.

Meanwhile, the school district is moving ahead with plans to lease school property to charter schools for as long as 40 years and has set up a surplus property committee to sell public school parcels to developers and charters.

The pressure to dispose of public property district comes directly from the state and raises the question of what state legislators are doing to defend the existence of public education in Oakland and other urban districts.

According to community members speaking at Friday’s rally, Assemblymembers Rob Bonta and Buffy Wicks and State Senator Nancy Skinner have a responsibility to intervene against school closings and the selling and leasing of public-school land,

According to the law, OUSD can get a loan from the state if it “sell(s’) or lease(s) surplus real property… owned by the school district and uses the proceeds from the sale or lease to service, reduce, or retire the debt on the emergency apportionment loan, or for capital improvements.”

The state law also hands over significant decision-making control over school district finances to the Alameda County Office of Education and the state-funded nonprofit agency, the Fiscal Crisis and Management Assistance Team (FCMAT).

The law said the district is required, “in collaboration with and with the concurrence of the Alameda County Superintendent of Schools and the … Fiscal Crisis and Management Assistance Team, to take certain actions (FCMAT) by March 1, 2019 regarding its financial plans and school district construction plans.”