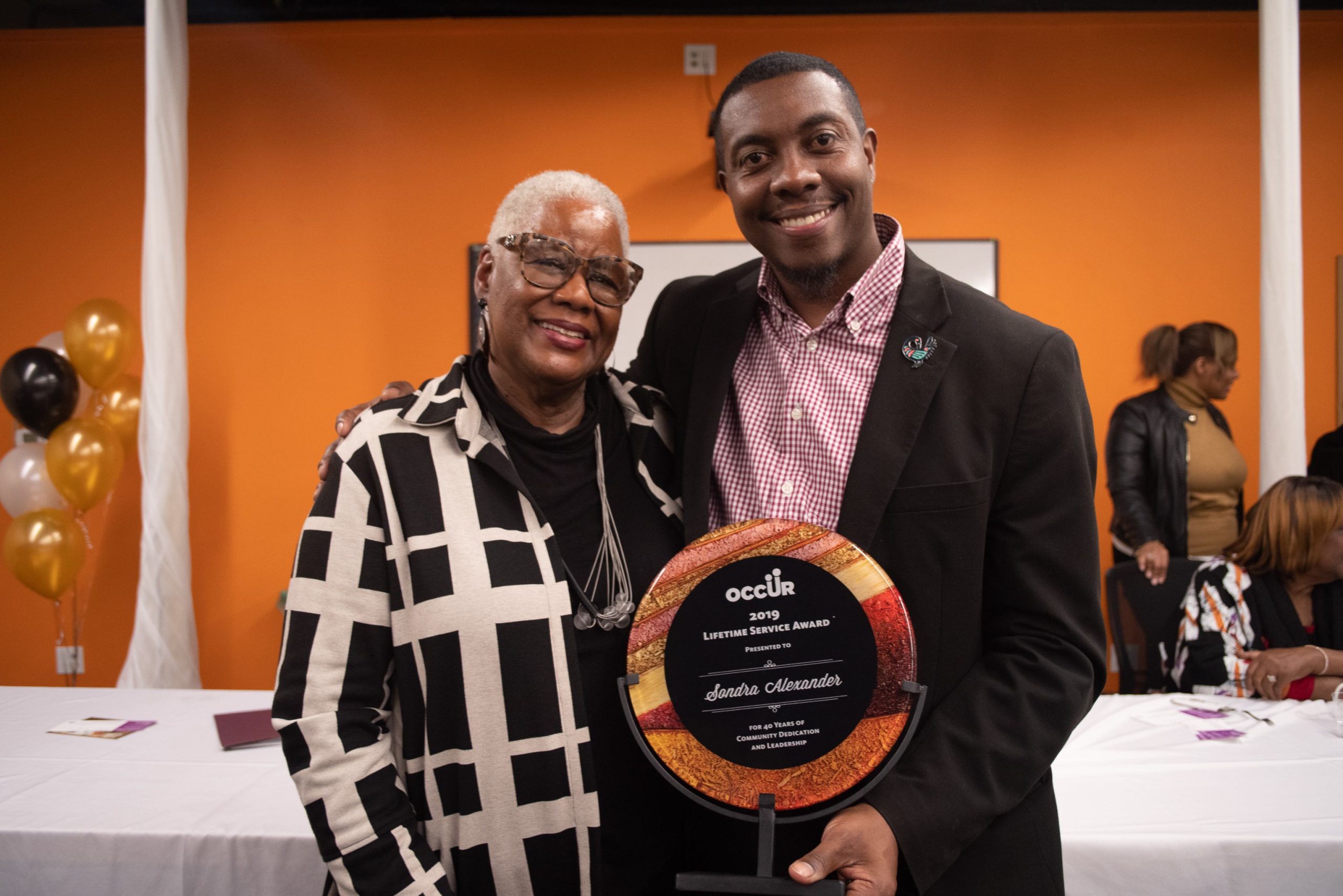 Last week, Sondra Alexander quietly ended her 40 years of service at the Oakland Citizens Committee for Urban Renewal (OCCUR), the advocacy group that formed in the 1950s to close the gaps between rich and poor neighborhoods.

Alexander began her career at OCCUR in the late 1970s as assistant to Paul Cobb, now the Post News Group publisher, who led the program for her retirement party on Dec. 5.

Held at the David E. Glover Education and Technology Center in East Oakland, a project of OOCUR’s that she helped spearhead with its namesake, David Glover, who died in 2013, Alexander was praised and remembered by current and former OCCUR employees alike, bringing smiles and a few tears.

Glover’s sister, Angela Blackwell, founder of Policy Link,  was present with her son, Fred Blackwell, who recalled coming to OCCUR offices as a child and simply feeling welcomed by Alexander. “That’s a big deal for a 9-year-old,” said Blackwell, who is now CEO of the San Francisco Foundation.

Olivia Cueva, the David Glover Center’s executive director, praised Alexander for her compassionate guidance and leadership, while OCCUR executive assistant Charla Montgomery regaled the attendees on her first few weeks at the job when she learned the value of multi-tasking, self reliance and pinching pennies for the greater good.

Also present were some of Alexanders’ sisters Ida, Nuna Mae, Donna, Crystal and Ennis along with many relatives and friends. Known for her strong faith-based and family ties, Alexander pledged to continue her support and involvement to keep the organization strong.

Over the years, Alexander served as director of administration and executive director. She will be replaced by Shomari Carter, a former staff assistant to Alameda County Supervisor Keith Carson.

If you ask Alexander to list her OCCUR related accomplishments, her answer would be “That’s difficult to say, because OCCUR’s successes are the result of a team effort.”

While it’s true that it takes an effective and cohesive team to fully achieve success, but there is always that one person that welcomes the challenge, assumes the responsibility, pulls the team together, manages the effort and does whatever it takes to ensure success.  For the last 40 years, that person has been Alexander.

Throughout Sondra’s extensive career, she remained firmly rooted and driven in achieving the overall goal of raising the quality of life for all of Oakland/East Bay residents, but particularly for those in the greatest need.

Alexander was instrumental in developing and executing OCCUR’s place-based digital training project initiative — The Eastmont Technology Center, which was renamed for David Glover at her behest

As a result of her leadership efforts, DEGETC has gained increased notoriety throughout the San Francisco Bay Area as cutting age training program providing thousands of low-income adults, youth and seniors with the skills needed to participate in the technology-driven economy.

She said she would marshal the efforts of her childhood friends Dr. Arnold Perkins and Paul Cobb to continue to support OCCUR’s fundraising programs..

Opinion: Trump is Leading a Revolution That is Destroying America