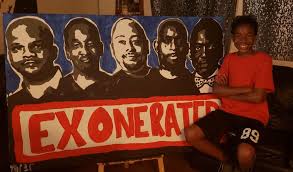 Tyler Gordon with his painting of the Central Park Five. The men were falsely accused of rape and assault in 1989. Black Enterprise photo.

A San Jose teenager was selected by Time magazine to paint the portrait of its Athlete of the Year, Lebron James.

Tyler Gordon, 14, an avowed L.A. Lakers and Golden State Warriors fan, believes James is one of the greatest players to ever play the game. “I am honored to be painting his portrait for TIME,” he said.

Gordon is the son of a painter and he got his start at the age of 10 when he dreamed of taking up the craft. His mother, Nicole Kindle, bought him a canvas and other supplies that week.

He proved he had talent when a portrait of his school principal won an art contest. Since then, he has painted more than 500 portraits of Black icons, including one of The Central Park Five, which sold for $100,000.

“Working hard makes you a contender but believing in yourself makes you a champion,” said Gordon about James, but the accolade could be said about Gordon himself for having navigated physical handicaps from early childhood.

For two years, he was in a wheelchair having suffered broken hip and leg bones because of a Vitamin D deficiency. He stutters because he was born deaf and underwent surgery at 5, which gave him some hearing.

He was bullied so badly in school, he was afraid to speak, said Kindle. Now, she can’t get him to shut up, she said of the teenager who is a wizard at making grilled cheese sandwiches, prefers online school so he can wear pajamas all day, gets in trouble for pranking people. He’s earned his mother’s displeasure recently by spilling pink paint on the carpet.

“Sometimes I can’t talk and get words out, so I speak through my art,” Gordon told Time magazine, which chose him as one of five Kids of the Year, the first time this category was set up.

According to Time, his big break came in 2018 when a portrait of basketball star Kevin Durant caught the eye of the player’s mother who bought it for $300. Commissions from other celebrities poured in, among them Janet Jackson, Alex Rodriguez, Kevin Hart, Jennifer Lopez and Janelle Monae.

Last month, he got a call from Vice President-elect Kamala Harris when a portrait he did of her went viral. He was thrilled to hear from her and called her ‘humble’ for taking the time to call him while she was at home making Thanksgiving corn bread for her family.

The media attention has meant he is also losing self-consciousness about his stutter. A corner of his living room is his ‘studio’ where he conducts online painting classes, titled “Tongue Tye’d,” a venue he hopes to inspire other kids to overcome their challenges using art as well.

Time Magazine and the SFGate were sources for this report.