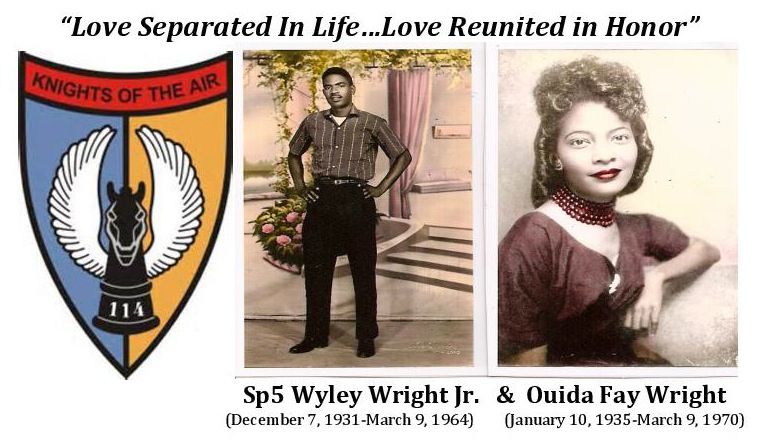 “Love Separated in Life…Love Reunited in Honor“(doc, 14min) by Jackie Wright starts at 3:45 p.m. Crossing history, time, social mores and seas, The Wright siblings honor Sp5 Wyley Wright Jr. (who died as an honor guard for Secretary of Defense Robert S. McNamara early in the Vietnam War) and “the wife of his youth,” Ouida Fay McClendon Wright, with a ceremony in Arlington National Cemetery, after exhuming him from a segregated cemetery in Jacksonville, Florida 50 years after his death.

Within a year, the ceremony in Arlington, ultimately led the Wrights to Vietnam, where they found the land in Vinh Long, Vietnam that had been named after their father, “The Shannon Wright Compound,” an honor they had no knowledge of growing up in the shadows of Fort Benning, Ga.

The trip to Vietnam found them on the land where the 114th Aviation Company had served and they connected with the family of Vietnamese photographer who had made the last wedding anniversary gifts of Sp5 Wyley Wright Jr. for his beloved ‘Ouida, the Love of My Life’ on their eleventh wedding anniversary.
“Afro-Germany” by Susanne Lenz-Gleissner, Jana Pareigis and Adama Ulrich – Documentary (42 min), takes place at 2 p.m.

“Where do you come from?” “I mean, where do you really come from?” Hamburg-born Afro-German journalist Jana Pareigis has been asked these questions throughout her life. Traveling across Germany, she meets a refugee who was a victim of right-wing violence, as well as stars such as the rapper Samy Deluxe, the football player Gerald Asamoah and the contemporary witness Theodor Wonja Michael. They depict life as a Black person in Germany – and what needs to change.

“Rolling in the Deep” (short, 12min) by Marcellus Cox – starts at 3 p.m. A young African American man travels home to South Carolina looking to achieve a goal for his late Father by having a meal at a locally famous Whites Only Diner.

95 Never Looked So Good (9m, U S A) dir. by Tymm Holloway – This Documentary short, highlights Simeon Holloway accomplishments from early beginnings to the prominent historical record of his involvement in the elite first all-Black US B-1 Navy Band. The first African Americans to serve in the modern Navy at any general rank with no recognition from the Navy.

“Brown Babies: Deutschlands Verlorene Kinder” Directed by Michaela Kirst of Tangram Films: “In 1946, the first of the babies fathered by members of the occupying forces are born in war ravaged Germany. Around 5,000 of these children have an Afro-American father and a German mother.

Many of these ‘Brown Babies’ grow up in Germany. What nobody realizes, however, is that many more babies were given up for adoption and subsequently went to live with new, African American parents in the USA. Both the American and German governments saw this as a convenient solution to an awkward problem, since the very existence of the ‘Brown Babies’ represented a scandal on both sides of the Atlantic. The adopted ‘Brown Babies’ grow up thousands of miles away from their real mothers and the country of their birth. Many of them don’t discover for decades that they have a German mother. Others however, can remember all too clearly the derogatory looks they were subjected to in Germany. Even in the USA, these ‘Brown Babies’ weren’t really accepted anywhere – too dark for the whites and too light for the Afro-Americans…”