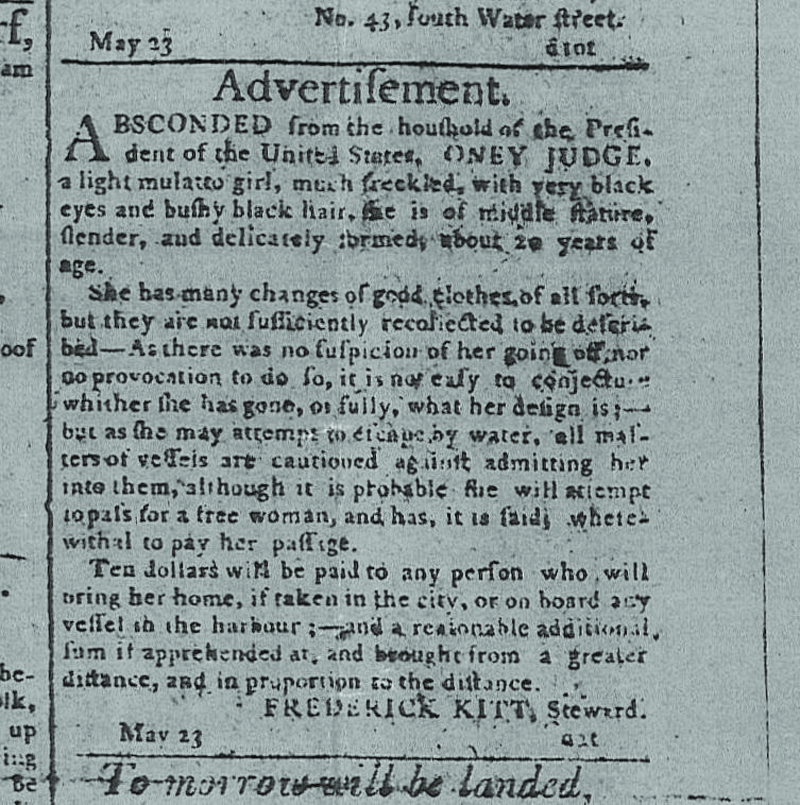 Slavery was a cruel and miserable time for people of color. Often beaten, tortured, and separated from their families, the enslaved people’s resistance to captivity took many forms, including devising means of escape.

Not even George Washington boasted a level of influence that would prevent the personal servant of Martha Washington, Ona Judge (1773–1848), from escaping his Philadelphia mansion.

It was during a presidential dinner that Judge packed her bags for freedom. She had been put on notice that Martha Washington was going to give her to George Washington’s granddaughter. During an 1845 interview Judge said, “I had friends among the colored people of Philadelphia, had my things carried there beforehand, and left Washington’s house while they were eating dinner.”

Judge purchased a ticket for a ship bound for Portsmouth, N.H. In order to protect the ship’s captain, John Bolles, Judge would not mention his name for many years. “I never told his name till after he died, a few years since, lest they should punish him for bringing me away,” she said.

Judge decided to settle in Portsmouth, where she married and gave birth to three children.

In the meantime, the Washingtons learned of Judge’s whereabouts, and were making attempts to recover her. Over the course of their lives, the couple owned hundreds of slaves, but they especially viewed Judge as Martha Washington’s personal property.

According to some historians, Washington hired a man named Bassett to locate Judge and return her to the couple’s Mount Vernon home. He ordered Bassett to use force, if necessary, to persuade her to cooperate. But Bassett was unaware that Judge had allies in Portsmouth.

Bassett, during his mission, was to stay with John Langdon, governor of Portsmouth. But unfortunately for Bassett, Langdon was opposed to slavery, and alerted Judge to Bassett’s arrival. Judge, however, didn’t need these warnings.

Judge stood her ground on her own and resisted Bassett’s attempts to coerce her back into slavery. “I am free now,” she told him. “And choose to remain so.”

Later Judge would give a series of interviews to abolitionist newspapers. She alleged that the Washingtons administered brutal punishments to rebellious slaves, and tried to circumvent Pennsylvania’s 1780 gradual abolition law by moving slaves to and from the state every six months.

Washington, for his part, wrote that he was shocked at Judge’s “ingratitude,” lamenting that she had fled “without any provocation.” He rebuked claims that Judge was treated unfairly and denied that she requested to be freed when Martha Washington died. Washington dismissed it as “totally inadmissible” and said that giving into Judge’s demands would “reward unfaithfulness” and lead the “far more deserving of favor” to mutiny.

After Washington’s death, according to a statement by Judge, the family never bothered her again.

Judge’s three children predeceased her, as did her husband. Because of the Fugitive Slave Act of 1793, signed into law by Washington, she lived the rest of her life as a fugitive.