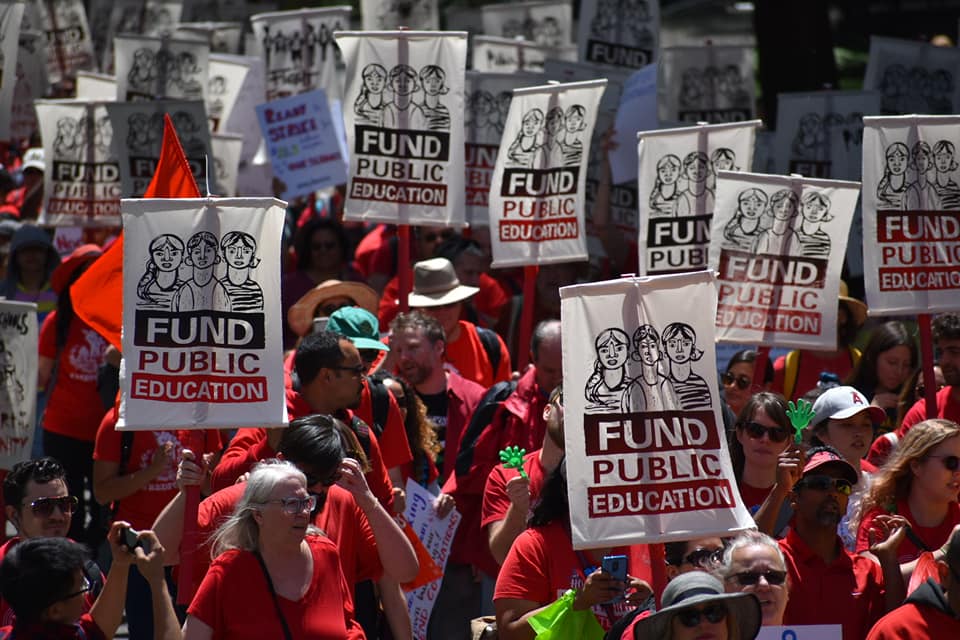 Thousands of California teachers, students and school officials—from Sacramento, Oakland, San Francisco, Richmond, Los Angeles and other school districts, marched through downtown Sacramento and rallied at the State Capitol this week, demanding major funding increases for public education and the passage of legislation that would limit the unchecked growth of charter schools.

The protest, part of the national “Red for Ed” movement, comes as many school districts are facing austerity measures – drastic budget cuts and teacher shortages.  A teacher strike wave continues to sweep the country, and many school districts in California, including Oakland, Los Angeles and Union City, have seen walkouts this year.

“For too long, we have been on a starvation diet for our schools,” said California Teachers Association President Eric Heins.

Teachers are supporting a package of bills that would regulate charter schools.

“Charter school laws are basically destroying public education and we don’t think a dime of public funds should go to corporate charter organizations,” said California Teachers Association Vice President David Goldberg. “Every school should serve the needs of the community.”

“We’re being proactive,” said Washington Elementary teacher Janine Waddell in an email, according to Berkeleyside. “Our district has been making cuts, and now it’s time to urge the state for more funding so that our schools can serve all of our students.”

The State Assembly on Wednesday passed AB1505, one of the pieces of legislation backed by teachers, which would give local school districts sole control over the establishment of charter schools within their boundaries. The bill now goes to the State Senate.