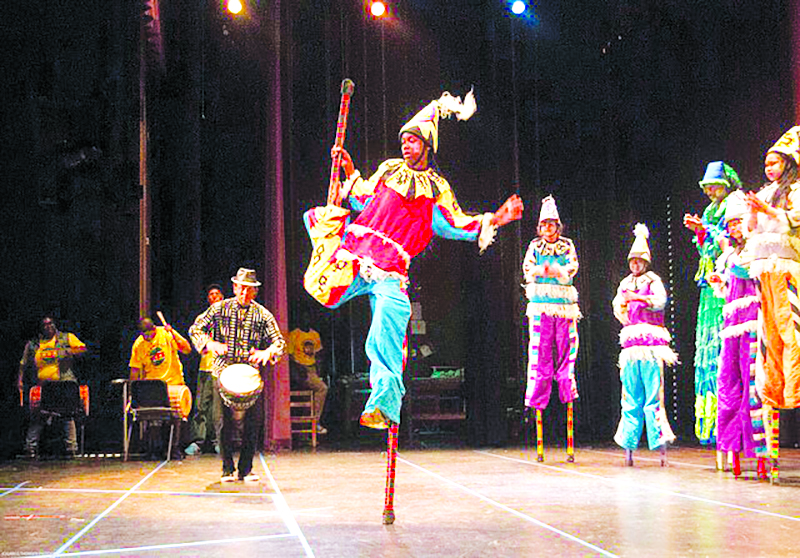 Seven young stars from the Prescott Circus Theatre, an afterschool and summer youth circus program born out of Prescott Elementary in West Oakland 33 years ago, will be traveling to Trenton, N.J.. on August 16 for the American Youth Circus Festival. They will be accompanied by the group’s artist-in-residence (who is also a wellness coordinator for OUSD) Lance “Unique Derique” McGee, educator and circus coach, Ceara Walton, and the organization’s executive and artistic director, David Hunt.

The group will be taking the national stage to perform their act, “Higher Ground, A Tribute to the African Roots of Stilt Dancing” as part of the festival’s showcase that features selected acts from around the country. The choreographed stilt dance honors the traditions of West African stilt dancing as they were taught to Prescott Circus by Baba Shaka Zulu, a third generation stilt dancer from New Orleans.

The youth will also be assisting both McGee and Walton in leading workshops on the traditional Hambone Body Percussion, an expressive form that was born from the resilience of enslaved Africans in the United States. For most of the youth, ages 7 – 16, this will be their first time traveling outside of California and flying in an airplane.

“The opportunity to travel, to go outside my own community, and perform and interact with others, had a pivotal role in my success as an adult,”  said former Prescott “Clown” Edward Smith Lewis, who now works for the United Negro College Fund in Atlanta and serves as treasurer for Prescott Circus.

“I did not have this opportunity when I was a student at Prescott so I’m really excited to help be a part of making this happen for my students,” said Ceara Walton, a former student-now-instructor who will be leading the program at Prescott Elementary starting this fall.

“We have a national reputation for youth’s talents and our commitment to equity. All of our programs are 100 percent free- that’s not what you see in many circus programs around the country. This is an incredible opportunity for our youth and we are excited about how they will bring this experience back to inspire others students. Our children are going to be real ambassadors,” said David Hunt, executive/artistic director .

The organization is working hard to raise the funds to help cover travel costs. The public is invited to assist by making a donation to Prescott Circus through a giving page on Generosity.com. Checks can also be sent directly to Prescott Circus at 800 Pine St.#10, Oakland, CA 94607.