Over 100 community members attended a discussion held by leaders of the International Longshore and Warehouse Union (ILWU) Local 10 on Sept. 21, to oppose the Oakland Athletics’ plans to build a new ballpark at Howard Terminal.

“This is not about baseball, this is about gobbling up land, this is a real estate investment,” said event organizer and former ILWU Local 10 Secretary-Treasurer Derrick Muhammad as he addressed the crowd gathered at the West Oakland Senior Center.

The A’s proposal to build a stadium at Howard Terminal on the Port of Oakland includes the construction of 3,000 condominiums, a 400 room hotel, and a multi-million dollar gondola to transport fans to and from the park.

ILWU leaders and West Oakland community members expressed concerns about the implications of a ballpark on the city’s industrial waterfront. 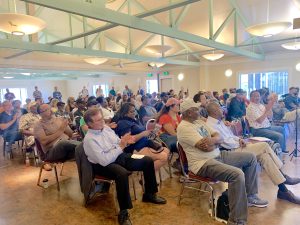 Over 100 community members and port workers gathered at the West Oakland Senior Center to oppose the A’s plans for a new ballpark at Howard Terminal.

“We believe that once you start placing houses adjacent to industry, you subject that industry to complaints of the neighbors,” said Muhammad, who fears that in the long run Oakland could suffer the same fate as Detroit, which some have called a “ghost town” in reference to large swaths of the city that were abandoned after the decline of the automotive industry between 2008 and 2010.

The A’s plan to flank their new ballpark with 3,000 apartments, in the middle of Oakland’s industrial hub where air pollution is some of the highest in the Bay Area. A few hundred yards adjacent to Howard Terminal, recycling plant Schnitzer Steel grinds up and recycles on average over 500,000 metric tons of cars, household appliances and scrap metals per year, according to their 2017-2018 Sustainability Report. While the company has significantly reduced emissions in recent years, during the day acrid smells waft from the plant on to the Howard Terminal lot.

Meanwhile, the A’s are promoting their project as an environmental solution. A Feb. 15  report by the San Francisco Chronicle found that decades of industrial activity had contaminated the soil and groundwater at Howard Terminal with “hazardous” and “cancer-causing chemicals,” that would require removal prior to construction.

On their website, the A’s pledge to “fully remediate these environmental issues at no cost to taxpayers,” along with the rest of the project that they promise will be “100 percent privately financed by the Oakland A’s.”

This statement comes in contrast to a California bill in the works, SB 293, which would potentially allocate millions in public tax money to cover costs for anything from transportation and waste management, to the “remediation of hazardous materials,” on the Howard Terminal property.

If signed by Gov. Newsom, SB 293 will fund the infrastructure needed for the ballpark by creating a new Oakland tax district and will cover any costs related to making the Howard Terminal site buildable and accessible. Major challenges facing the project include sea level mitigation, removal of toxic waste, and transportation infrastructure. 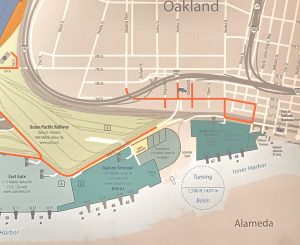 A map depicting the current access points for the Port of Oakland and Howard Terminal.

Aaron Wright, ILWU Local 10 business agent, called the stadium nothing short of a “billionaire’s dream,” and said that the A’s have not taken into account the implications of building on such a challenging site. At the event, he urged community members to “say hell no”  to allowing their tax money to subsidize a “billionaire’s condo paradise.”

Howard Terminal is a 50-acre site with a single access point via Market Street. It’s one-third of the size of the Coliseum, which spans 150 acres, and is nearly one mile from the nearest BART station.

Wright also takes issue with Howard Terminal being touted as an “unused” site by project supporters.  According to him, the lot serves as an important hub for the hundreds of truckers entering and exiting the port each day, who would otherwise be parking on Oakland streets, clogging the freeways, and increasing pollution in residential West Oakland.

“Howard Terminal actually took that traffic off the streets and gave them a place to stage their loads…it really is a mechanism to keep trucks off the road, to keep trucks out of West Oakland streets,” said Wright.

Due to the spatial restrictions of the lot, the A’s plan to build a substantially smaller parking lot for the stadium, and want to encourage sports fans to leave their cars behind by building a $123 million gondola that would transport up to 6,000 fans per hour per direction from West Oakland BART station to Jack London Square. 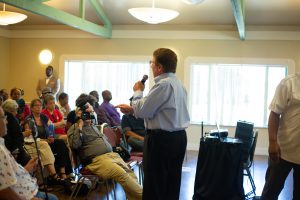 “The west Oakland community — if that stadium is built — will become the parking lot of the Oakland A’s. There is no way that you will be able to control 20 or 30,000 sports fans coming to a stadium on the waterfront,” said Andrew Garcia, president, and director of marine transportation company GoodBulk Ltd., who also spoke at the event.

Another concern for the ILWU is the “turning circle,” a widened part of the estuary where large cargo ships turn around between loading and unloading. The largest ships can barely turn in the existing space and require careful maneuvering from the bar pilots, who have also opposed the stadium over concerns that lights from the new stadium will blind them. As ships get bigger, the Port will no longer be able to accommodate them unless the estuary is adapted, Wright said.

In response to the concerns, the Port of Oakland has laid down its conditions in a project overview and reserved the right to expand the turning basin up to 10 acres of Howard Terminal. The residential development would only be permitted on the side further away from the industrial operations and would have to include a “comprehensive transportation and circulation plan” to ensure that Port operations remain unaffected.

Still, Muhammad suspects that if the project moves forward, there will be larger socio-economic implications.

“This project would be the last few nails in that coffin of gentrification that west Oakland currently finds itself in,” said Muhammad, who expressed skepticism at the 5,000 jobs that the A’s promised to generate with the new ballpark.  He and other industry workers are concerned that the new employment opportunities will consist of low-paying, part-time service jobs — aside from the promised 2,000 construction jobs, which Muhammad argues are temporary.

In addition to the stadium at Howard Terminal, the A’s wish to purchase the Coliseum land from the City of Oakland. Preliminary digital renderings show the 150-acre lot transformed into a large green space surrounding an open-air baseball diamond, flanked by shopping centers, a university campus, and residential areas — including affordable housing.

“Howard Terminal is a 50-acre site…that needs a huge amount of funds to make it buildable. And you could go over to the Coliseum — three times as large, 150 acres — and build three times the stadium and hotel and houses over there, tomorrow,” said Wright.

The ILWU is confident that their movement will grow as stadium plans move forward. They are currently working on building alliances with other local industries and non-profits in the area, as well as residents of East Oakland and West Oakland, and urge those who oppose the project to attend future meetings.

The Oakland Post has reached out the the A’s, and welcomes their response to the concerns covered in this article.

For more information about the movement against the Howard Terminal Ballpark, contact Derrick Muhammad at dmuhammad@gmail.com, (510) 435 2713.