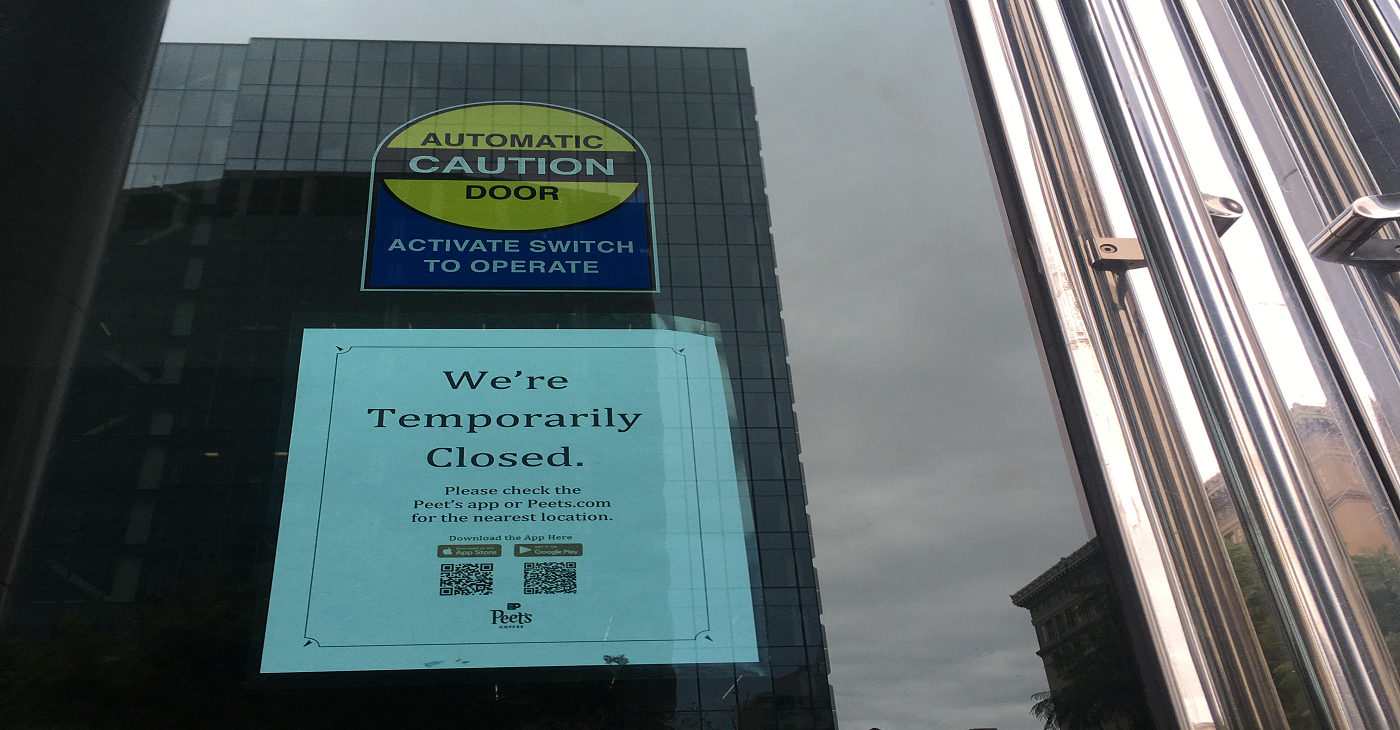 A sign on the door of Peet’s Coffee at 1111 Broadway in downtown Oakland announces that the store is temporarily closed. The COVID-related temporary closure started December 5 and ended on December 14. Photo by Zack Haber on December 11.

Since workers currently employed at Peet’s said they feared retaliation for speaking out, and ex-workers said they thought naming themselves could make securing new employment more difficult, all workers and ex-workers in this article appear under pseudonyms. They are all in their early 20s and make or made around $16 an hour.

“I couldn’t bear it anymore,” said Stephanie, who recently decided to quit working as a barista at Peet’s after a year and a half. “I would go to work crying, come home crying. I had nightmares and panic attacks at the thought of being a conduit for the virus and getting people sick because of the exposure I had to endure.”

Both Stephanie’s onsite manager and the systems Peet’s is using in Oakland and Berkeley stores made her feel “genuinely unsafe.” She found herself dealing with customers who would take their masks off to taste drinks or use facial recognition on their cellphones. Regular customers would dismiss her requests for them to keep their masks on in her presence, which she attributed to her manager, Sarah Louis, creating an environment that was “lax about mask regulations.”

“[Louis] invited people to do tastings and drink their drinks inside,” said Stephanie. When she would complain about feeling unsafe and asked for support in enforcing mask-wearing, she said the manager told her she should seek employment elsewhere. Louis has not responded to an e-mail requesting her comment on this story.

Since mid-November, Peet’s employees working at a store on Broadway in downtown Oakland as well as a store on Domingo Avenue in Berkeley have tested positive for COVID-19, resulting in both stores temporarily closing. After the positive cases, Peet’s has continued its regular policy of shuffling employees from their regular work site to one of over a dozen different stores in Berkeley and Oakland when staffing shortages occur.

The shuffling policy concerns Stephanie and other Peet’s workers, like Timothy, who has worked at Peet’s for over three years. Timothy’s regular work site is different than Stephanie’s and he has a different manager. He feels his manager does their best to keep his work site safe and appreciates that they are strict about enforcing mask-wearing. But the shuffling policy makes him feel unsafe.

“It’s hard to do a risk assessment when you’re going to another store,” said Timothy. “That can be kind of scary.”

Citing “the privacy of Peet’s employees” a spokesperson for Peet’s media team declined to comment on how the shuffling policy works or reveal how many employees have tested positive for COVID-19 in Berkeley and Oakland stores.

Timothy said that COVID-19 safety precautions “really vary from store to store,” and that the company is not transparent about which stores have had positive cases or the virus-related benefits the company offers.

Informed by Peet’s management that he had been exposed to the virus when he took a shift at the Domingo Avenue store, Timothy took some time off to get tested by using some of the 36 hours of COVID time Peet’s offers. But Peet’s had never told him taking the paid time off was an option. He found out about the benefit himself by searching through Peet’s web site. He was not required to quarantine and went back to work after a negative test and being cleared by a doctor.

Michelle, a Peet’s employee who works at the same site Stephanie did, said that even after she informed her manager that she had been in close contact with people who had tested positive for COVID and likely had been exposed, she was still encouraged to return to work because she was asymptomatic and had not tested positive herself.

“There was no forethought about the risk,” said Michelle.

“[Management] doesn’t let us know about anything so we think we should be more transparent with each other,” said Michelle. “We all know that there’s outbreaks because we hear about it through the grapevine.”

In at least one instance, employees think management attempted to stifle such communication. Jessica, another Peet’s worker, was concerned she might have COVID so she got tested. Her test came back negative and she communicated that information on a digital chatting platform called Slack that employees had been using to communicate with each other, mostly about scheduling.

She said Louis had repeatedly told her not to communicate about COVID-related issues to other staff due to confidentiality issues, but Jessica thought only posting information about her own status would not create a conflict.

“Within a few hours the entire Slack page for our group was deleted,” said Jessica. When Jessica asked why it had been deleted, Louis told her it was due to Jessica posting a meme after the presidential election that made fun of Donald Trump, as political posts weren’t allowed.

“At this point I knew she was just trying to cover her” butt, said Jessica. “The timing didn’t add up.” The Slack chat was deleted a month after the election.

Although Peet’s media team did not answer specific questions about their shuffling practices, mask usage, paid sick leave, or the Slack chat shutdown, they did respond with an e-mailed statement that addressed some of these issues broadly.

“Peet’s uses the most current guidance and updates from the Center for Disease Control and Departments of Public Health to inform our process and procedures for handling COVID-19 related issues in the workplace,” reads the statement. “This includes protocols such as specialized cleanings of our coffee bars, health and wellness checks for our employees, mask, hand-washing and distancing protocols, employee notifications upon an incident of a positive COVID case, and quarantine periods for employees’ consistent with CDC guidelines. We have company paid sick-leave programs and also follow local and/or state paid leave requirements for COVID specific situations.”

But many Peet’s workers do not feel safe. Michelle has cut her hours back to one day a week and is planning on leaving the job as soon as she has secured a new job she finds safer.

“I like making coffee,” she said. “I just don’t want to die or kill anyone.”

Related Topics:featuredPeet's Coffee
Up Next