Over 1,000 Bay Area March in Solidarity with Asians Against Hate and Violence
Advertisement 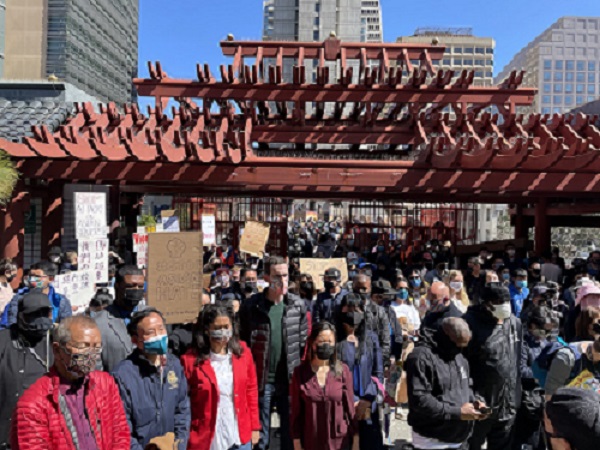 Over 1,000 people rallied in San Francisco last weekend to stand in solidarity with the Asian community against racist hate and violence. Photo courtesy of SF Mayor's Press Office.

More than 1,000 people demonstrated in San Francisco this past weekend, marching down Market Street to express outrage and call for united community action against Anti-Asian hate and violence.

The protest began in the San Francisco’s Castro District at 17th and Castro streets, where LGBTQ leaders spoke out against the racist attacks. Mayor Breed said, We’re going to bring something back something similar to the Guardian Angels (in the 1980s).

“In the neighborhoods, where we have our seniors, we’re going to protect them and look out for them,” she said.

In an interview, Mayor Breed said, “These attacks are devastating- because this community has already suffered enough, and the worst part about is that that they are elderly people, in pretty much every single instance,” she said.

Breed said that in the next few days, she will announce major new programs “to keep the community safe.”

While the city will increase police response in affected neighborhoods, she said, “We all have to take responsibility.”

“We have to hold the perpetrators of these crimes accountable for what they have done,” she said.

The rally in San Francisco was one of the largest of a number of protests across the country over the weekend.

In Atlanta, where six people died in a recent shooting at massage businesses, hundreds gathered near the Georgia Capitol  to demand justice for the victims and  condemned racism, xenophobia and misogyny.

In Chicago, about 300 people held a rally, and in New York City, hundreds marched from Times Square to Chinatown.