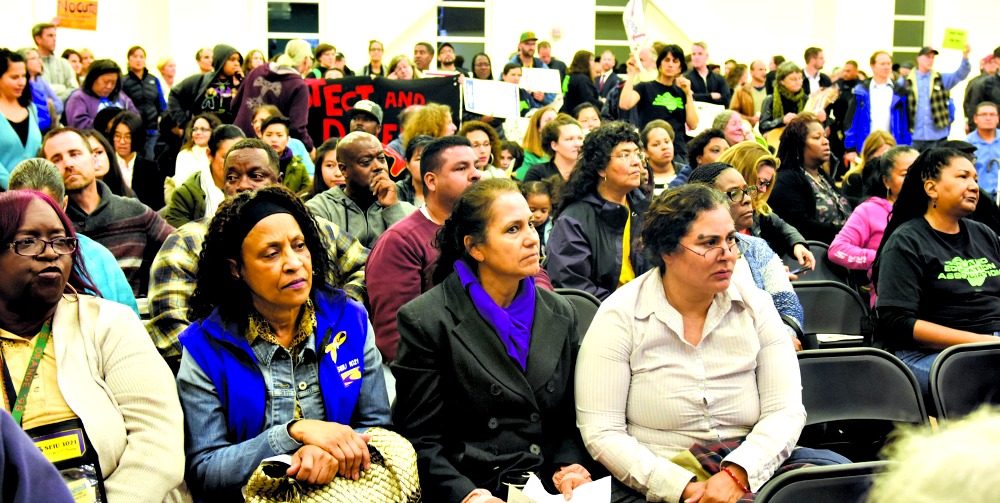 Supt. Kyla Johnson-Trammell says difficult steps are necessary to maintain stability
Hundreds of chanting protesters – teachers and school workers, parents and their children – filled the Oakland Board of Education meeting room this week to attempt to pressure the school board to halt or reduce the mid-year budget cuts that will directly impact schools and classrooms and result in layoffs of many low-wage school employees.
Monday evening’s meeting had been scheduled to vote on proposed cuts, but the school board is now considering ways to avoid some of the school site budget reductions.
The board’s Budget and Finance Committee is scheduled to discuss the proposal at its Thursday, Dec. 7 meeting, and the final decision on cuts is scheduled for Wednesday, Dec. 13.
Speaking to the crowded room – amid chants of “Chop from the Top!” –  School Board President James asked for people to discuss “how these cuts will land on you” and to propose solutions.
“The board absolutely understands that you are upset about any threat to your students,” he said. “Our goal is to listen this evening.”
“I want you to know no decisions have been made about (the size of the cuts). No decisions have been made about (what to cut at) a school,” said Harris.
The room quieted as Supt. Kyla Johnson-Trammell outlined the district’s precarious budget situation and a proposal for recovery.
“As your new superintendent, I have inherited this fiscal challenge and now the responsibility to right the ship,” she said. “I acknowledge and understand the hurt, frustration and anger that everyone is feeling.”
She said some of the economic decisions made in the past two school years were made with the best intentions – for libraries, early childhood education and the Oakland Athletic League – but without regard to the impact on the overall budget.
“We have to look at what we’re going to divest in to make sure we are solvent,” she said. “That is where we fell short in the last two years.
“I know this information isn’t positive but it’s important to be transparent every step of the way about where we are – the good, the bad and the ugly, when we make mistakes.”
Some of the budget cuts at school sites and the central office are necessary to guarantee stability and avoid state takeover, she said. The needed money includes $1.2 million for the state-mandated reserve; a contingency reserve for unforeseen expenses totaling $7.2 million; and $4.7 million to support special education, a program that always costs more than the limited funding the district receives from the state.
The district may be able to postpone an additional $2 million in cuts the board had intended to use to begin to restore the depleted self -insurance fund, she said.
However, she said, budget reduction at both the central office and school sites are unavoidable.
Speaking to the Post after the meeting, Oakland Education Association (OEA) President Trish Gorham said, “I think it was long overdue, a small step in the direction. Some of the board members finally admitted their lack of oversight.
“The pressure of the community had them reduce the cuts – slightly. I feel more optimistic now that we can keep the cuts away from the school sites and the lowest paid workers.”
JoAanna Lougin, executive director of United Administrators of Oakland Schools, told the Post that responsibility for the district’s current crisis should be borne by much of the district’s top management.
“It’s poor management on the part of a whole lot of people. They took advantage of the situation. Now the workers are having to pay the cost for this with their jobs,” she continued. “There need to be consequences for these actions.”

Hundreds of teachers, school employees, families and community members attended the Oakland Board of Education Monday night to protest mid-year budget cuts that would mean reducing programs for children, cutting school supplies and laying off low-wage workers at schools. The board is expected to make a final decision Dec. 13. Photo by Ken Epstein.

HAIR’itage The Play Comes To Oakland