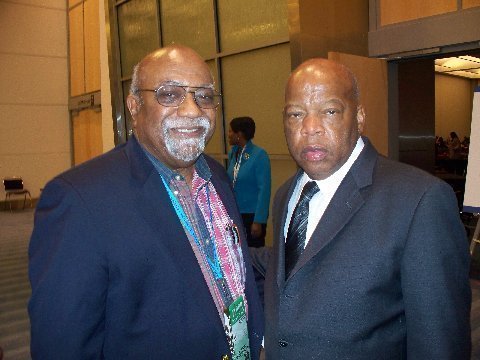 The news of the passing of two veteran Civil Rights leaders and giants John Lewis and C.T.Vivian, on the same day, jolted the nation’s consciousness, especially around the need for Blacks and other minorities to continue to register, vote and fully participate in the census to assure our voices are heard. They were considered “prophetic activist pathfinders” in the biblical tradition of Jeremiah “running to and fro through the streets, looking for a man to execute justice.”

The news of their passing jolted the nation’s consciousness, especially around the need for Blacks and other minorities to continue to register, vote, and fully participate in the census to assure our voices are heard.

They gave their lives to make sure we are counted so that we can benefit when the roll is called in the upcoming November election — and when the trillions of federal dollars are distributed in 2021.

John Lewis, a minister and an Atlanta congressman from Alabama, shed blood in Selma to earn his civil rights icon status. He continued his indefatigable dedication for voting rights, from his participation in SNCC and VEP (Voter Education Project) until the day he died at 80 in Atlanta. Lewis had collaborated with Vivian while studying theology in Nashville, and the two of them were among the original 1961 Freedom Riders seeking to expose racism and to integrate southern facilities.

C.T. Vivian, a minister and Southern Christian Leadership Conference organizer who pioneered the politics of constructive confrontation behavior in employing voter registration strategies, also shed blood in Selma one month before Lewis, when he confronted Sheriff Clark. Both he and Lewis attracted national media coverage for their courageous challenges. Their sacrifices woke up the nation to the fact that Black votes mattered.

Their struggles and deaths remind us of the courageous volunteerism of the students and activists, who were mostly white, and had worked side-by-side with the Black faith-based community in 1964 and were among those arrested and killed for the right of Blacks to vote. Vivian, 95, like Lewis, was an activator who stirred the pot of activism that motivated organizers like Rev. William Barber and Stacey Abrams. He too died in Atlanta just hours before Lewis.

Lewis and Vivian joined Rev. Joseph Lowery, who also died this year at 98 in Atlanta, the birthplace of Dr. King.

I had the opportunity to march and work with both ministers Lewis and Vivian since the 1965 Selma, Alabama Voting Rights March 1965 as a student, reporter, faith-based organizer and field director for the Southern Elections Fund and the Southern Regional Council, also headquartered in Atlanta.

While my wife Gay Plair Cobb and I lived in Atlanta from 1973 to 1977. Gay was director of the Department of Labor’s Women Bureau in Atlanta before serving in Washington, D.C. with former Secretary of Labor Alexis Herman. We rented the home of Jane Bond and Howard Moore and utilized our residence for many “organizing gatherings and meetings” with many people from the network of civil rights activists.

The Southern Elections Fund (SEF) was headed by the legendary Julian Bond who was also a Student Non-Violent Coordinating Committee (SNCC) founder and member of the Georgia Legislature. Bond served as SEF Chair while Yancey Martin, who was a top advisor to Senator McGovern’s Presidential Campaign,  was the Director. My job was to travel throughout the 11 southern states of the old confederacy to help organize voting and election strategies for Blacks. We helped raise funds and provided voter strategies for hundreds of Blacks, including Mississippi congressman Bennie Thompson (see SEF Ebony March 1975, story www.postnewsgroup.com).

I hope faith-based leaders, the Congressional Black Caucus, civil Rights activists and the participants in the Black Lives Matter Movement will dedicate their efforts to monitor the electoral process and demand that the DigiTech companies not become complicit with efforts by those who seek to suppress the Black vote.  When I delivered the commencement address at Holy Names University, I challenged the students and the University — since it is in the heart of Oakland with a history of civil rights activism — to commit themselves to the causes of voting, census and ethnic studies in our schools. The passing of Lewis, Vivian and Lowery should resurrect a spirit of activism in all of us.

The Post will continue to provide information on voter suppression tactics. We will monitor social media and any attempts to discourage the Black vote.

California Split Over Vote That Could Raise Some Property Taxes