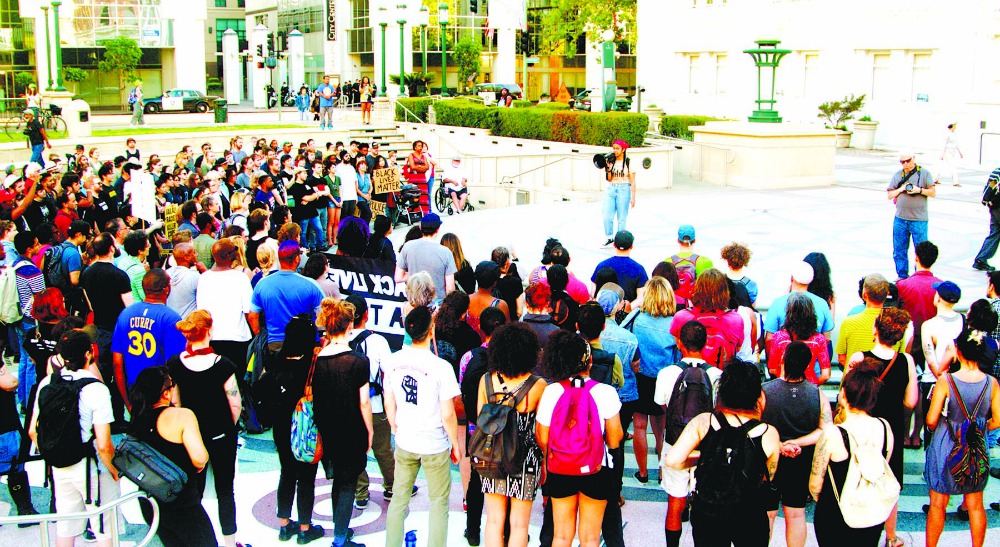 A subdued crowd of about 200 people gathered in front of Oakland’s City Hall to protest last Friday’s verdict in the case of the policeman who killed Philando Castile in a traffic stop in St. Anthony, Minn., in July of last year.
Oakland’s impromptu rally, held last Saturday evening, was one of many held across the nation after the acquittal of Officer Jeronimo Yanez.

Captured on video and broadcast live on Facebook by his girlfriend, Diamond Reynolds, Castile’s death shocked the nation, occurring just one day after Alton Sterling died at the hands of police in Baton Rouge, La.

The public outcry in 2016 included Minnesota Gov. Mark Dayton and led to the rare arrest of Yanez, who shot Castile even as he was complying with Yanez’ request to show his license.

It seemed, at the time, that for once a Black life would matter.

That it didn’t was all too much for 16-year-old Lucy Siale. Unable to accept that Oakland did not appear to be rallying behind the Castile family in particular and Black Lives in general, Siale took things into her own hands.

From behind the closed door of her Walnut Creek bedroom, Siale, a Tongan student at North Gate High School, mounted the call for the rally on Facebook even while her parents inquired what she was doing.  Carrying signs that read “Black Lives Matter,” the mostly white crowd began to chant that slogan while they waited to see who was organizing thee protest.  Dressed in rolled-cuffed jeans and T-shirt, a red bandana tied over hair braided in two long plaits, Siale stepped up like she had been leading protests all of her life.

After leading call-and-response cheers, Siale smoothly outlined the program for the evening.  “We have to fight with and for Black people,” Siale said and exhorted the crowd to remember that Black people have been at the forefront of resistance in the United States for hundreds of years and deserve much more respect than they get.

To prove her point, she told the crowd that the primary people who would be speaking to them that night were to be Black: even the non-black people of color were asked to fall back. After a long pause, Oakland native Jena Terry took the stage.

“If you wonder why nobody came up right away, it’s because we’re tired,” she said. “We’ve been talking. Nobody’s been listening.” 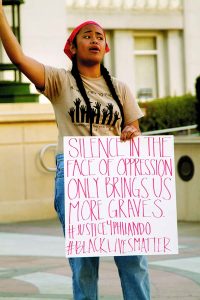 San Leandro nurse Leslie Silket, who turned down a shift to come to the rally, said sacrifice is necessary to support the mothers who had no choice in becoming part of this “club.”

“I am here because Philando’s mom compelled me to be here,” Silket said, recounting that her 18-year-old son’s new habit of putting his license on the dashboard of the car so he doesn’t have to reach in his wallet in case he is stopped by police.
“Everybody can do something. Write a check, buy a latte for a homeless person.”

Gilda Baker became a member of that club in 2005 when her son, Diallo, was killed in a hit-and-run motorcycle accident with the CHP.

Young pastor Leon Scoggins of The Life Church at the DeFremery Recreation Center said, “God is not pleased with police terror,” and that the community should not have to face that battle by itself and the church should be more involved.
Siale asked for nine Black people to come to the dais, where she distributed candles for them to hold. Requesting a moment of silence to think of the lives lost, “the Black lives that should still be here,” Siale then asked the non-Black members of the crowd to do more than lip service to the pain of Black people.

“Provide them with resources, but most of all give them something they can’t touch. Give them love. They deserve it. Now, raise your fists.”
Siale waited until the fists were up and called out one last time: “Black Lives Matter.”