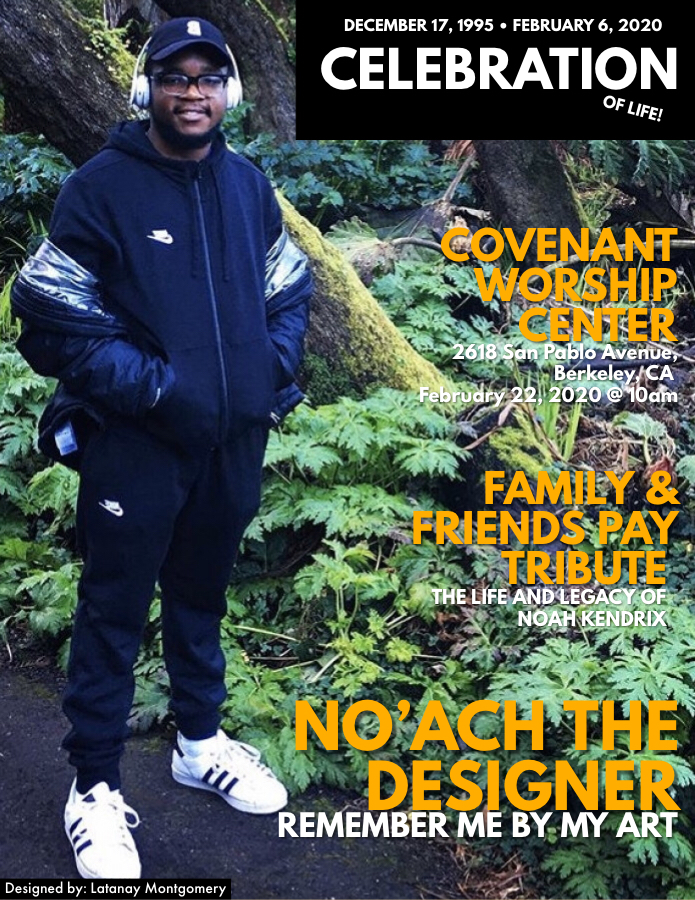 He was baptized and attended Covenant Worship Center in Berkley, where he grew up in the Powerhouse Ministry and performed in the drama ministry.

Kendrix attended Kaiser Elementary School in Oakland. He was a contributing author to a book developed by his fifth-grade class called “Through Our Eyes: Conversations with Kids About Topics That Matter.”  One quote from the young Noah reads: “I don’t know much about death. I know that when people die, you do not see them anymore. I am learning in church that, if I live right and go to church, I will see them again.”

Kendrix attended Oakland Technical High School and was a graduate of the class of 2014. While in high school, Noah was a member of the jazz band, the Junior Varsity Football team and drama club (Oak Tech Rep.) where he performed in two plays; “In the Brown and Red Water,” and “American Night: The Ballad of Juan Jose” where he portrayed the character, Orgun.

While at Tech, he was the recipient of the African American Student Achievement and Excellence Award for three consecutive years.

During summer breaks, Noah interned at the Metropolitan Transportation Commission, working on the San Francisco/Oakland Bay Bridge Project. He also participated as a member of BayPeace, a youth-led alternative organization for social justice activism.

Noah had a dream to go away to college. He received many scholarships and was the recipient of the 2014 Paul E. Smith Scholarship from the Epilepsy Foundation of Northern California for academic performance, community involvement and his exemplary personal statement.

He was well-known among the faculty and students of the Art Department.

Noah was scheduled to graduate this year. Noah enjoyed graphic designing and as ‘No’ach the Designer’ created many brilliant designs.

Noah was preceded in death by his paternal grandmother, Permiller Weathers and paternal uncle Barry Bell.

Gov. Newsom in State of the State Speech Pledges Emergency, Effective Action Against the “Shame” of Homelessness