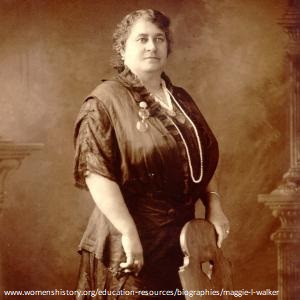 The first American woman of any race to become a bank president was Maggie Walker. Her achievements and successes inspired African Americans to become self-sufficient entrepreneurs. Walker was born Maggie Lena Mitchell in 1867. Her parents, Elizabeth Draper Mitchell, an assistant cook, and William Mitchell, a butler in a mansion owned by abolitionist Elizabeth Van Lew, were former slaves emancipated through the 13th Amendment to the US Constitution. Maggie’s biological father, however, was Eccles Cuthbert, an Irish American who had met Elizabeth on the Van Lew estate.

Following Mitchell’s death, Walker took on a number of jobs to help support her family. By 1883, Walker graduated at the top of her class. That same year, she began working at the Lancaster School, while taking classes in accounting and business. She taught there for three years before accepting a job as a secretary of the Independent Order of St. Luke in Richmond, an African-American fraternal organization that assisted sick and elderly members of the community. As grand matron of the Independent Order, Walker established the Juvenile Branch to help instill a sense of community and confidence in young African Americans. Walker was appointed secretary-treasurer of the organization.

In 1902, Walker published the St. Luke Herald, an African-American newspaper in Richmond. Shortly after, Walker became the first female bank president when she opened St. Luke Penny Savings Bank with the goal of providing loans to members of the community. Walker was a true advocate for the rights of African Americans and women.  In 1912, she helped establish the Richmond Council of Colored Women and was elected president of the organization. With her guidance and leadership, it raised money to support philanthropic endeavors like the Janie Porter Barrett Virginia Industrial School for Colored Girls. In 1920, the bank helped members of the community purchase about 600 houses. In 1924, it was reported that the order had 50,000 members, 1,500 local chapters, and estimated assets of at least $400,000.

During the Great Depression, St. Luke Penny Savings merged with two other banks in Richmond to become The Consolidated Bank and Trust Company. Walker served as chairperson of the board. One of Walker’s many accolades is that the City of Richmond named a street, theatre and high school in her honor.