Math Skills and Black Culture Come Together at CBAC
Advertisement

Like many parents, Pastor James Thomas of the Living Word Community Church, and his wife, Mona, aimed to place their children in a private school with the expectation that they would receive an exceptional education, and have the best chance possible of thriving in college. But once their children were enrolled in a private school, the Thomases were deeply disappointed to see how the Black students were treated.

“We had no idea that in the minds of the folks in the Valley, and in this particular private school that we were involved in, that it was like the ‘60s almost,” Pastor Thomas says. “[There was] a lot of racism [and] a lot of stereotyping.”

Even their own children, who were all excellent students, were not immune to the underlying prejudice. Pastor Thomas got on the board of the school in an attempt to exact change, but found his voice was not being heard.

Eventually, the Thomases concluded that the culture of the private school system was not conducive to the success of Black children, and many Black children were simply tolerating the prejudice for fear that they would get in trouble if they spoke up.

If they wanted to give these children the attention and care they deserved, they would have to take it into their own hands. So, with the help of their church, the Thomases launched their own educational program, which would later become the Culturally Based Algebra Camp (CBAC).

“We started this because we felt like, even though Black folks are moving to the Valley hoping to get a better education, these people are treating us as if we don’t even deserve respect or dignity,” says Mr. Thomas.

When the Thomases first got the idea to start an after-school educational program, it was not actually a math camp at all. It started as a weekly Saturday morning tutoring session for students attending public and charter schools in the San Fernando Valley. The prevailing sentiment among those who attended was that they did not enjoy school, and they especially dreaded math classes.

Realizing that these children needed much more support and encouragement than could be provided in a weekly study group, the Thomases transformed these sessions into an Algebra-focused camp. Now, it runs five days a week, from 8 a.m. to 1 p.m., for six weeks each summer at CHAMPS Charter High School of the Arts in Van Nuys. The camp serves the first through the 12th grades, which are divided into five classrooms. Third graders are the only children who get their own classroom apart from any other grades, and for good reason.

“Usually, Black students, especially Black boys, are excelling in school until they get to grade three,” says Mr. Thomas. “At grade three, they begin to decline. And so, we decided to separate them out and work specifically with them so that wouldn’t happen.”

While the camp’s main objective is to prepare students to do well in Algebra 1 and more advanced math levels, it is anything but a typical summer program. As its name implies, the Culturally Based Algebra Camp prides itself on contextualizing lessons within the historical origins of mathematics and specifically its connection to Africa.

“Our motto is, you’ve got to be able to do math because you invented it,” says Pastor Thomas. “And so, what these students find out is not only did we invent math, but just about everything else. And so, most of what the world celebrates started with us. We show them that.”

In addition to being a pastor, Mr. Thomas is also a professor of Pan-African studies at Cal State LA. He says he repeats many of the same lectures he would give to his college students to the children at CBAC. Each morning, when the first students begin to arrive, he talks to them about a variety of topics including cultural appropriation, HBCUs, Black Greek letter organizations, post-traumatic slave syndrome, reparations, medical apartheid and slave religious customs.

What is important, he says, is that these children are exposed to their culture and history from a young age so that they can feel proud of their heritage and assured of their abilities to excel academically — something many of the campers truly seem to take to heart.

“I’m learning about how Black people have invented many things and knowing that my culture is a pretty smart culture and they have done a lot of things for this world,” says Donovan, a 14-year-old student. “So, it’s nice to know that, and nice to see that I come from a culture with rich history.” 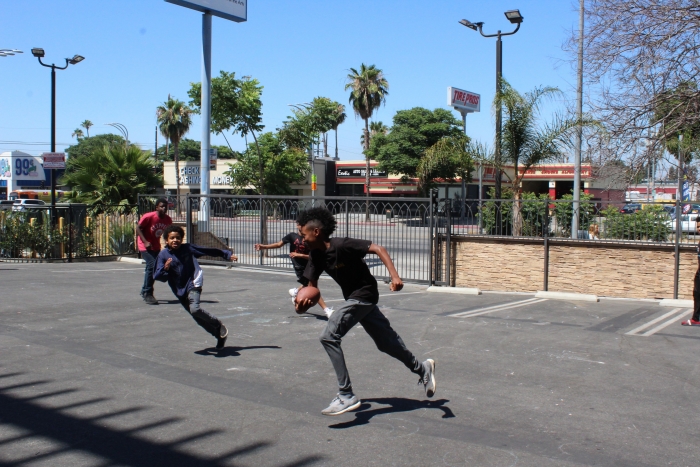 However, the cultural discussions at CBAC are not solely focused on the past. The camp is also a safe space for students to air their thoughts about the current political and racial climate.

“The year that Trayvon Martin was killed, we wanted to know how the kids were feeling about that,” says Mrs. Thomas. “So, there was a whole discussion about that, just so that the kids could have clear perspective and have an opportunity to voice whatever it was that they felt about that.”

The Thomases say the enthusiasm that CBAC students show in dedicating themselves to showing up each day and practicing their math skills is truly stunning. It goes entirely against the stereotype that Black children are uninterested or unskilled in academic performance.

Martha, 16, has been coming to CBAC since she was in fourth grade.

“Before I came to camp, math was not really my friend,” she says. “I didn’t really understand much of what was happening and sometimes my teachers were going too fast or they were not explaining it thoroughly. But then, when I started coming here, and I started learning more, I feel like math is now one of my strongest subjects.”

She is now preparing to take the SAT next year and says she wants to become a pediatric surgeon.

Kruse, a 7-year-old student, likewise had only positive things to say about how the camp has impacted his learning.

“I think it’s pretty good,” he says. “I haven’t learned multiplication or division yet, so I’m starting to get the hang of that and I’m thinking that I can take this stuff over to school and I’ll be probably smarter than other kids.”

Since the camp’s inception, countless parents have praised the program, attesting that their children have not only gained confidence in their math skills but have also developed a greater appreciation and pride for their identity as African Americans.

Shade Mokuolu has two children, a 9-year-old and a 10-year-old, who are returning to the camp for their third year. She appreciates that CBAC keeps their minds busy and engaged during the summer so they will be right on track when they go back to school.

“The moment they came, and they saw other kids like them, they started making friends, [and] they loved it,” Mokuolu says. “It’s also a very unique program because it helps them to connect to their roots [and] their heritage as African Americans. They do a lot of projects here that help them to connect with who they are, they study different parts of the world, [and] they study history.”

While CBAC holds its students to high academic standards, the Thomases espouse the philosophy that “parents are the most important component,” and they are held to equally high requirements in terms of their involvement in their children’s success at the camp and beyond. They must attend workshops and meetings throughout the summer to learn more about CBAC and stay updated on college admission requirements such as standardized testing and the FAFSA. They even take a pledge promising to help their children maintain a positive self-image, resolve issues in the household that may hinder academic achievement, limit unhealthy use of electronics and do everything in their power to help their children flourish.

If there is one thing the Thomases hope to accomplish through this program, it is that their students will never feel as though they have to accept racial intolerance in order to succeed academically – exactly what the Black students at the private school their own children once attended, seemed to feel.

“The one thing that I want them to take away is that when they fight, they win,” says Pastor Thomas. “I say that because I think we’re in a place now that we can’t just take for granted that people are going to do right by us. We have to make demands and we have to push for those demands. I hope that they will fight to go to college, that they will fight to get access to the classes that they need and that will help them to grow.”

To learn more about CBAC, contact Pastor James and Mona Thomas at info4cbac@gmail.com

This article originally appeared in The Los Angeles Sentinel.

Lane College president delivers State of the College address: ‘I count it all joy’