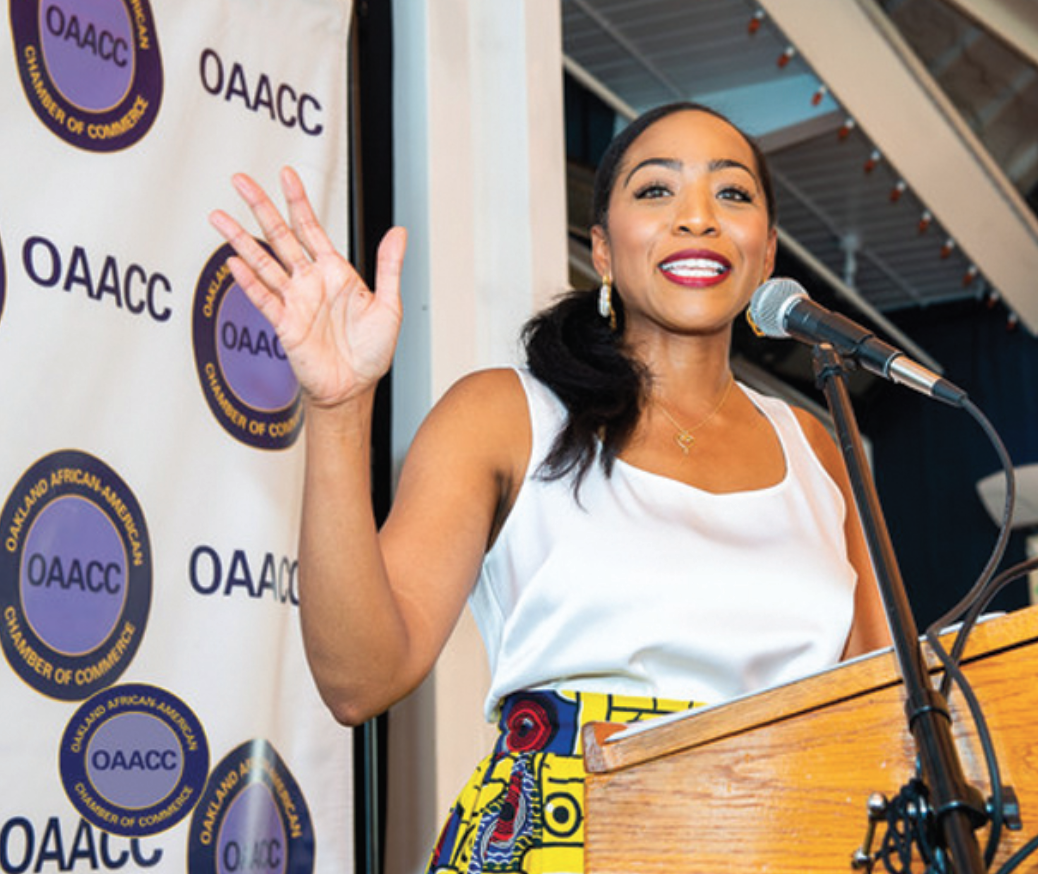 It takes an extraordinary person to pick up the pieces and run for city council of one of the most powerful cities in the state right after losing a home to foreclosure and shutting down a small business.

But that is what today’s high-powered elected official Malia Cohen did when she won two terms (2010 and 2014) in the city of San Francisco before ending as president of the council.

To the packed-to-capacity audience, Cohen spoke of the resilience it took to run for office at that time in her power packed keynote speech at the Oakland African American Chamber of Commerce’s 16th Annual Business Luncheon at Scott’s Seafood Restaurant in Jack London Square.

Currently the California State Board of Equalization Chair, Cohen is the first African American woman to lead in the Department’s 140-year history. In her role, Cohen represents the 2nd district covering 23 counties in California, overseeing 58 county assessors and the state’s $70 billion property tax system that funds public schools and local government services.

“I put everything on the table when running for city council (and started a whole new path).  I knew my enemies during the campaign would use the experience of my losing my home against me,” she said. “And they did.” Yet she persevered.

“I came back with an unwavering understanding of predatory loans and predatory lending. Not only did I lose my home, but that year, 1,400 others in the Bay View Hunter’s Point lost their homes. So when we talk about home ownership and finance, this is incredibly personal.  And when I’m at work and I’m at the table, I’m thinking of you because I drawing upon my personal experience and I know my experience is not unique.”

“As African Americans, we have paid taxes for a long time, with homes as our largest asset. I am reminded of the lack of prosperity that has been historically denied to so many African Americans community members.

So much has been tied up in small business and our homes.”

Cohen urged attendees to play to their best strengths economically and share their stories so that others can learn and grow. She also acknowledged that many smart and savvy entrepreneurs are investing in the Black community and resisting gentrification by providing services, opportunities and mentorship.

While commending the honorees of the luncheon, Cohen urged the audience to draw on the support of community and stay unified and learn from the business owners who launched their business in spite of obstacles or barriers. “We are here to honor the self-motivated and those that block out the negative talk that they are not enough.

Luncheon honorees included Rev. Dr. Charley Hames, Jr., senior pastor of Beebe Memorial Cathedral, who was presented the Chairman’s Award. Hames and his wife, Michelle, have led Beebe Memorial for 13 years. Hames says his faith in God, love of Christ and belief in biblical scripture Ephesians 3:20 are foundational tenets he lives by.

The Small Business of the Year Award was presented to Chris Rachel, owner and operator of Liege Oakland and Slice Oakland. Rachel turned his passion for DJ-ing into businesses that employ more than 30 people.

Start Up Business of the Year award went to Iguehi E. James, owner and chief designer of Love Iguehi. The designer traded in her career in public health and created her clothing line after teaching herself to sew with YouTube tutorials. Iguehi infuses the dynamic designs of her Nigerian heritage and colorful flowing fabrics to produce looks for women to; “Love the way you look. Love the way feel.”

The Oscar Coffey Entrepreneur of the Year Award was presented to Sherri McMullen, founder and CEO of McMullen. For 11 years, McMullen has showcased both established and emerging global designers offering luxury women’s wear. She has styled celebrities including Ayesha Curry.