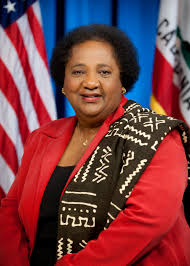 On January 29, former Assemblymember Shirley N. Weber, who represented parts of San Diego and its eastern suburbs in the lower house of the state Legislature for eight years, was sworn in as Secretary of State of California.

In her new role as the state’s top election official, the former chair of the California Black Legislative Caucus replaces Alex Padilla, who Gov. Gavin Newsom appointed to represent California in the U.S. Senate.

“I will be the 1st Black woman to serve in this role and only the 5th Black person to serve as a constitutional officer ever #RepresentationMatters,” Weber tweeted, celebrating her confirmation and the mark she has made on California political history.

Later, she thanked the people of California for placing their confidence in her and promised to fulfill the duties of the role.

“I am humbled to be able to continue to stand up for Californians as Secretary of State,” Weber said. “I thank the governor for his nomination, the state senators and the Assembly members who voted to confirm my appointment, and the Californians who expressed their faith in my ability to assume this critical office. I look forward to lifting up and defending our democratic values of inclusivity and participation in this new role.”

Both houses of the state Legislature unanimously confirmed Weber. On January 28, Senators gave Weber their nod with a 20-0 vote. No Republicans voted.

The day before, her former Assembly colleagues approved her appointment by a 70-0 vote.

“Dr. Weber is a tireless advocate and change agent with unimpeachable integrity,” Newsom said when he appointed her in December.

“The daughter of sharecroppers from Arkansas, Dr. Weber’s father didn’t get to vote until his 30s and her grandfather never got to vote because he died before the Voting Rights Act passed in 1965,” the governor continued. “When her family moved to South Central Los Angeles, she saw as a child her parents rearrange furniture in their living room to serve as a local polling site for multiple elections. Now, she’ll be at the helm of California’s elections as the next Secretary of State – defending and expanding the right to vote.”

“This is a loss for the Assembly, but a huge gain for our state. @ShirleyWeberPHD has been an incredible leader of our house. We will miss her, but I know she will serve as secretary of state with the same strength and leadership she brought as a legislator.”

In the Assembly, Weber authored several high-profile bills that became law, including a measure that created one of the strongest laws against police use of force in the country.

Another set up an eight-member commission to study California’s role in the enslavement of – and discriminatory practices against — Black men, women and children, and the ways the state may be liable for those actions.

No date has been set yet for the special election to replace Weber in the state’s 79th Assembly District. But late last month, Weber’s daughter, Akilah Weber, who is a medical doctor based in San Diego, announced her candidacy to run for the seat her mother just vacated.

What’s Happening in France and Why Should We Care