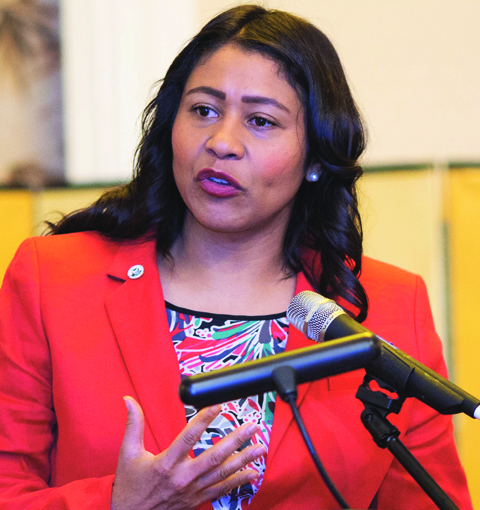 Before Breed unveiled her budget to city officials and some members of the Board of Supervisors, the mayor visited residents living in public housing units in Sunnydale. She said The City had failed on commitments to the Sunnyvale neighborhood:

“We owe it to them to keep our commitments.”

Breed is committing funding for over $187 million to create new affordable housing, preserve existing housing, and prevent evictions. The mayor and Board of Supervisors President plan to place a $600 million bond measure on the November ballot that will help fund to build and rehabilitate affordable housing units.

Additionally, Breed is proposing $2 million in housing subsidies for a two-year pilot program for transgender and non-conforming city residents to prevent eviction, $5 million for prevention and diversion programs to prevent individuals from going homeless, and funding a program to give legal counsel for tenants facing eviction.

“With these commitments we can keep people stable. Keep them housed and prevent homelessness from ever becoming part of their life.”

The mayor is proposing 100 additional behavioral beds for people experiencing mental health and substance abuse disorders and providing the Fire Department with more funding for its EMS-6 crew that handles calls for people with mental health issues.

Dirty streets were also on the mind of the mayor, as she committed $11.9 million to cleaner streets by adding seven new Pit Stop public toilets, 80 new BigBelly trash receptacles, and more street cleaning.

The San Francisco Municipal Transportation Agency plans to get $30.7 million to purchase more new light rail vehicles and to modernize the automatic train control system in the subway in Breed’s budget proposal.

An additional $2.5 million will go towards in support Vision Zero — The City’s goal of zero traffic fatalities by 2024. So far this year, 14 people have died in traffic collisions. Breed said.