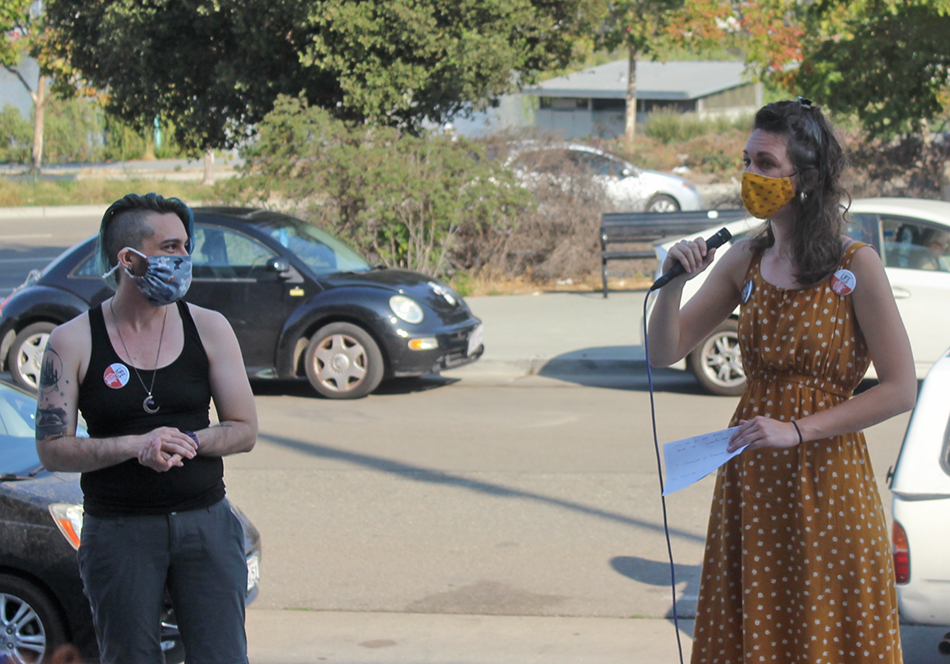 About 175 tenants gathered on the steps of Alameda County’s Superior Courthouse for a rally called Life Over Rent/Nuestrxs Vidas Si Renta No last Saturday.

Jourdan Sales (far left) of JDW Tenants Union speaking to tenants at the Life Over Rent / Nuestrxs Vidas Si Renta No rally in front of the Alameda County Courthouse on September 5. Photo by Zack Haber

The invite also listed three goals: canceling rent during the pandemic, recognition and negotiation from landlords of collectively organized tenants, and prohibiting all evictions and expanding unemployment and food stamps for those hit hardest by the pandemic.

Although the day was hot with temperatures in the upper 80s and 90s, the courthouse provided shade where tenants sat in as they listened to about a dozen speakers representing different local grassroots tenant, labor, and housing justice groups.

A march was planned, but it was canceled as smoke increasingly blew into the area. Tenants held signs, mostly in red, some of which read “EVICTIONS = POLICE VIOLENCE,” “BLACK LIVES MATTER, BLACK TENANTS MATTER,” “HOMES FOR ALL, WE WON’T WAIT” and “LANDLORDS MUST NEGOTIATE.” 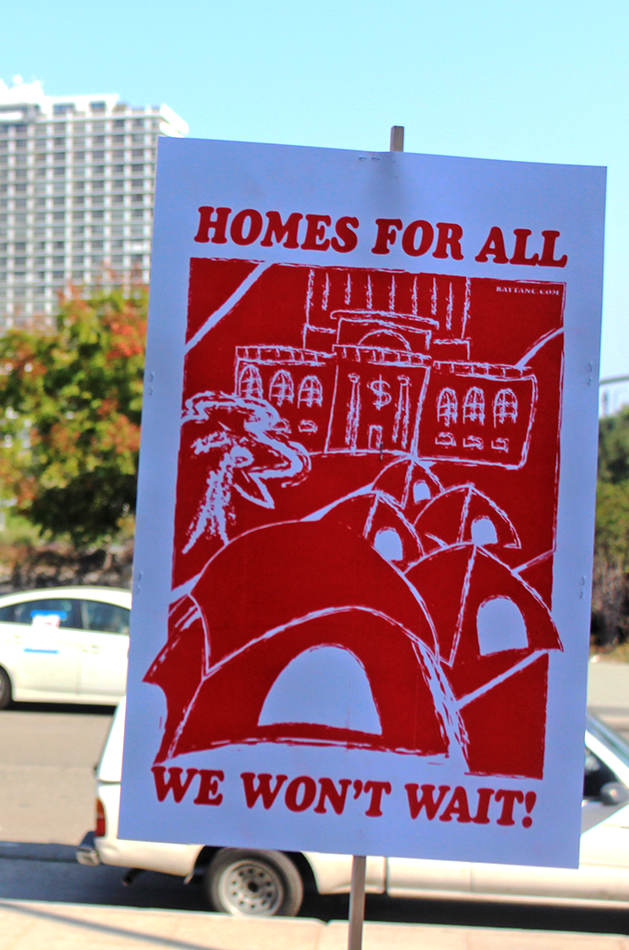 Gerald Smith, a former Black Panther who’s currently a member of the Oscar Grant Organizing Committee spoke first and encouraged people to join in the fight to release people from San Quentin State Prison, where currently 26 people have died from COVID-19. Then Smith spoke of lessons he learned participating in The Harlem Rent Strikes in the mid-1960s and highlighted the importance of organized leadership and planning beyond small wins against landlords. After some landlords abandoned buildings during the Harlem strike, Smith said many renters weren’t organized or prepared on how to respond.

Judy Greenspan, a local teacher and member of the Oakland Education Association spoke next and pointed out that COVID-19 could cause massive privatization of schools in addition to evictions if people do not organize well.

ILWU Local 34 president Keith Shanklin spoke against the Howard Terminal Project, which plans to place an Oakland A’s ballpark and market-rate condos in The Port of Oakland, and said it would destroy union longshoreman jobs.

Members of several local tenants’ unions including JDW Tenants Union, SMC Tenants Council and Alice Street Dunsmuir Tenant Union spoke of the need to connect and organize with other tenants, particularly ones who rent from the same landlord.

Jourdan Sales of JDW Tenants Union said her landlord, Justin Douglas Wallway, found a loophole he tried to use to remove rent control from more than 30 of the households he rented to in 2017. But through tenants organizing and collaborating with Centro Legal De La Raza, they were able to close the loophole.

“We actually changed housing legislation,” they said. “This battle took two years before it was won. This isn’t something that’s going to happen overnight. These things that we want to take time.”

Kieryn Darkwater and Casey Busher of Alice Street Dunsmuir Tenant Union spoke of how they have fought to stop their landlord from charging them for utilities they claim they are not legally obligated to pay. As their fight has been hung up in the Rent Adjustment Program and court, they have expanded and worked with the Ivy Hills Tenant Union.

Their landlord has refused to negotiate with them. Together, both groups have 25 units currently on rent strike. They’ve also started meeting regularly and have a bulletin board in their shared laundry room where they lend out tools and help each other with pet sitting.

“We have become our landlord’s worst nightmare,” said Darkwater.

Dayton Andrews of The United Front Against Displacement spoke of unifying unhoused and housed people together, dismantling distinctions between different struggles including housing, immigration, and queer rights.

“We have to come together as a class to oppose the enemies of the people,” said Andrews.