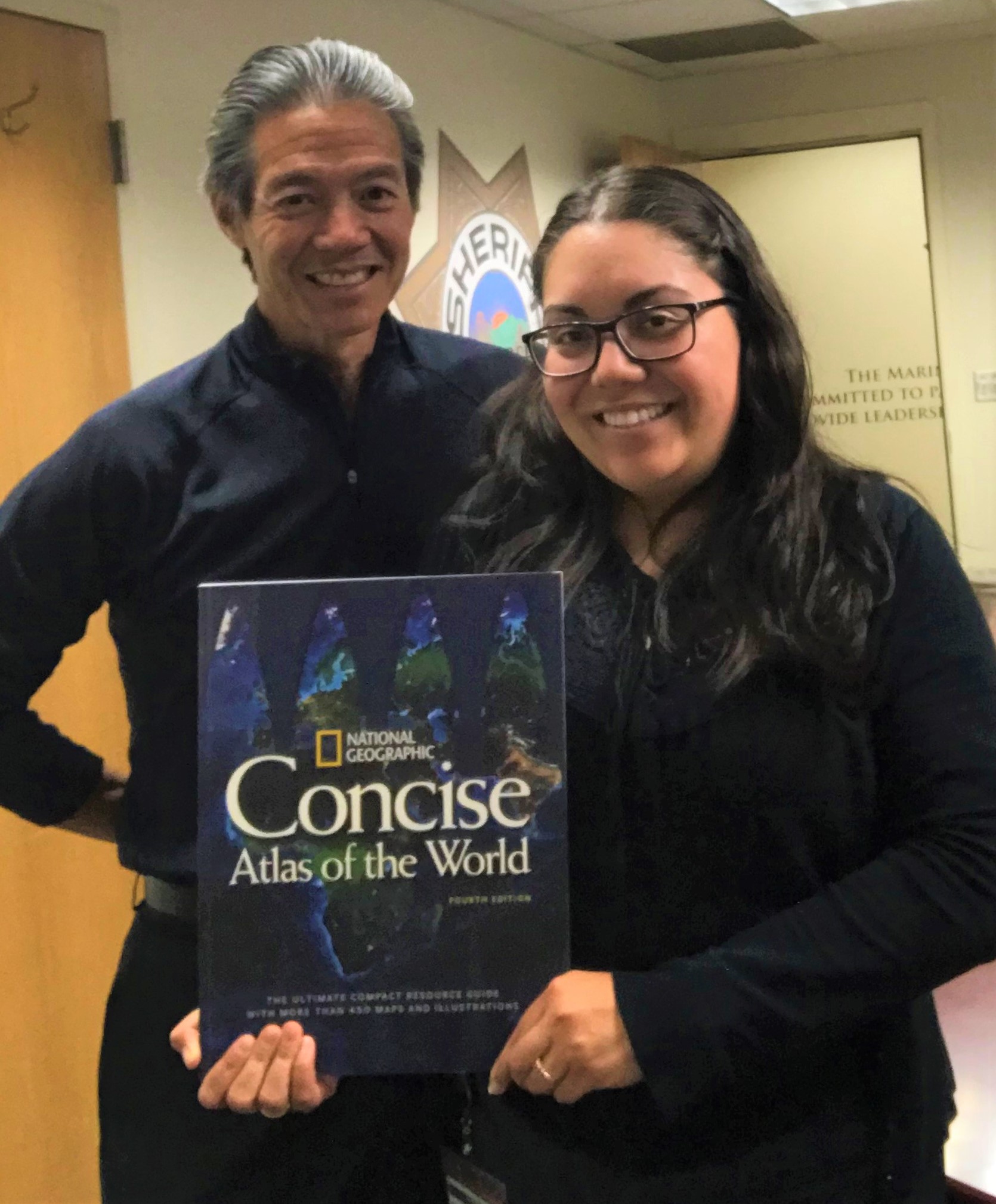 Ideas and collaboration lead to expansion and new catalog

Inmates at the Marin County Jail have had access to a mod­est selection of books for many years. What was missing was a catalog or database to show the incarcerated patrons what else was available if it wasn’t on the shelves.

America Velasco, a program coordinator for the Sheriff’s Custody Division team who was hired in November 2018, was eager to improve the selec­tion of materials and create a catalog for the inmates. There were about 2,000 books and a selection of educational DVDs within the jail. With a few ideas in mind, she first talked with Custody Division Reentry Sgt. Michael Dobbins. With his en­couragement, Velasco walked up to the information desk at the Civic Center library branch one day in January 2019.

“There are inmates in our custody who escape their re­ality by reading books, and I wanted to provide them with books from various genres to choose from,” Velasco said. “It’s important for me to know what type of books we have and how many available cop­ies we have to better assist the inmates, so a catalog was needed.”

Elmer Jan, one of the branch’s librarians, remem­bers the first exchange with Velasco. They both realized it was going to be a tedious and extensive project to catalog each item.

“I expressed an interest in working with America to ex­plore what projects we could address together and so began researching how other pub­lic libraries provide service to county jails,” he said.

“I was surprised by their ex­citement, but I was excited to have Elmer and the rest of his peers on board,” Velasco said.

In May, Jan started visiting the jail on Monday mornings to spend two hours organiz­ing the library materials into genres. He is creating a survey to find out what type of books the inmates would like to read, and Velasco is proactively “weeding” books in poor shape from the jail archive and has initiated a subscription to the Libib cataloging website. MCFL has begun donating new books in direct response to spe­cific inmate requests.

“With the library taking pa­tron requests and our response to those requests with Sara Jones’ support, I feel extremely gratified that we have begun providing library service to an underserved population,” said Jan, who is in his 19th year working for MCFL.

At the jail, Velasco nor­mally oversees educational programs, religious services, community resources presen­tations, training programs and the volunteer program. She evaluates program effective­ness and creates and main­tains the program scheduling in all the housing units. With that much interaction with in­mates, she already knows the library upgrades are being re­ceived well.

“Once we explain to the in­mates that we are creating a library catalog and expanding the selection, they are excited about having access to more books than the ones in their housing unit,” she said.

MCFL Director Sara Jones said the departmental collabo­ration with the Sheriff’s Office represents the County’s com­mitment to equity measures. “It demonstrates how we can tailor services to create access to information and pro­vide reading materials to those who have limited options,” she said. “It’s rewarding whenever we use the skills of library staff to meet our mission for inclu­sion for all people in Marin.”

To learn more about sup­porting the jail library, call (415) 473-3203. The nonprofit Friends of the Marin County Free Library supports many other MCFL programs.

A Juneteenth Festival in Marin City

Felecia Gaston, the director of Performing Stars, has replaced Lenice Smith of Novato as a member of the public on the Independent-Journal editorial board. 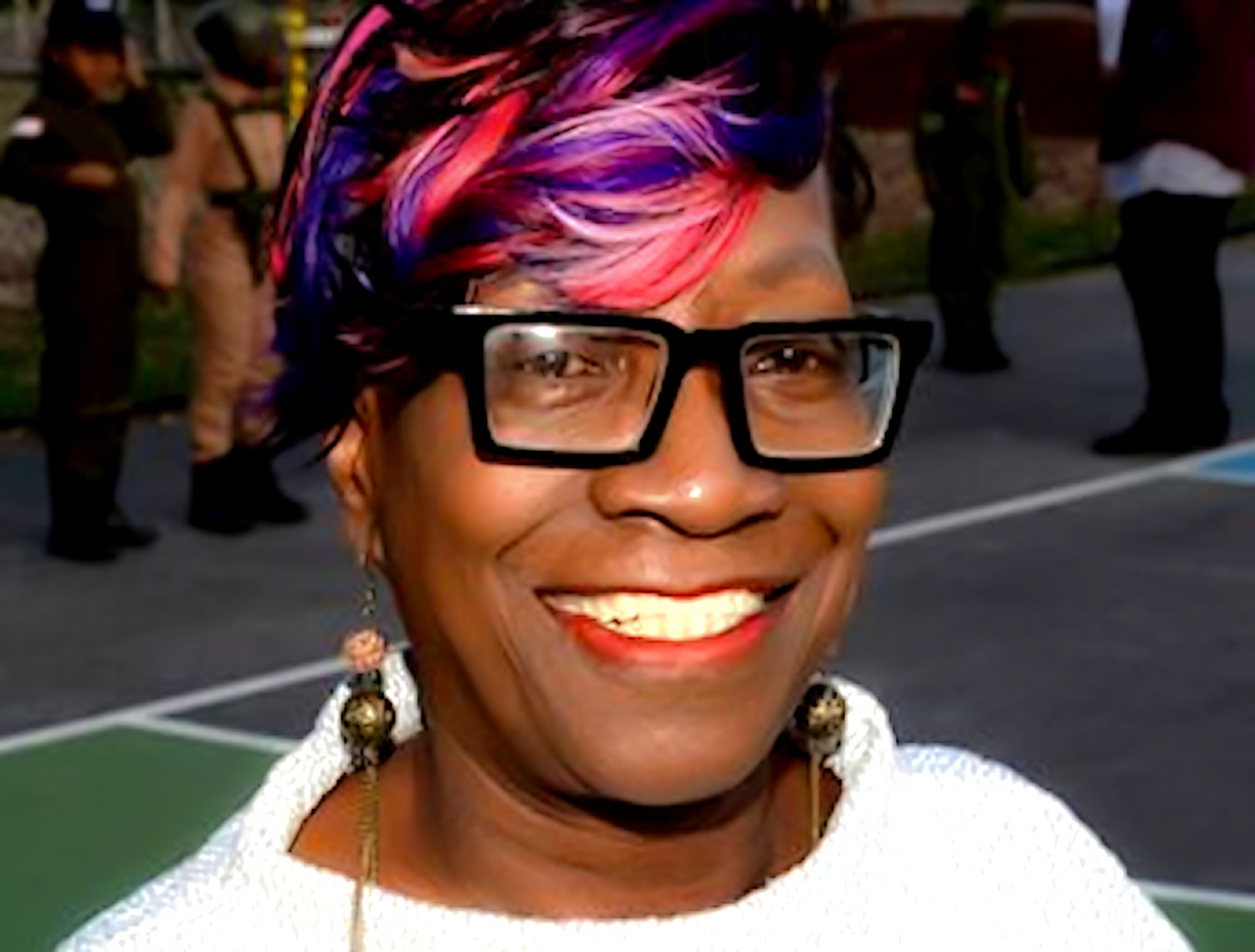 Felecia Gaston, the director of Performing Stars, has replaced Lenice Smith of Novato as a member of the public on the Independent-Journal editorial board.

“I do have a different perspective,” said Gaston who is Black and has been a single parent for more than 25 years and a female business owner. She lives in Marin City with her son Kendrick Gaston-Trevillion.

The Marin Independent-Journal reserves a position on the board for a member of the public.

Willis, along with other Local 10 union officials, acknowledged Davis work as a professor and activist in the 1970s and 1980s and for standing up for freedom and union rights. 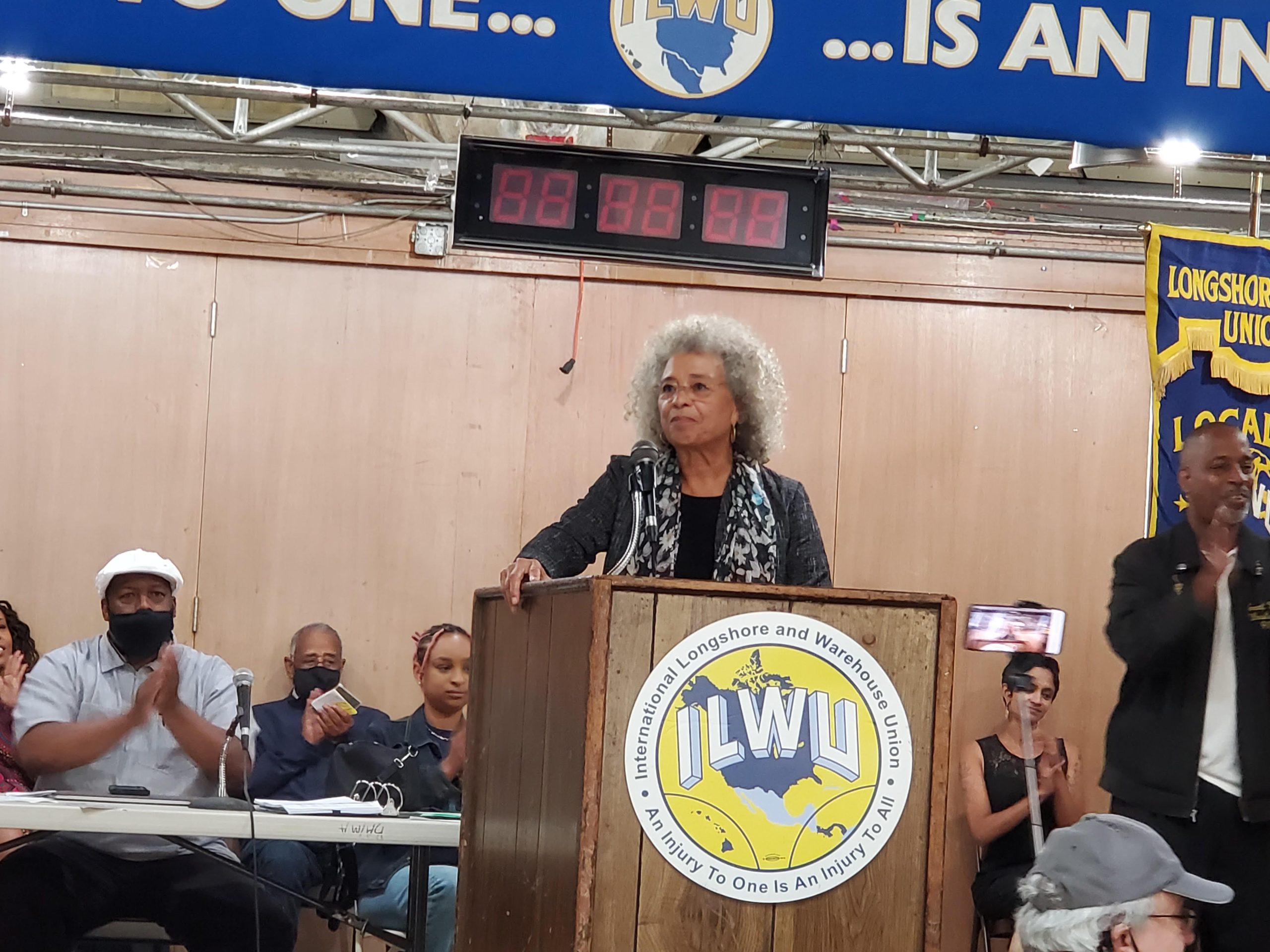 Trent Willis, president of the International Longshore and Warehouse Union, Local 10, promised that his union would honor Angela Davis, the former college professor, feminist leader and former Black Panther leader, the first chance he got.

Last week, Willis lived up to his word, as he along with the ILWU local 10 union, honored Davis in a star-studded ceremony on Juneteenth at the longshoreman’s union hall, which sits alongside Fisherman’s Wharf.

Willis, along with other Local 10 union officials, acknowledged Davis work as a professor and activist in the 1970s and 1980s and for standing up for freedom and union rights.

“In 1972, we had the first rally by organized labor to call for the freedom of Angela Davis,” said Jack Heyman, a retired former ILWU Local 10 member and a long-time Bay Area labor activist.

“We have a long legacy that has been handed down to us, and it’s our responsibility to uphold,” said Willis. “Angela Davis reminds me of Muhammad Ali. She sacrificed everything in defense of her people.”

As a result of this, and her fight for organized labor, Willis and officials with ILWU Local 10, made her an honorary member. This honor has only been given to one other non-union member: Dr. Martin Luther King, who made a member in a 1967 ceremony at the union hall.

Willis was referring to Davis and her ordeal and trial in the 1970s. During the Soledad Brothers trial in 1970, a judge and three Black defendants were shot and killed as they were leaving a Marin County courthouse. The guns used were registered in Davis’ name and hours after the incident, the FBI issued a nationwide warrant for her and she was placed on the FBI’s most-wanted list.

She was later captured in New York and brought back to Marin, where she was held in jail for 16 months before being granted bail. In 1972, she was acquitted of the murder charges by an all-white jury after they deliberated for 13 hours. After her release, Davis would become an international speaker and a college professor at San Francisco State University and UC Santa Cruz.

As she was being honored, Davis acknowledged the significance of Juneteenth and it being made a federal holiday.

“Finally, there is a holiday to celebrate the defeat of slavery,” said Davis, as the crowd cheered.  This wasn’t the first time,Davis spoke in front of ILWU members.  She had been a speaker at the 2020 Juneteenth celebration in Oakland. She also spoke at the ILWU Labor May Day Celebration last month at San Francisco City Hall.

At the Union Hall, close to 300 people showed up to acknowledge Davis’ leadership and to also swear in new registered union members. 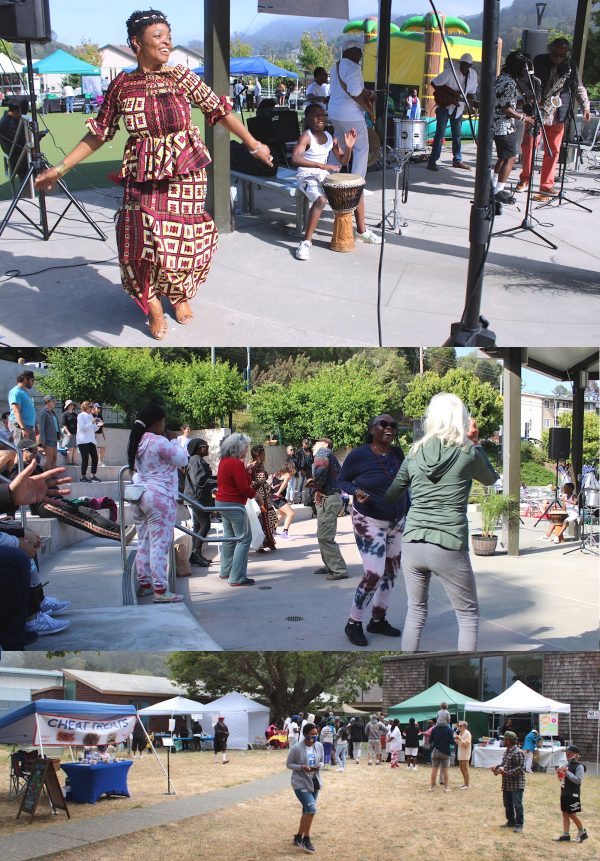 Many people attended Marin City’s 5th Annual Juneteenth Celebration, which was held at the Rocky Graham Park in Marin City on Saturday, June 19, 2021. The theme this year was “It Takes a Village.”

There was much to celebrate at this year’s Juneteenth, which commemorates when Black people enslaved in Galveston, Texas, on June 19, 1865, finally learned that the Civil War had ended and that they were free. This happened two and a half years after President Abraham Lincoln signed the Emancipation Proclamation on Jan. 1, 1863.

This year’s Juneteenth celebration also came after the lockdown caused by the COVID-19 pandemic was lifted and people can now go out and meet each other without the need for masks and social distancing, and President Joe Biden signed a bill on June 17 establishing Juneteenth as a national holiday.

The celebration featured a children’s play area, a food court behind the park, horse rides for children and adults, and vendors selling food, services and art.

Marcus talked about “Roots” in the beginning of the program. The other people who spoke were: Stephania on “The Journey,” Yaya on “The Village,” Trevor on “Self Determination,” R.I.P. Reflections: “Remembering our Fallen Warriors,” and Kiki Latrice on “Keep On Livin.”

Chauntina Thomas performed as a vocalist.

A question was asked during the Celebration, “What does people think about the Juneteenth Festival becoming a Federal Holiday?” Here are a few responses.

Chauntina Thomas, singer and performer, said that she “feels seen” and her Black ethnic identity has been recognized.

Darrell Roary, from the MCCDC, said the Juneteenth festival brings the community together, and it was well overdue to make it a federal holiday. Roary hopes that other cultures will embrace it as not just a ‘Black Thing’ but something  meaningful to all.

Etienne Douglas from the Marin City Library said that holiday is a good thing, but Black History must also be taught. Part of the problem is that Black history is not being taught but instead American history with the difficult parts omitted, such as the1921 Tulsa Race Massacre.

Lisa Bennett, Sausalito activist, wrote “Black folks have celebrated Juneteenth for years and I’m glad that it is now recognized as a federal holiday; it elevates a part of history which is often overlooked.  My fear is that by acknowledging Juneteenth there will be no further advancement toward true liberation, toward true reparations, toward a true acknowledgment of the wisdom and brilliance and contributions of African Americans, that the holiday will be considered enough.  It is not enough.”