KOLA: An Afro Diasporic Remix of the Nutcracker
Advertisement 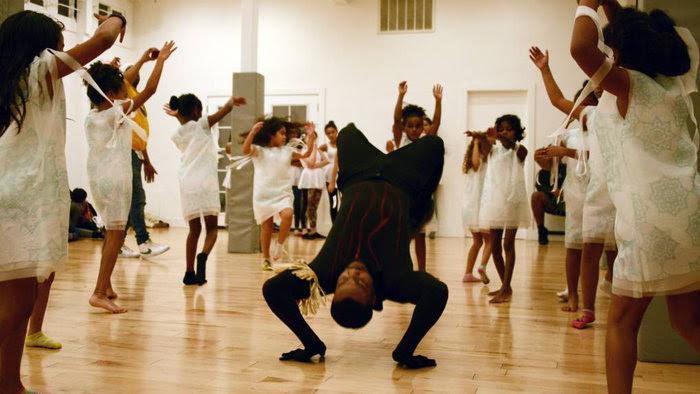 In “KOLA: An Afro Diasporic Remix of the Nutcracker” — we meet Nzingha, an orphan, who lives with her grandparents.  Actor Makeda Booker’s character doesn’t remember her mother and resents her abandonment. Though she knows her grandparents — actors Dame Drummer and Jennifer Jones, love her, the child feels a sense of isolation at the family holiday party and spends time playing games on her phone. While everyone mingles, then dances, Nzingha moves awkwardly when her Uncle Victor (James “Banks” Davis), whom she hasn’t seen in a while asks her to join him. The next day, he seeks his niece out as she does her chores, and shares with her stories of his sister, her mother.

And so begins the journey where Nzingha, guided by Uncle Victor, transformed into Esu (the Orisha of the Crossroads) takes her on a Sankofa journey so she can grasp her historic past to better understand her present.

Set to music by lead composer Kev Choice and others, KOLA is a wonderful opportunity to celebrate African resilience and fortitude. How many orphans like Nzingha were nurtured by adults in the journey across the water? How many were adopted when parents were killed or died or were sold off?

The cast is superb as the lead choreographer Rozz Nash sets work for this gifted ensemble.  The battle between the Raccoon King and Capoeira King, is a highlight as the masked raccoons square off against the Capoiera posse. This dance is followed by the Resurrection where Nzingha meets tiny mythical snow angels, concluding in a grand finale: The Pantheon. End Act 1.

After a brief intermission where many in the audience go out to purchase KOLA bling, T-shirts and other swag, we see Nzingha on the shore where she meets fishermen and fisherwomen.

Crossing bridges made from bones, Nzingah dances through Bahia where she meets Yemanja—goddess of the salt waters, then into Cuba where she meets Oshun, goddess of love, and Ayiti where she dances Yanvolou, for Ogou and the ancestors known as Gede. It is a dance used to reinforce community and solidarity.

As Nzingha grows in self-confidence, she earns her elekes, or ritual beads, after she dances through each divine portal. The next stop is Southern Spain where Nzingha, also named for a warrior, meets Oya, the goddess of change and transformation. This stop is the beginning of the “great (re)turn,” this time accompanied by the deities Mamiwata, Obatala, and Esu.  The child carries her nkisi, or charm, with her. She is wrapped in literal rainbows as she alights in New York at the African Burial Grounds (now Wall Street), dances into Congo Square in New Orleans then heads back to Oakland where the enchantment continues in Oscar Grant Plaza, where Nzingha meets her young grandparents.  Home again, she meets her mother again in the mirror and embraces her as she embraces this episode of her journey, now complete.

Jennifer Johns is a co-writer and composer and also portrays both the grandmother and Mamiwata. Ultimately, it is through African divinity the orphaned Nzingha finds what she believes she lost. Once she steps into the chasm holding Esu’s hand or cane, it is trust that ultimately rewards Nzingha with the answers she seeks. Once she commits to the trip, she doesn’t let go until she reaches home, sweet home.

It is a beautiful story, one of hope and love.  KOLA continues at Castlemont High School, Thursday, Dec. 19-22, 7 p.m. Sunday at 2 p.m.  It is a family friendly production. For tickets visit www.thepeoplesconservatory.org

There is free parking on the side of the school campus by the fence near the childcare center signage. Keep driving all the way to the back.

Residents of Senior Living Facility Fight to Stay in Their Homes