The Smithsonian National Museum of African American History and Culture (NMAAHC) set the stage for a red carpet premiere of Just Mercy and more importantly offered a platform for a powerful conversation.  The film tells the story of Bryan Stevenson’s (Michael B. Jordan) historic fight to get the wrongly convicted Walter McMillan (Jamie Foxx) off death row, which made the NAAMHC a perfect location to converse about {Just Mercy} and the need for criminal justice and prison reform.

On Jan. 11 Stevenson, the lawyer, social justice advocate and author of the book Just Mercy, which inspired the film, sat down at the NAAMHC with historian, professor and filmmaker Dr. Henry Louis “Skip” Gates, for a frank and progressive conversation on injustice within the prison system.

Prior to the discussion, moderated by Gates in the Oprah Winfrey Theater, the AFRO caught up with Stevenson and the Rev. Al Sharpton to discuss the importance of Just Mercy.

“If people saw what I see on a regular basis, they would want things to change,” Stevenson said.

“I’m excited about the film because it’ll bring people into spaces that I’ve seen, but most people haven’t seen.  I hope that it does have an impact. I think it can, and we know that art and narrative has been incredibly influential in many instances and I’m hoping that it’s the same in this issue,” the lawyer, on whom the story is based, said.

Sharpton, who offered the convocation at the official event, shared how he hopes the film will affect audiences.

“I think where the culture shifts, the politics shift. So I think the timeliness of it, the effectiveness of it and what Bryan has done, will be very challenging to the people,” he said. 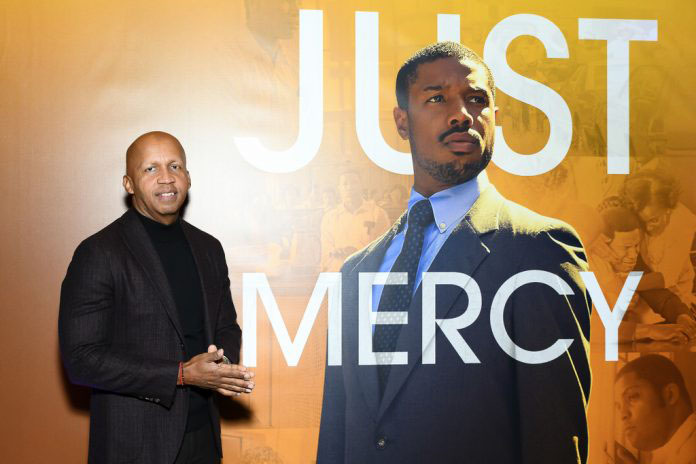 Lawyer and criminal justice and prison reform advocate and author on whom the film was based, Bryan Stevenson in front of the ‘Just Mercy’ poster.

“I hope they get involved.  I hope they will become active in these issues.  Most people don’t know who their prosecutors are.  You’ve got to learn that, to be able to hold people accountable,” he said.

The discussion between Gates and Stevenson was a meeting of the minds, which allowed for tough questions to be answered supported by statistics regarding the status of the criminal justice system, which are disproportionately filled with Black and Brown bodies.

“What we’re doing now is, we’re putting people in jails and prisons where they’re actually being beaten and abused and crushed and isolated in a way, that when they come out, their risk of re-offending is even greater than when they went in,” Stevenson told Gates and the audience in the filled theater.

Stevenson offered a solution to cut down on the high prison population.

“We’ve got hundreds and thousands of people, who are in jails and prisons for drug related offenses, they don’t need a criminal justice response, they need a healthcare response,” Stevenson said. “Addiction and dependency is a health problem, and if we use the healthcare system to respond to that, we could keep people out of jails and prisons, and we could keep families together.”

The lawyer and advocate also discussed how spending could be greatly decreased with a much more health centered approach.

“We went from $6 million in spending in 1980 to about $86 billion in spending last year. If we had $40 billion to invest in communities where kids are experiencing trauma and healthcare for people with addiction and dependency and re-entry services, not only could we improve public safety, but I think we would have a future that is much more secure and much healthier. So I would love to see a wholesale reassessment of people in jails and prisons,” Stevenson said.

This article originally appeared in THE AFRO.

Tamra Simmons discusses producing ‘Surviving R. Kelly’ and what’s next for her