How the Banjo Became Separated From its West African Roots
Advertisement

The modern-day banjo is a string instrument created by Joel Sweeney in the 1800s. To the instrument’s drum, he added a neck with a guitar-like fingerboard and frets, making notes easily played. In 1840, the instrument was introduced in Britain by Joel Walker Sweeney’s group, the American Virginia Minstrels.

In colonial America, the banjo was dubbed “an instrument of the lower classes.”

By 1841, however, Sweeney was already revamping the banjo, transforming it into an instrument for the middle class. Meanwhile, many Black slaves in the antebellum South played the banjo and taught their masters how to do so as well..

Until the 19th century, the banjo (or banjar) was identified exclusively with Black people, and musicologists have long looked in West Africa for its predecessors. Much of the speculation has centered on two hide-covered stringed instruments from West Africa that bear some resemblance to the banjo: the ngoni and the xalam.

These instruments are typically played by griots, or praise singers, who enjoy special status in many West African tribes. They are just two of more than 60 similar plucked stringed instruments found in the region. 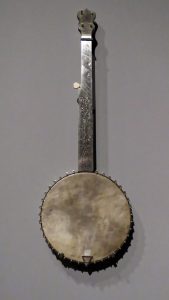 Despite its origins, the banjo was later appropriated from slave culture and spread into the greater American popular culture through minstrel shows and blackface performances.  Incorporating various regional playing styles — from the rhythmic role the banjo played in traditional New Orleans jazz to the fingerpicking sound of bluegrass — white performers have claimed the instrument as their own.

The Banjo was “later passed off to curious white folk …” musician Jayme Stone said during a National Public Radio interview. “Although a few people play some of the crossover styles that happened early on in the New World, [it] didn’t seem like there was much knowledge of the music that it came from.”

Stone admits that it is difficult to describe the banjo and how it was originally conceived. “It’s hard to say exactly what it was … it was the blueprint of the banjo that traveled over in [African] musicians’ minds, and then they built a similar thing with what they had here: dried-out gourds, goat skin, whatever they could find … it became an African instrument that went through the Industrial Revolution.”

The banjo today has frets and employs a short droning string, but in Africa, these early predecessors sometimes used only one string and as many as 21. The instrument’s versatility, flexibility and its African ancestors beckon many to the instrument.

The 2011 Grammy-winning Carolina Chocolate Drops have spent years revitalizing and refreshing the tradition of African-American string-band music. Its members learned much of their repertoire from the eminent African-American ,old-time fiddler Joe Thompson.

Drops performer Rhiannon Giddens wrote: “Know thy history. Let it horrify you; let it inspire you…” The revival of the banjar is a reality; a part of African-American musical history.