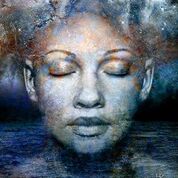 David Bruce Graves’ work gives the viewer a lot of room to think.

“Heaven and Earth,” the title piece in the window of the Joyce Gordon Gallery in downtown Oakland features a Black woman’s face. Her eyes are closed, her countenance serene, lights shine in her hair. Her bare shoulders glimmer beneath what appears to be a watery surface.

Now in his mid-60s, Graves has traversed a career that includes commercial and fine art with an imagination and skill in multi-media that seems to know no bounds.

Born in Pittsburgh, Pa., yet raised in Oakland, Graves has been drawing and making art all of his life. His career began in the commercial art field when he graduated from the Academy of Art at the University of San Francisco before heading for New York City, where he lived and worked for many years, returning to the Bay Area in 2012.

Graves credits his success to his relationship with his dear “Aunt Ann Tanksley who was and is a fabulous artist and her husband, John, [who] was one of the best photo re-touchers in New York City,” Graves said. “When my family would visit their home in New York as a child, I was enchanted by their world and how they were so successful at it. Aunt Ann inspired and mentored me as she still does.”

Once he moved to New York, John Tanksley mentored him. “The many hours I spent looking over his shoulder as he retouched and manipulated photos for major advertising agencies had a big influence and closely relates to the technique I’m currently working in.”

Graves is shy about talking about his work, but visual art is the kind of medium where silence is often justified. In Graves work, the viewer wants to just live in the painting, and project what a subject might be thinking.

One example is “The Griot’s Wife,” where we see a man with a bag and his musical instrument, the kora, preparing for a storytelling journey. His wife walks with him, yet her eyes speak volumes as she appears to contemplate her husband’s impending departure.

Graves uses a mixture of digital and traditional techniques and his compositions allow histories or multiple narratives to exist simultaneously. The works are not stagnant, but invite us into the medium to share our perspectives.  We are in the now and then, joined at the horizon or along the edges where, as in African mythology, two calabashes meet, Damballah or the sacred snake holding the two hemispheres of the universe together.

Each of the 31 pieces deserves its own audience. Besides the art in the window, “Heaven and Earth,” there is “Bush,” featuring a woman with an Angela Davis-size Afro hairstyle crossed with Eve and Adam’s abode … or maybe it’s the countryside just outside of Accra – a place untamed, natural, pure. This “bush” is a world atop a woman’s head. Butterflies and hummingbirds like her energy, too – symbolic images that populate many of Graves’ landscapes.

Like an artistic DNA, the motifs allow the viewer to trace artistic creations through the large gallery from wall to window, across multiple canvases.

There are images of warriors standing unafraid with wild animals as others show subjects dissolving, turning swiftly, spinning into funnels. One painting of liberated women stepping from the plantation into commerce and prosperity indicates Graves’ fascination with the period after slavery when Africans could join this American society as participants economically and politically.

So, we see these women dressed for success challenging prejudicial and racist ideas of worthiness or equality.

In fact, the majority of the subjects are Black women with emancipated, take-charge personas, free from white pathology. It is no wonder his work flies from the walls wherever he exhibits.

You’ll Be Fined For Going Without Health Insurance This Year