During the Women’s Suffrage Centennial, Harriet Tubman and other African Americans acknowledged for their contribution to the struggle for all women’s right to vote.

WASHINGTON, DC – Highlighting Black History as well as Women’s History, the Church of Scientology National Affairs Office held its eighth annual Black History Month event honoring the lesser-told, but important, influence of Harriet Tubman and other African Americans on the Women’s Suffrage movement and the eventual passage of the 19th Amendment to the Constitution in 1920 granting women the right to vote.

Opening the event was an appearance by an “elderly Harriet Tubman” portrayed by Ms. P.S. Perkins. The Tubman actor explained how she fought for women’s suffrage after the Civil War and how she sometimes had conflicts with other advocates who worried that the African American female vote might hurt the suffrage movement.

Ms. Tubman emphatically argued that ALL women should have the right to vote! At the end of the event, she passed out replicas of the proposed Harriet Tubman $20 bill to the guests including distinguished members of Washington’s diplomatic corps from the Caribbean and Africa, Ghana Tourism USA, Miss Africa USA, leaders in the arts, human rights activists and authors.

Ms. Tina Wyatt, great-great-great grandniece of Harriet Tubman, spoke about the important history of Tubman’s involvement, as well as what is being done this year to commemorate her role during this 100th Anniversary of women’s suffrage. 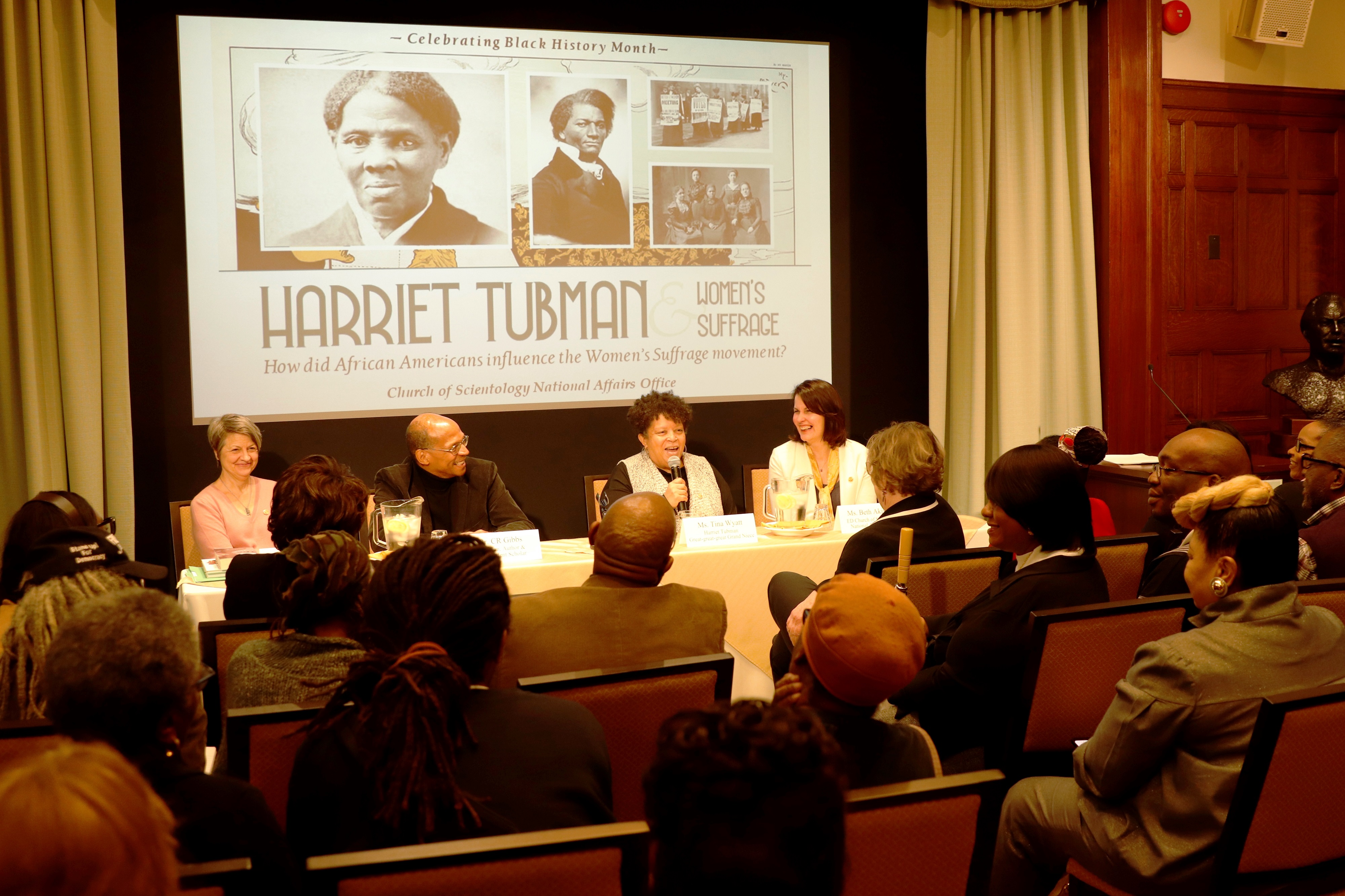 Ms. Tina Wyatt, great-great-great grandniece of Harriet Tubman, spoke about the important history of Tubman’s involvement, as well as what is being done this year to commemorate her role during this 100th Anniversary of women’s suffrage.

Although Harriet Tubman lived to be 91, she did not see the 19th Amendment pass. However, Ms. Wyatt explained, Tubman’s influence on the suffrage movement was such that it was recognized this year in no less than the Rose Bowl Parade on New Year’s Day.

Joining other descendants of famous suffragists, Ms. Wyatt rode on the Women’s Suffrage float, which won the Best Theme award this year.

Walking behind the float were 100 women dressed in white commemorating the brave women who marched in the suffrage movement.

Joining Wyatt on the float were descendants of other fighters for suffrage including descendants of Frederick Douglass and Ida B. Wells who fought for women’s suffrage to ensure that all women would gain the right to vote.

Historian and scholar Dr. C.R. Gibbs detailed not only the influence of famous African Americans like Frederick Douglass in achieving the important milestone of women’s suffrage, but also the civil rights fight that then ensued for decades to obtain it for real.

Full voting rights were not fully realized until the victory of the Voting Act of 1965 which legally removed barriers to voting that effectively barred African Americans and women from voting despite the Constitutional Amendments intended to guarantee that right.

The Commission’s role is to commemorate and coordinate the nationwide celebration of the 100th anniversary of the 19th Amendment and to educate the American people about the efforts and undertakings of the women’s suffrage movement in the United States in a nonpartisan fashion.

The 19th Amendment was fully ratified and announced on August 26, 1920.Today, over 68 million women vote in the U.S.

Moderator of the panel, Ms. Beth Akiyama, Executive Director of the Church of Scientology National Affairs Office remarked, “In this election year, some still argue that there is still a long way to go to remove barriers to voting rights for all and so the fight continues.”

“And what about voting rights in the rest of the world?

There are still countries that do not have fair and free elections and voting rights for all,” said Ms. Akiyama, reminding attendees of a tool that can be used to achieve this worldwide: The United Nations Universal Declaration of Human Rights (UDHR).To make the 30 rights in this key UN document a reality, Youth for Human Rights International created videos which include all 30 rights, including Human Right #1, We are All Born Free and Equal, as well as Human Right #24, The Right to Democracy.

These were given out at the event and are also available to anyone for free worldwide at: www.youthforhumanrights.org.

OP-ED: Housing is the Next Step to Mitigating Coronavirus