GirlTrek is Changing the Health of Black Women Through Walking
Advertisement 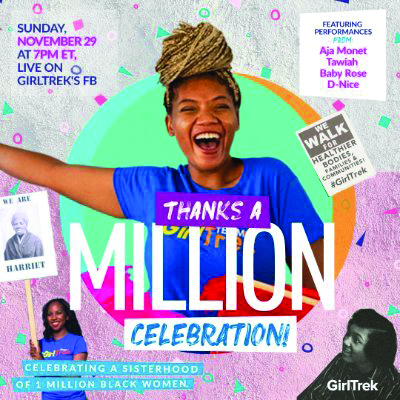 I was first introduced to GirlTrek when founders Vanessa Garrison and T. Morgan Dixon hosted a live conversation with poet Nikki Giovanni and civil rights activist Angela Davis on FaceBook.

It was extraordinary to say the least.

Garrison and Dixon met in college and are now visiting professors in Harvard Kennedy School on Social Innovation at Harvard University.

Founded in 2010, the premise of the organization is simple: they are a health organization for Black women and girls in the United States. With their motto — ‘Take a Walk, Join a Movement’ – Garrison and Dixon encourage health through walking as the first step.

Per their website, GirlTrek.org:  “Walking is the single most powerful thing a woman can do for her health,” according to Dr. Michael Evans.  Heart disease is reduced by 50%; diabetes by 58%; dementia by 50%; anxiety by 48%; and depression by 47%.

They have reached their initial goal of having 1 million women walking and now are upping it to 2 million.

GirlTrek celebrated their millionth walker by having a block party on Facebook Live with D-Nice spinning and performances by India.Arie, Baby Rose, poet Aja Monet and Tawiah.

Girltrek participants can walk anywhere, indoors/outdoors, solo or in their neighborhoods, or in groups, socially distanced.  There are GirlTrek chapters all over the U.S., including one in Oakland.

According to their web site, membership clearly has its benefits.

In 2019, 26% of GirlTrek members reported taking fewer medications; 61% had lost weight, 40% reported improvements from a previous health condition, and 98% of those diagnosed with depression reported that walking improved their symptoms.

And like almost anything involving Black women these days, GirlTrek is a movement, too, with a focus on education and voting.

(Hamer was known for speaking on nationwide television when white Democrats had excluded Blacks from representation at the 1964 Democratic Convention. Chisholm was the first Black woman elected to Congress and Clark, an educator, who helped develop literacy programs instrumental in the enfranchisement of Black people in the South.)

Another component of GirlTrek is #Black Girl Justice League, a voter mobilization effort to get out the vote.  The U.S. general election is over, the inauguration is set for Jan. 20, 2021, but there is an important election in Georgia on Jan. 5, 2021.

The Georgia senatorial run-off election has Democrats Jon Ossoff and Rev. Raphael Warnock vying to unseat the Republican incumbents, which would allow Democrats to gain control of the U.S. Senate.

GirlTrek offers merchandise on their site, including masks, T-shirts, hoodies, and more:  For more information go to GirlTrek.org and you can sign up there, too.