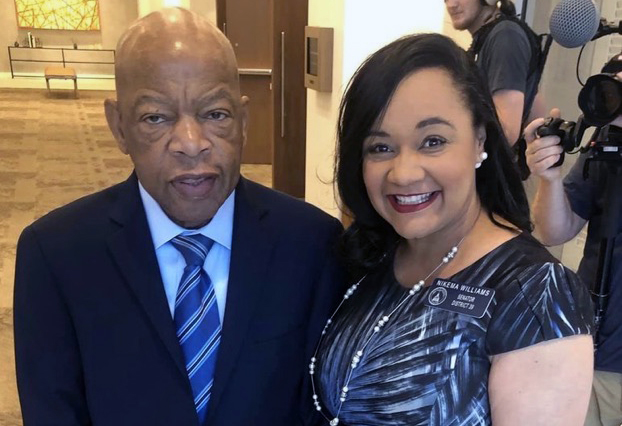 Williams tweeted:  “Nobody will ever fill the shoes of Congressman John Lewis.  I will do everything in my power to honor his legacy and lift up his spirit.  I’m honored to accept this nomination.”

Nobody will ever fill the shoes of Congressman John Lewis.

I will do everything in my power to honor his legacy and lift up his spirit.

The first woman chair of  Georgia Democratic Party, Williams is also the deputy political director of the National Domestic Workers Alliance, which organizes domestic workers in the United States.

Lewis’ leadership and fighting spirit are needed now more than ever in this country, Williams said. “I believe it is imperative that we choose someone with a long track record of fearlessly standing up for what is right and someone who will take on the endless attacks on our rights that we’ve grown accustomed to seeing from the Republican Party.”

Williams was born in Georgia, spent time in Alabama and graduated from Talladega College, an HBCU in Alabama.  She is a member of AKA.

Williams is married to Leslie Small, a former aide to Lewis. They have one child, a son.

Williams is expected to easily win the election.  She will face Angela Stanton-King, the Republican nominee who, after spending two years in prison for conspiracy, was pardoned by Pres. Donald Trump.

Stanton-King has also appeared on the TV reality show, “The Real Housewives of Atlanta.”

Georgia Republican Gov. Brian Kemp will announce and decide the timing of a special election to fill Lewis’ vacant seat until the winner of the November election is sworn in January 2021.

Trump Threatens to Send Federal Law Enforcement to Oakland, Other Cities Amid Outrage Over Portland