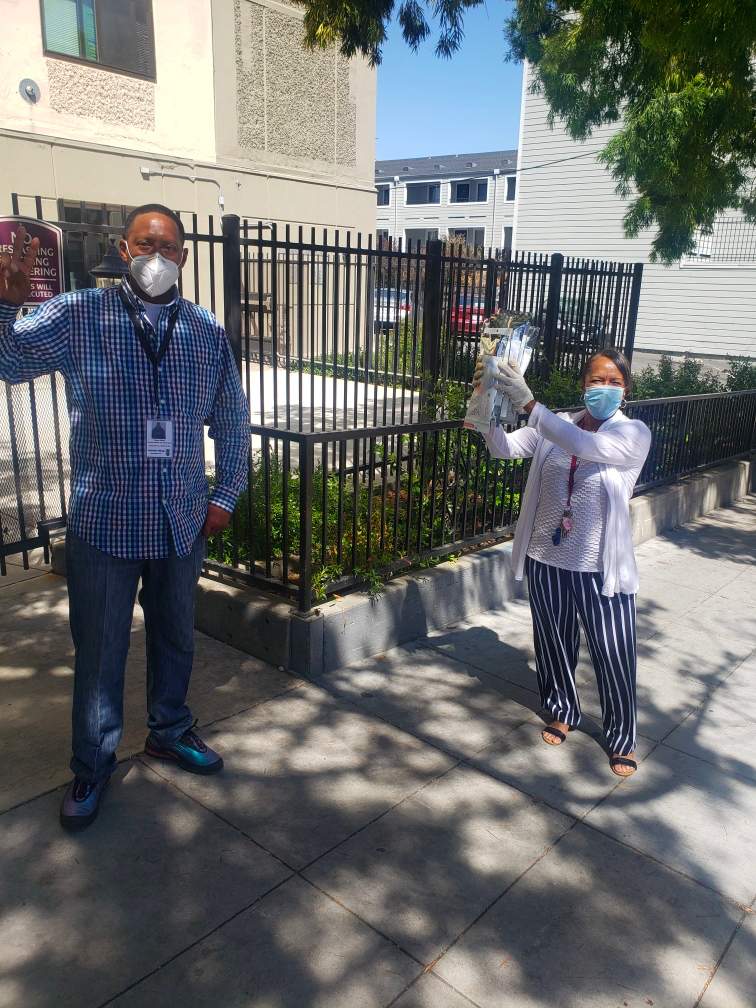 On March 26, 2020, Daryle Allums, CEO of Adamika Village a nonprofit known for decreasing gun violence, protecting women from domestic violence and human trafficking went to the office of doctor Geoffrey Watson for his monthly visit. Allums called the “Da Mayor of East Oakland,” has suffered from Lupus for seven years.

When Allums entered Dr. Watson’s office he noticed that half the staff had PPE but none of the patients were masked.

“I asked Dr. Watson why people didn’t have masks,” said Allums. “But I immediately knew why. It’s because people have low priority while hospitals have top priority.”

“Dr. Watson explained he wasn’t getting any PPE because everything was on backorder.  This is crazy, I could get COVID and die and this ain’t cool. Then I started getting calls from other nonprofits like East Oakland Collective, BOSS’s outreach team, and Men of Influence, who were on the streets doing “the work” complaining they didn’t have PPE.”

Allums, who has Hazardous Material (HazMat) certification, knew better. “If you’re a front liner, the government is supposed to supply protective equipment once a week, no problem, ’cause they have lots of money,” said Allums.

Allums called Dr. Watson and expressed his desire to bring together a group of doctors to help people in the community get PPE and more importantly, get tested.  Additionally, Allums wanted protection for nonprofit staff members doing work in the streets.  “I knew in order for the Black community to survive we would have to unite, and we needed frontline healers,” he said.

Together, Allums Watson and nonprofits pulled doctors together.  Then, John Jones of Just Cities introduced Allums to the Black Cultural Zone (BCZ), and the circle was complete as Carolyn Johnson, CEO of  BCZ introduced him to Black businesses in need of PPE.

“I could relate to what Carolyn was doing as I had won Soul Beat’s Black and Gold Entrepreneur award in 2002 as the first Black to have a food truck ‘D and D Soul Meals on wheels.’  I realized our community was about to take a hit physically and economically, and the only way we’d survive was to come together,” said Allums.

“Nonprofits were all fighting for the same money.  Why fight for the crumbs?  If we come together we could build our own businesses and become our own distributors.  I started calling all the nonprofits and doctors, Black businesses and even white folks. Now, we all work together because it’s our lives we’re fighting for,” said Allums.

Approximately four weeks after its inception, the City of Oakland is giving Dr. Watson 1,000 units of PPE every two weeks.   In addition, Oakland Front Line Healers are distributing PPE, have set up food distribution points throughout East and West Oakland, and has begun COVID-19 testing at Watson’s office at 5709 Market St. in North Oakland and the Roots Community Health Center at 9925 International Blvd.