Evelyn Preer: In a Hollywood Separate But Unequal
Advertisement

Sissieretta Jones: Not Without Roadblocks - Learning Black History Year Round 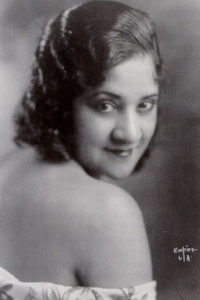 As Blacks in America suffered overt racism, life under Jim Crow and forms of open racial violence, Hollywood flourished. It was everyday business to depict Blacks as servants, rapists, illiterate beings, or slaves onscreen. The cruder the Black character, the more white audiences loved them.

It wasn’t until the 1930s that Black actors could find parts, but they were generally song-and-dance roles. In fact, when Hattie McDaniel Hollywood was up for her Academy Award (“Gone With the Wind” 1940) she was forced to sit at a different table from her white co-stars. The Academy had chosen a venue that didn’t allow Blacks.

But before McDaniel, there was Evelyn Preer (1896–1932). Had she not died prematurely, she might have been the Black “crossover” leading lady on Broadway and in Hollywood. Despite Hollywood’s racial climate and its own prejudices regarding Black actors, Preer’s lighter skin allowed her to emerge as a pioneer in race films and dramatic theater.

Born in Vicksburg, Miss., Preer was lauded as “the race’s most famous and most versatile actress.” She was often at the center of the most provocative investigations of Black stereotypes on the big screen. Preer attained starring roles in several Oscar Micheaux films, which catapulted her to becoming his most beloved star.

About Preer, Micheaux once said: “Miss Preer could play any role assigned her and always did so cheerfully and without argument.”

Young Preer begged her mother to allow her to pursue acting. After much persuading, she agreed to allow Preer to take on a role in “The Homesteader” (1919), Micheaux’s first film. Preer was so impressive that Micheaux immediately cast her in more of his work.

This included the role of Sylvia Landry in “Within Our Gates” (1920), a scathing commentary on race relations.

The character, Landry, was a woman who survives an attempted assault by a white man who is actually her biological father. Despite the controversy and challenges, Preer mastered the role.

Preer was also a talented singer and stage actress. Her role in the 1926 Broadway production of “Lulu Belle” received rave reviews from critics. In 1927, she appeared in the musical comedy “Rang Tang” and recorded with Duke Ellington. She later performed with blues singer Ethel Waters.

Lending to Preer’s success was her grooming in the Black acting troupe The Lafayette Players. As a part of the troupe, she performed in Somerset Maugham’s “Rain” (1927) and Oscar Wilde’s “Salome” (1923). These works had never been produced and acted by all-Black performance companies. It was also there that she met her husband, actor Edward Thompson.

Preer and Thompson quickly became a leading duo. white Hollywood wanted the pair for several film roles. Sadly, the couple, because of their lighter complexion, was forced to paint their faces Black to play African-American roles.

After much success, Paul Robeson described Preer as the “most accomplished dramatic actress that our race has ever produced.”

In 1932, Preer became pregnant. Only months after her daughter was born, she died from double pneumonia.