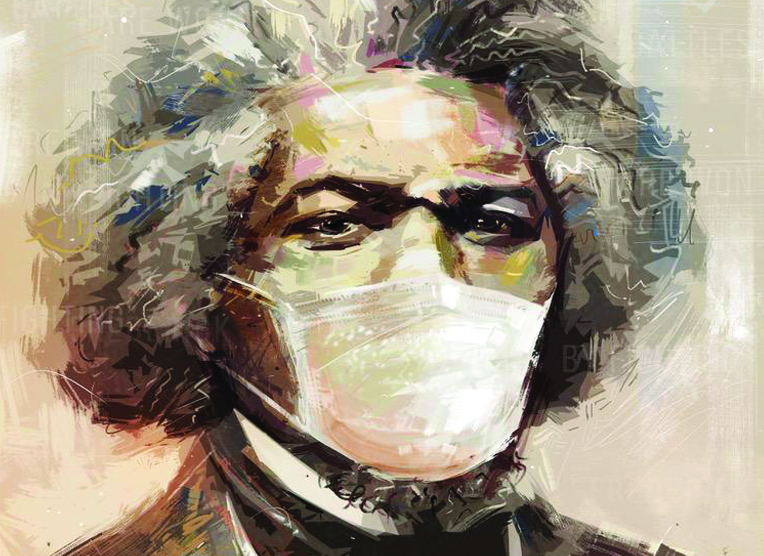 “Disease is cured by the right use of remedies,” Douglass’ quote beneath the image reads.
According to Kenneth B. Morris Jr., the co-founder and president of FDFI, the image is more than a fun image depicting a Black icon in a contemporary setting. To the FDFI, it is a powerful image about Black people’s position in America and the lurking threat of the coronavirus crisis. 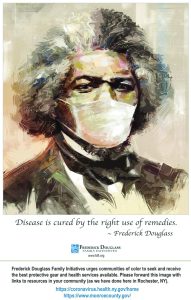 FDFI commissioned social justice artist Nikkolas Smith, the artist who worked on the Frederick Douglas artwork, has designed posters and other artwork for companies like BET, Disney, Sony Pictures, Marvel Studios and many others.
He emphasized the impact of this piece in relation to the racial divide in infections during this pandemic.

“The image – perhaps seen as cute, clever or even amusing – a simple juxtaposition of a historical figure and a contemporary challenge,” wrote Morris, who lives in Orange County, in a letter.

“While the message is open to interpretation,” he added. “FDFI looks at this very differently. The image and message are about how communities of color are affected and treated unequally, not surprisingly but predictably, during this pandemic.”
FDFI will allow organizations to use the image free-of-charge to raise awareness about COVID-19.

Despite being about 13% of the total United States population, nearly 20% of confirmed COVID-19 related deaths have been African Americans, according to the Centers for Disease Control and Prevention (CDC).

Morris directly addressed his personal connection to this pandemic in a YouTube video posted April 14 addressed to FDFI supporters.

“Our daughter Nicole contracted COVID-19 several weeks ago. We’re thankful that she has recovered, and we feel more compassionate than ever about helping those going through similar experiences,” Morris said.

Morris himself is a descendant of both Frederick Douglass and Booker T. Washington and FDFI serves to further some of the ideals of both of those famous Americans.
Founded by Morris, his mother Nettie Washington Douglass and Robert J. Benz, the FDFI focuses on education as a means to combat human trafficking, one form of modern-day slavery.

“When we work with students,” Douglass said on the FDFI website, “We can accomplish several things at once: provide an interesting narrative about an important period in our history that is often overlooked; inspire modern abolitionists; provide timely information that may prevent young people themselves from becoming victims and help create better world citizens.”

Morris spoke about how important this image is in the scope of Black struggles during a crisis.

“FDFI commissioned social justice artist Nikkolas Smith to create a COVID-19 portrait of Frederick Douglass to protest racial discrimination,” Morris said. “We will disseminate this image all over the country and draw attention to health disparities in Black and Brown communities. During this health and financial crisis, these disparities will become increasingly exposed.”

While Morris says that art is up for interpretation, he looks at this image with the lens of one who has witnessed a long history of oppression and inequality.

Smith, the artist who worked on this piece, has designed posters and other artwork for companies like BET, Disney, Sony Pictures, Marvel Studios and many others.

He emphasized the impact of this piece in relation to the racial divide in infections during this pandemic.

“I was honored to take on this project. I really felt the weight of it,” Smith said. “This art piece is really a piece that symbolizes the combination of one very current and topical struggle joined with this ongoing struggle with racial justice that we are still fighting today.”

As for what Morris hopes this image will accomplish, he said, “I pray that Nikkolas Smith’s artwork inspires and motivates our people to heed my great ancestor’s call to ‘agitate, agitate, agitate.’”