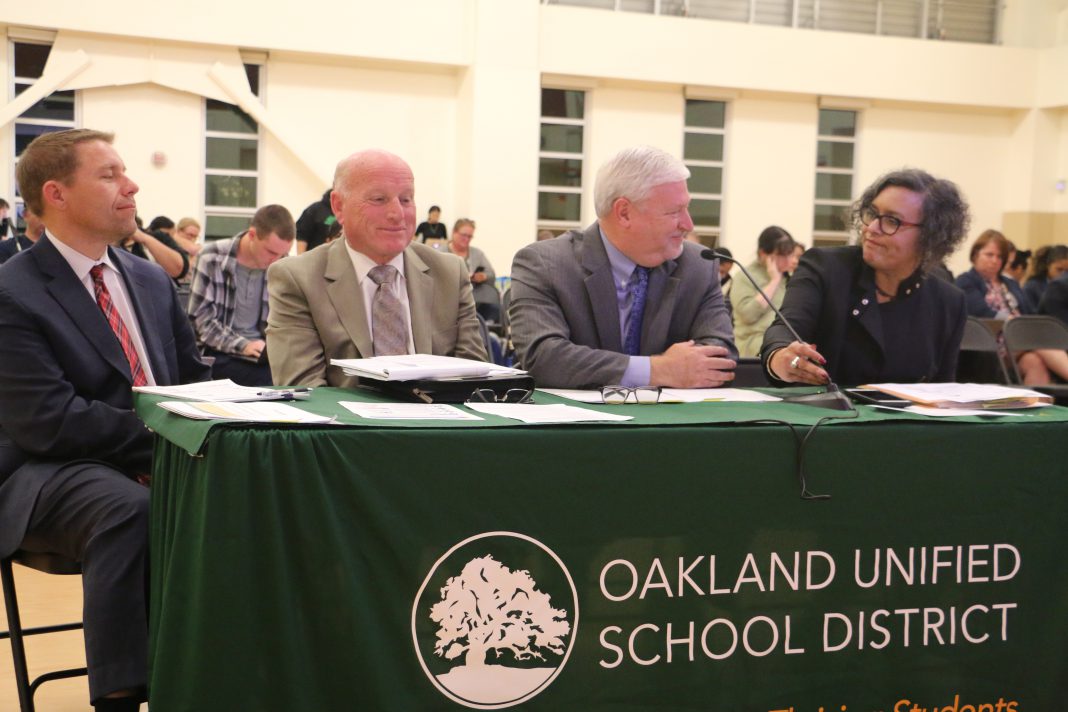 Local residents are scrambling to oppose a state bill that they recently found out about that would require the Oakland Unified School District (OUSD) to sell, lease or consolidate public school properties in order to receive temporary special funds to mitigate the impact of state-required budget reductions.

The wording that impacts OUSD is one section of the 83-page “2020 Governor’s Budget Education Omnibus Trailer Bill,” which covers a wide range of issues and is scheduled for approval by June 15 or earlier.

The OUSD section amends a previous law, AB 1840,  backed by Senator Nancy Skinner and Assembly members Buffy Wicks and Rob Bonta, which currently says the district “may” sell public property to achieve financial stability but is not required to do so.

The amendment  says state aid for OUSD would  be “contingent” on “new conditions” as follows: “affirmative board action to continue planning for, and timely implementation of a school and facility closure and consolidation plan that supports the sale or lease of surplus property,” according to a March 2 letter from the Fiscal Crisis and Management  Assistance Team (FCMAT), a state-funded agency that oversees OUSD for the state along with the Alameda County Office of Education and has a long history of pushing the district to close schools.

A resolution opposing the amendment was recently passed by the  Representative Council of the teachers’ union, the Oakland Education Association (OEA).

In a June 4 letter to Gov. Gavin Newsom and State Supt. of Public Instruction Tony Thurmond, OEA President Keith Brown wrote,  “The current (bill) adds requirements for OUSD to close and consolidate public schools in order to quality for AB 1840 funding …(though) AB 1840 was never intended to force school closures.”

Forcing the district to close schools is a terrible idea made even worse at the present moment, Brown said.

“Closing school facilities now will exacerbate the ongoing public health crisis, cause negative social-emotional and educational outcomes and negatively impact OUSD’s financial stability,” said Brown. “To preserve necessary resources during this ongoing pandemic, we should modify the Trailer Bill to prevent any permanent school closures or consolidations for OUSD until the COVID-19 crisis ends.”

Brown also emphasized the impact of school closures on Black and Latino students. “Permanent school closures and consolidations disproportionately impact student and communities of color – our most vulnerable students and families, and the same communities suffering the worst outcomes from COVID-19.”

Brown endorsed amendments to AB 1840 proposed by Assembly member Rob Bonta that would ensure that OUSD preserves all available public school facilities for the duration of the COVID-19 public health crisis, which are necessary to facilitate social distancing when children return to school.

In an interview with the Oakland Post, Bonta said the Trailer Bill amendment  “could be interpreted, would likely be interpreted, to require school closures and consolidations.”

“I’m seeking to have the bill changed,” he said. During the present pandemic, he said, “We need more outdoor and indoor space… which should be used to keep students safe.”

Bonta said that from what he is hearing, FCMAT and OUSD are the ones backing the Trailer Bill amendment. He said the people who introduced the amendment did nothing to inform him, Wicks or Skinner, who were the authors of the original bill, AB 1840. “I don’t want to be a part of any budget language that suggests or explicitly states that they should close or consolidate schools,” he said.

Some education activists view the proposed amendment as an attempt to make it more difficult for a new anti-closure school board, if one is elected in November, to reverse the decisions of the current board.

“Seems like folks behind this trailer bill amendment to AB 1840 are more fearful that a new four-seat Oakland school board majority might derail their plan to close Oakland public schools and sell/lease public school property before the AB 1840 fast-track real estate sale provisions run out, than they are fearful of the coronavirus,” said Jim Mordecai, education activist and retired teacher.

In an interview with the Oakland Post, FCMAT CEO Michael Fine denied the amendment requires the school district to sell property in order to get state relief funding, contradicting what others see when they read the bill.

“All we are calling for them to do is proceed with their planning,” he said. “We don’t dictate what their plan is. It is their local plan.”

“Closing schools or reconfiguring schools is one of the many things they need to consider,” he said. “If they decide that is not workable, there’s no problem – the state is not dictating how they stabilize themselves. But if they decide on a plan and don’t move forward on it, that’s a problem.

“The district is making great progress,” Fine said. “They’ve done an outstanding job in the past year.”

Opinion – City Must Act on the Voters’ Will to Protect Workers