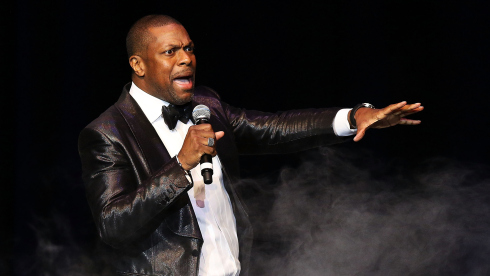 By Mercedes J. Howze
Special to the NNPA via The New Pittsburgh Courier

PITTSBURGH (NNPA) — Chris Tucker defied two really big Pittsburgh untruths on May 1 for his show in the Cultural District. First, the “Friday” star was on time. The comedian was not drowned out with four opening acts. He hit the stage at approximately 8:20 p.m.—that’s 20 minutes after the start time. That has to be a record.

Secondly, Tucker put on a respectable show without incident at one of the classiest venues in Pittsburgh, Heinz Hall. I’ll never understand why performers use Soldiers and Sailors Memorial Hall when Heinz Hall is a beautiful, lovely location.

And get this—he was on stage for 90 minutes! Ninety minutes! He did not have a drink, a cigarette, water bottle or any other accessory that comedians normally bring to the stage.

I have never seen that much energy on the stage from a headlining comedian. Tucker is undeniably funny. From his troubles with the IRS to serenading the crowd with his unique voice, Tucker resembled his early days on “Def Comedy Jam.”

The turnout wasn’t bad either. Between a Marvin Sapp concert at Mt. Ararat Baptist Church and hundreds of boxing fans flocking to Vegas for fight night, people came out to support the “Rush Hour” star.

As for the age of old question: Will Chris Tucker star in “Last Friday” or “Rush Hour 4?’ I don’t know if there’s any real hope for Tucker to complete the fourth installments of either movie. But, I’m confident that he’s ready for both, if presented with the opportunity

In previous interviews, the 39-year-old was adamant about not participating in anymore “Fridays.” But, during his show, it seemed as if he was wrestling with the idea. Although the storyline for “Last Friday” would be difficult seeing as how Mike Epps is the new funny face for that film series. Is there enough room for both Smokey and Day-Day on one screen? I doubt it.

“Friday” Director F. Gary Gray reunited with the original cast for the 20th anniversary. The movie was re-released in select theatres on April 20. The movie’s soundtrack, which eventually went double platinum, was also re-released to commemorate the milestone. Tucker posted a picture on his Instagram of the reunion:

In other Ice Cube news, “Barbershop 3” will be released February 2016 and it is starring Ice Cube, Cedric The Entertainer and Nicki Minaj. Sidenote: Why did Eve get the boot? You know Ice Cube is good for replacing somebody.

As for “Rush Hour 4,” Tucker says he calls Warner Brothers everyday asking them to make another “Rush Hour.” “Rush Hour” will always be my favorite comedic movie series.

Tucker has a few things coming up. In July, Netflix is set to release the actor’s first stand-up comedy special, “Chris Tucker Live.” On a personal note, Tucker is engaged to Atlanta news anchor and longtime girlfriend, Cynne Simpson. He joked briefly about his upcoming nuptials, a pre-nup and the difficulties of dating prior to Miss Simpson.

A Star-Studded Tribute to Blacks on TV, Yesterday and Today