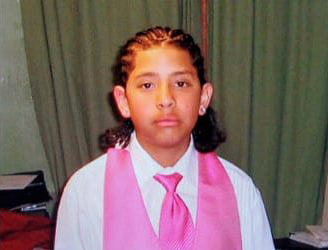 As calls to defund the police intensified nationwide, protestors demanded justice this week for Erik Salgado, 23, a Hispanic man shot and killed in East Oakland by California Highway Patrol officers on Saturday night after officers fired dozens of rounds at the car he was driving. Salgado’s pregnant girlfriend, Brianna Colombo, also 23, was injured in the shooting and is hospitalized.

Community members marched to demand justice for Salgado near the site of the shooting on the 9600 block of Cherry Street on Monday, led by members of Salgado’s family. The shooting came as calls for police accountability in Oakland and around the country have intensified.

Neighbors who witnessed the shooting said that around 10:30 p.m., the car Salgado was in was stopped and was blocked on both sides by multiple CHP trucks. Independent journalist Shane Baurer spoke to multiple neighbors who told him that after his Salgado’s car was boxed in, Salgado revved the engine and began spinning the tires. “When the engine popped,” Bauer reported, police opened fire. Neighbors described officers firing around 40 shots at the vehicle.

Video indicates that police did not attempt to offer first aid to Colombo until five minutes after the shooting. Two hours after it occurred, video shows Colombo still on site – having yet to be transported to the hospital – despite being pregnant and injured.

In a statement released Tuesday, the Oakland Police Department, which is conducting an investigation into whether CHP officers violated the law or protocol when they shot Salgado, released a statement saying that Salgado “began ramming CHP vehicles” after officers tried to conduct the traffic stop.

A spokesman for the San Leandro Police Department said that the Dodge Hellcat Salgado was driving had been taken from a San Leandro car dealership that was looted during earlier protests. He said the police department did not know if Salgado was the one who stole the vehicle, however.

In a short statement from Mayor Libby Schaaf said the city was “committed to conducting a rigorous and transparent investigation” of the shooting. Little other information has been released by law enforcement.

Family, friends, and neighbors created a shrine to honor Salgado near the site of the shooting. At the protest on Monday, speakers also railed against the violent treatment of protesters by OPD at protests in response to the deaths of George Floyd, Breonna Taylor and others. Activists in Oakland have joined the national call to defund the police.

Related Topics:Erik Salgado
Up Next