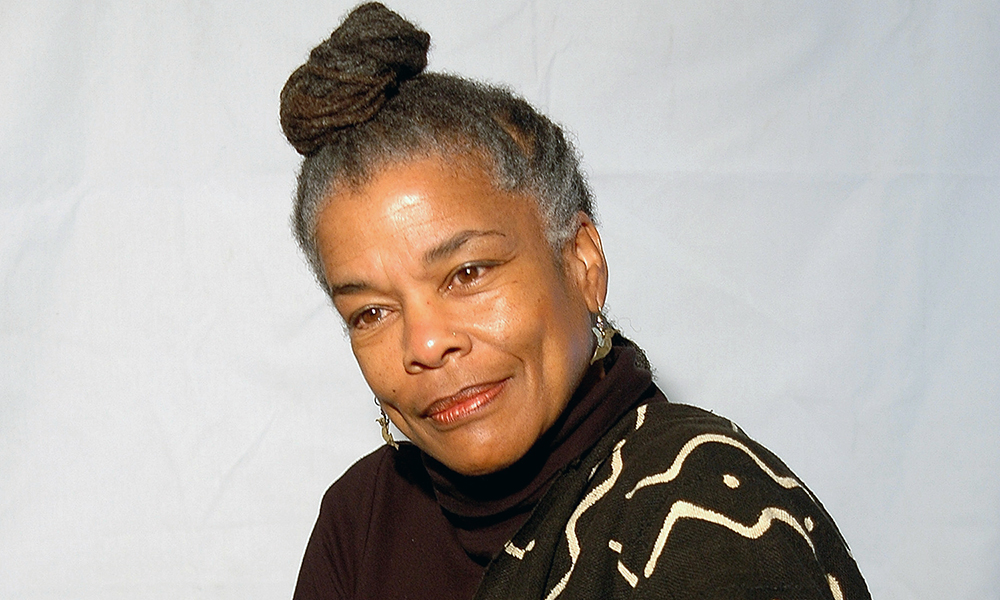 In her first full-length book of poetry, “Synchronicity The Oracle of Sun Medicine,” published by Oakland’s own Nomadic Press in February of this year, Oakland native Tureeda Mikell is almost as playful as she is critical.

I read the poems as liberatory spells against the damage and coercive power certain myths embedded in American culture can have.

“Why alter earth’s altar?” Mikell asks in her poem “Spell’s Labyrinths: Double Talk,” then soon after asks “Why did the son of the sun worship with warship?”

Like much of the book, wordplay and inquiry saturate language while commonly accepted meaning of words are never taken for granted.

She critiques war and seeking dominion over nature but instead of telling the reader what to think, she prods them with loaded questions, and we are forced to deal with both the loads and the questions.

For me, reading Mikell’s loaded questions sparked my own questions, like: What is earth’s altar? and, Who is the son of the sun? and How does he worship with warship?

Since Christianity is referenced so much in the book, I found myself seeing Christ as the “son of the sun.” In a poem just pages earlier called “The Sun,” Mikell uses an often overlooked quote from the Book of Matthew that rubs against the typical peaceful image many have of him. “Think not that I come to bring peace!,” Mikell quotes. “I come not to bring peace but a sword.”

Through her questions and quotes, Mikell builds a framework for the reader to consider the final line of “Spell’s Labyrinths: Double Talk,” which reads “Whose good is sacrificed for concepts of god?” The poem does not, however, provide any answers. It asks us to keep questioning.

What do the myths really mean? Mikell asks again and again but never answers. At times she digs to the bare bones of words to push that question, exploring their origins. In her poem “Worship Warship” she points out how the biblical word for “sin” is a “Greek word meaning ‘to miss the mark.’”

She revisits this commonly overlooked definition of sin in several other poems. In “Worship Warship” she asks “Why would god give his only son to / Die for us missing a mark?,” but never answers that question.

Besides religion, she also examines secular stories that shape how we see the world. In her humorous prose poem “BWYB News: The Goldilocks Cover Up,” she paints Goldilocks not as an innocent, curious little girl in but as a thief and a house intruder in the house of the three bears, naming her the “Golden Bandit.”

“Investigators confirmed strands of blonde hair found in baby bear’s bed did match that of the Golden Bandit,” reads the poem in the tone of a modern day news report. And yet, in the poem, the Golden Bandit is set free, claiming the bears made her fear for her life.

I think the poem asks why the Goldilocks fairytale is told in a way that paints her as a curious cute girl instead of a person causing harm. As the bears end up facing arrest in the poem after doing nothing wrong it becomes clear the Goldilocks story is racialized, that whiteness has a lot to do with our general view of Goldilocks’s, or the Golden Bandit’s, innocence.

Mikell also addresses Oakland history in the book, and questions the limited scope that many remember of the city’s radical history. Her poem “Life Light Remembered” critiques a reporter who called in 1994, over two decades after the narrator of the poem, who I’m assuming is Mikell, volunteered with the Black Panther Party, to ask “How many guns did you have at the / Black Panther Clinic.” The poem then lists the questions not asked: “Not how many services were provided? / Not how many programs were implemented? / Not how many doctors or healthcare workers volunteered?”

Like other poems in the book, “Life Light Remembered” critiques how many of us hesitate to explore myths, stories, or histories with a true sense of inquiry and imagination.

It’s a fun book. If you are the type of person who enjoys persistently asking and exploring questions about the myths and preconceived notions that shape American culture, I think you will enjoy it.