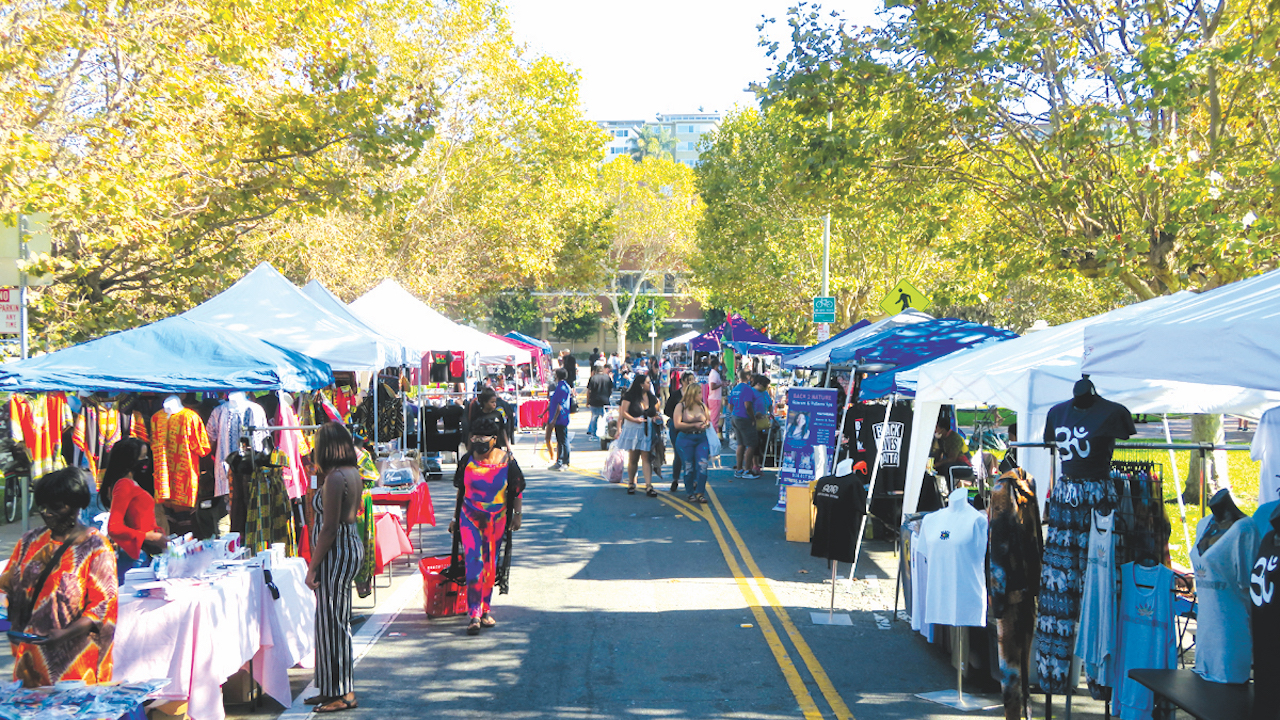 Oakland’s fourth annual Black Solidarity Week (BSW), which begins on Newton’s birthday, February 17, and ends on February 21, the anniversary of the assassination of Malcolm X, honors principles of liberation for Black people that both men espoused.

Sponsored by the Community Ready Corps (CRC) and the Black Solidarity Group and supported by James Copes of Old School Copes, BSW marks a time to observe what organizers call the nine Components of Self Determination. Those components include: Self Defense & Safety; Family System & Stability; Traditions & Ways; Technology & Efficacy; Education & Competence; Art & Media; Politics & Governance; and Health & Well Being.

On Saturday, there’s an opportunity to engage in the ninth component, “Economics & Prosperity,” in one of the premier activities for BSW — a vendor marketing event held on Saturday, February 20, from 10:00 AM to 5:00 PM at the El Embarcadero, between the Lakeside Library and the Pergola and Colonnade at the northeastern end of Lake Merritt.

“The power of Black solidarity is the impetus of strengthening the Black community to help it thrive and be successful, especially in the areas of economics and prosperity,” said Tur-Ha Ak, founder, and leader of the CRC.

This Black Solidary Market is an opportunity for Black vendors to showcase and sell their products to the public, which is one of the nine areas of self-determination and self-sufficiency that make up the CRC’s primary objectives since its concept in 2017, said Ak.

“Our prime objective is to build and/or contribute to self-determination in disenfranchised communities,” Ak continued. “We believe that, in order to be truly self-determined, community needs to be able to express power where power is being expressed.  With this in mind, we work towards the empowerment of oppressed people and communities in what we call the nine Components of Self Determination.”

Operating under the theme of “Contribution and Commitment,” the Black Solidarity Group has partnered with James Copes of “Old School Copes” who spearheaded and has been the spokesperson for past vendor marketing activities that have taken place on the eastern shore of Lake Merritt last summer.

That original market has since shuttered, and as a result of a pilot program that began last fall near the El Embarcadero, this new Black Solidarity Market event was born.

Copes said he expects approximately 30 vendors and artisans to be selling an array of products at Saturday’s event, some of whom have already signed up. “This is the first event at the lake organized this year and we hope to accommodate up to 40 vendors if necessary. We anticipate serving a large population of attendees as we’ve not had the opportunity to experience an event such as this for some time,” Copes said.

Pop-up vendors will have available Oakland products, art, clothing, candles, jewelry, Black books, and T-shirts, among the many unique items that attendees can purchase.  Additionally, there will be food vendors offering an array of meals for everyone’s appetite and desire. There will also be live music and fresh market produce will be given away to attendees, Copes said.

“CRC’s involvement with the BSW is a concept that we created, which was launched in 2017,” said AK. “This is part of our Black solidarity agenda and we feel it is vitally important to build self-sufficiency in all nine areas. This was already happening with what Copes was doing in the past, so we didn’t have to reinvent the wheel.

“We are providing resources and basically magnifying an event that has already been established. Together, we’re fulfilling the goal of creating economics and prosperity in our community,” Ak said.

“Our goal is to collaborate and partner with the City to keep this market going,” said Copes.  “We’re looking forward to the support of City Councilmembers Carroll Fife and Nikki(Fortunato) Bas whose districts border the lake.  We will continue to move forward and find resources to support vendors to build a strong economic base.”

“This first pop-up event of the year is encouraging,” Copes added. “The pandemic continues and has gotten worse, particularly for Black folks, who have been struggling to stay afloat.  It is people of color who have been affected most by the pandemic because we are the ones who do the service jobs and are more susceptible to becoming infected by the virus.”

Event Coordinator Denmark Peoples said precautions are in place for this weekend event. “We will be following and adhering to all CDC guidelines for the protection and safety of all attendees,” said Peoples. “Temperatures will be checked at vendor stations and everyone will be required to wear masks as they stroll throughout the market.”

“This Fourth Annual Black Solidarity Week is an opportunity for the community to support Black vendors. This ties in the overall theme and Black agenda of CRC’s primary objectives,” Peoples said.