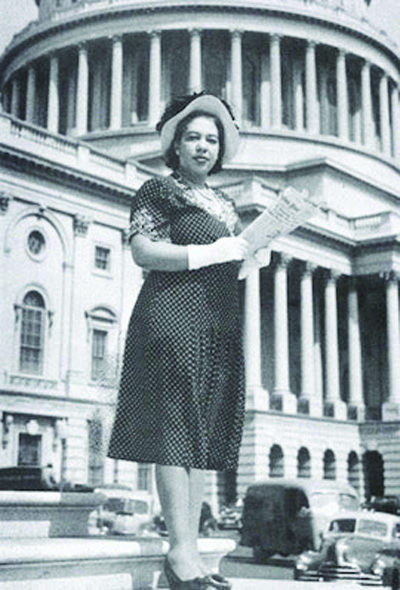 Her father was a sharecropper and her mother took in laundry. Her grandparents were born into slavery. She endured poverty, segregation and sexism. Yet none of these factors impeded her ambition to become a journalist.

Alice Allison Dunnigan (1906–1983) would become the first black woman accredited to cover the White House. But not all Americans were ready to accept her in this position; their actions would soon make that clear.

Dunnigan covered Congressional hearings during a time when racism in America was rampant and the N-word was commonly used on the floor. She was barred from reporting on a speech given by then-Pres. Dwight Eisenhower. Upon the death of Sen. Robert Taft (1953), Dunnigan wrote her report while sitting in the servants’ section.

Dubbed a “straight-shooter,” politicians went out of their way to avoid Dunnigan’s tough questions, which often involved race. During formal functions held at the White House, she was often mistaken for the wife of a visiting dignitary. A Black woman attending such events, and alone, was unimaginable.

Born in Logan County, Ky., Dunnigan had a natural talent for writing. She entered school at age four and was reading before first grade. At age 13, she became a reporter for the Black newspaper the Owensboro Enterprise. Her assignments were one-sentence news items.

The Russellville school system at that time only made education available to Black students for 10 years. On graduating high school, Dunnigan’s parents felt that encouraging their daughter to further her education wasn’t necessary.

But a Sunday school teacher who saw that Dunnigan had promise intervened. After some convincing, Dunnigan attended Kentucky Normal and Industrial Institute (now Kentucky State). She became a teacher (1924–1942), a profession she did enjoy, but it left her longing to write.

Teaching jobs at that time offered only meager pay. During summer breaks, Dunnigan worked for a white cemetery where she washed tombstones; worked in a dairy four hours each day; cleaned houses; and took in laundry. All this totaled about seven dollars a week. But a 1942 call for government workers would soon change the trajectory of Dunnigan’s life.

Dunnigan relocated to Wash., D.C., where she worked for the federal government. After a year of night classes at Howard University, she accepted the position of Washington correspondent for the Black-owned weekly newspaper the Chicago Defender. The editor initially offered Dunnigan less money than her male peers, reasoning that she had to prove herself and her worth to the paper.

The government at first denied Dunning’s request on the grounds that she was writing for a weekly newspaper; reporters covering the U.S. Capitol were required to write for dailies. She was granted clearance six months later, making her the first African-American woman to gain accreditation.

In 1947, Dunnigan was named bureau chief of the Associate Negro Press in Wash. D.C. For 14 years she filed stories printed in 112 African-American newspapers across the country, a door-opening experience for many who followed.