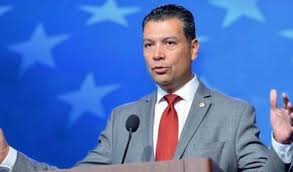 Padilla is from Los Angeles, of Mexican descent, and has held public office since 1999, 21 years, when at age 26 he was elected to the Los Angeles City Council.

There had been intense lobbying to appoint a Black woman to fill the seat and/or a Latinx person, replete with full page ads and open letters to Governor Newsom.

Padilla issued a statement via Twitter video:  “I am honored and humbled by the trust placed in me by Governor Newsom, and I intend to work each and every day to honor that trust and deliver for all Californians.  From those struggling to make ends met to the small businesses fighting to keep their doors open to the health care workers looking for relief, please know that I am going to the Senate to fight for you.  We will get through this pandemic together and rebuild our economy in a way that doesn’t leave working families behind.”

Via Twitter, Representative Barbara Lee congratulated Padilla:  “ a skilled legislator and a steadfast advocate for justice.  I believe he will be a powerful voice in the Senate for those who continue to be denied our country’s promise of equality.”

The New York Times, CNN, NBC News, Wikipedia, and Twitter were sources for this report.