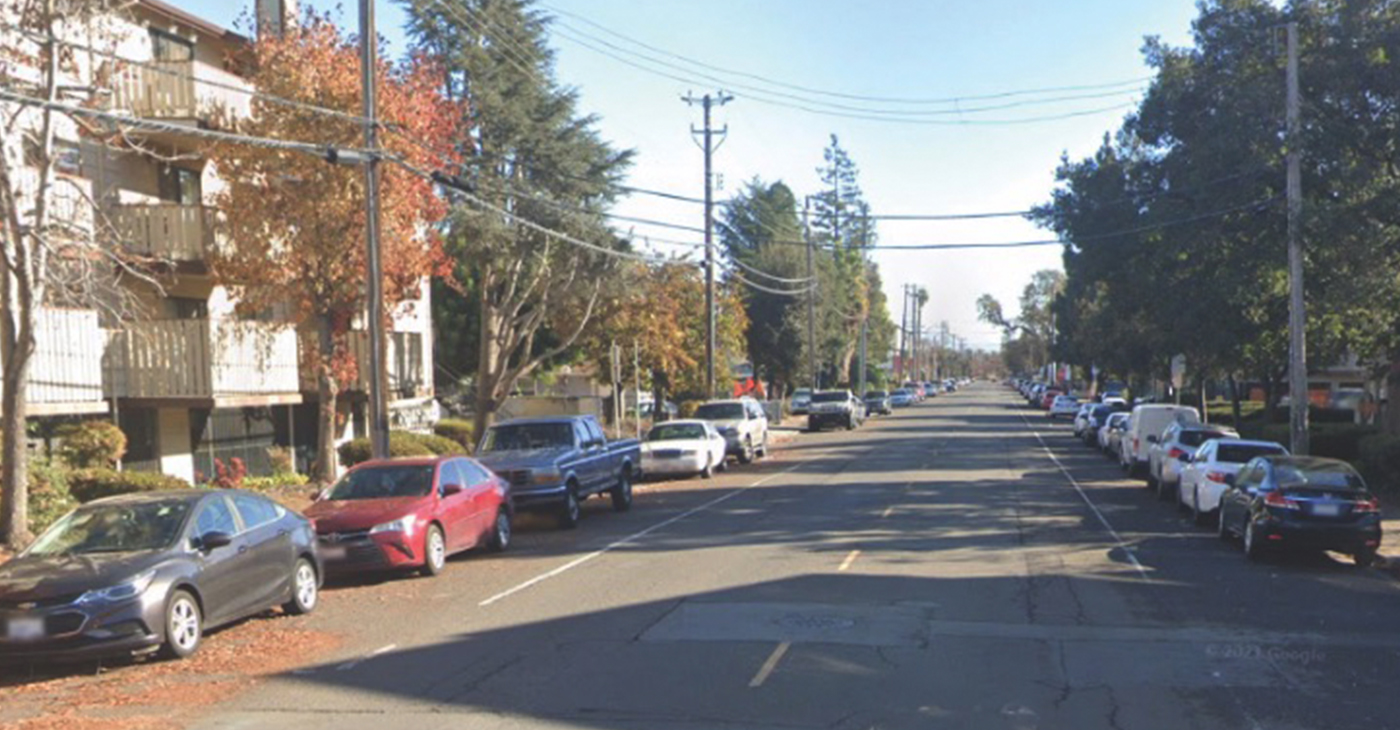 From City of Hayward

Users will be asked to set up an account, which entails adding vehicle information, the applicant’s name, telephone number, email address and selecting an address within the applicable parking area. Users also will be asked to select a password to access their online account in the future for renewals, vehicle changes and other updates. 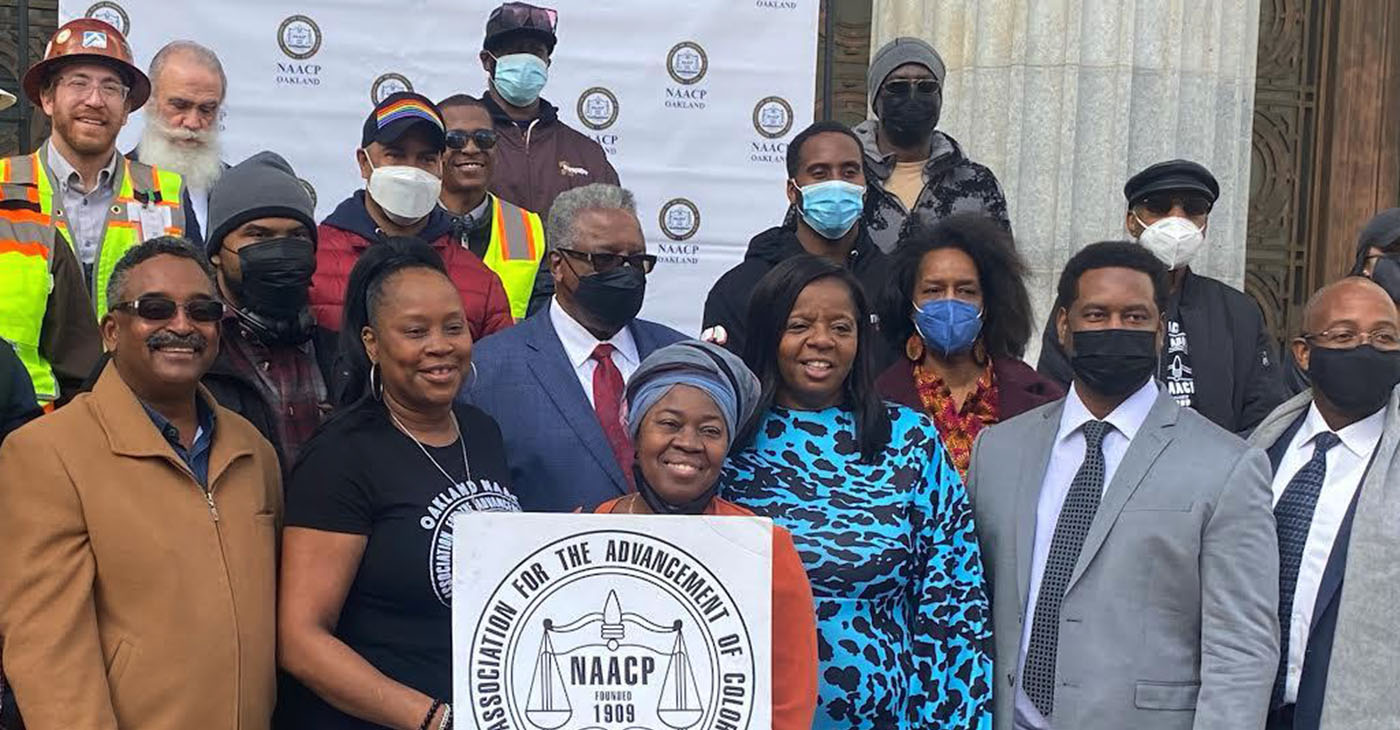 On Tuesday, Jan. 18, 2022, a coalition of community and business leaders held a press conference to call out the request by the City of Oakland’s Department of Transportation (DOT) to waive requirements that would ensure that small, local businesses get opportunities to bid for paving contracts worth up to $60 million.

In blatant disregard for the City’s policy, the DOT requested that five contracts be awarded to Gallagher & Burk, McGuire & Hester and O.C. Jones & Sons, three non-minority contractors headquartered outside the City of Oakland.

Oakland NAACP Chapter President George Holland noted that this item was ironically scheduled a day after MLK Day. “It is a shame that we are still fighting for the same things that Dr. King fought for nearly five decades ago. We will not concede the progress we have made and understand we have a long way to go.”

Councilmember Taylor’s office released a statement. “If we were to approve this waiver without pushing for higher levels of participation from our local, small, and diverse contractors, it would undermine the work that we have been doing over the past year. That is why I proudly stand with the community members calling for us to have a more concerted effort to seek out diverse contractors and will not support the requested waivers.”

Although unable to attend the press conference, Ed Dillard of the NAACP LIC stated, “Black contractors are taxpayers in Oakland and deserve work on City of Oakland funded projects. These Black contractors provide jobs for Oakland Black residents.”

When reflecting on her work to address the City’s contracting issues, Cathy Adams, president of the Oakland African American Chamber of Commerce notes, “We are committed to ensuring Black businesses receive their fair share of City contracts.

Reid stated “It is an honor to stand with you all today and agree that we have to unite our power to deliver votes that delivers for us, our communities and our City to ensure we have an equitable outcome for all.” She also indicated that she would vote against the waiver.

Each organization echoed the sentiments expressed that the proposed waiver means a loss of opportunity, a loss of local businesses and a loss of jobs for Oaklanders.

District 3 Councilmember Carroll Fife motioned that the awards be rejected and sent back out to bid. Councilmember Taylor seconded the motion with an amendment that the bidders be given until Friday, Jan. 21, 2022, to comply with the City’s L/SLBE requirements.

Council directed staff to work with the bidders to ensure that they comply with the City’s L/SLBE requirements in a unanimous vote with the motion as amended.

Of the 53 public speakers at the meeting, 32 opposed approving the EIR, raising significant concerns about the impact of the project. Speakers included representatives of community organizations, spokespeople for major Port of Oakland businesses and the ILWU, the union representing Port longshore workers. 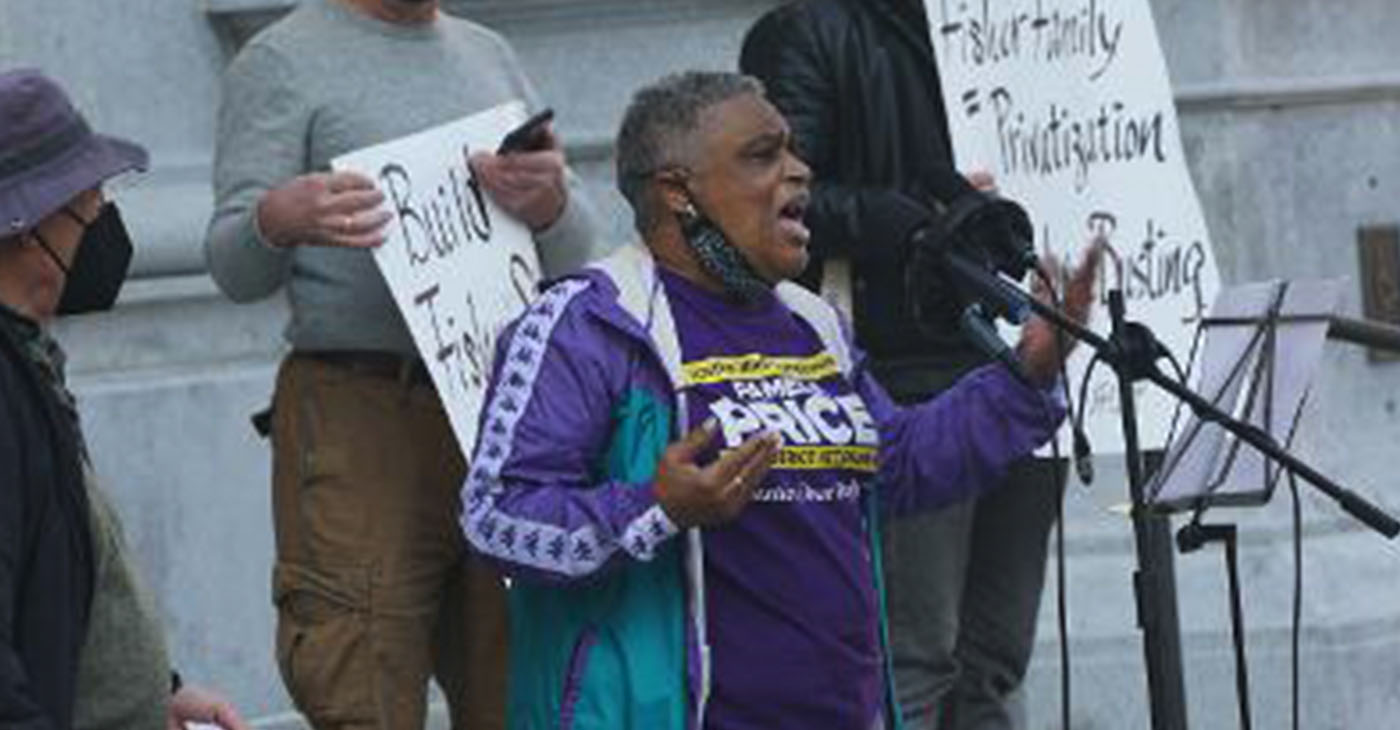 While a victory for Fisher and Mayor Libby Schaaf, who is an outspoken proponent of the development, the Planning Commission vote on Wednesday is only a recommendation. The report will now go to the City Council, with a review expected to begin in February before a vote on approval.

City staff are still in the process of negotiating with the A’s corporation over the financial impacts and other issues that are part of a Development Agreement which ultimately must go to the City Council for approval.

While there were 227 attendees at the Zoom commission meeting, city staff had posted the wrong link to the meeting on the city’s Planning Commission webpage making it likely that many people were unable to watch or participate in the meeting.

Of the 53 public speakers at the meeting, 32 opposed approving the EIR, raising significant concerns about the impact of the project. Speakers included representatives of community organizations, spokespeople for major Port of Oakland businesses and the ILWU, the union representing Port longshore workers.

In their unanimous vote in favor of the 3,500-page document, commissioners brushed aside residents’ concerns about the flaws and omissions in the report, as did Schaaf, who seemed exuberant in a press statement announcing the commission’s decision.

“Tonight’s Planning Commission recommendation to send the final Environmental Impact Report on to the City Council for certification is a huge win for our entire region and puts Oakland one step closer to building a landmark waterfront ballpark district with the highest environmental standards,” Schaff said.

One speaker who raised concerns was Nathan Landau, transportation planner for AC Transit.

“Unfortunately, there are still some very serious unanswered questions on how this (project) will affect the AC Transit system,” he said. “We don’t see a document that addresses these things. (The
City) needs to dig deeper and develop an adequate transportation system” to support the proposed stadium.

Another speaker was Susan Ransom of SSA International, which handles 65% of the goods that go through the Port. She said the final EIR report was “speculative” presenting a “misrepresentation of the facts about water safety and maritime impacts,” which city staff has failed to discuss with the Coast Guard.

Before the project is finally approved, the Council must consider the General Plan Amendment, Rezoning, the Development Agreement and the preliminary development plan.

Approvals are also necessary from the San Francisco Bay Conservation and Development Commission (BCDC) and the State Lands Commission. 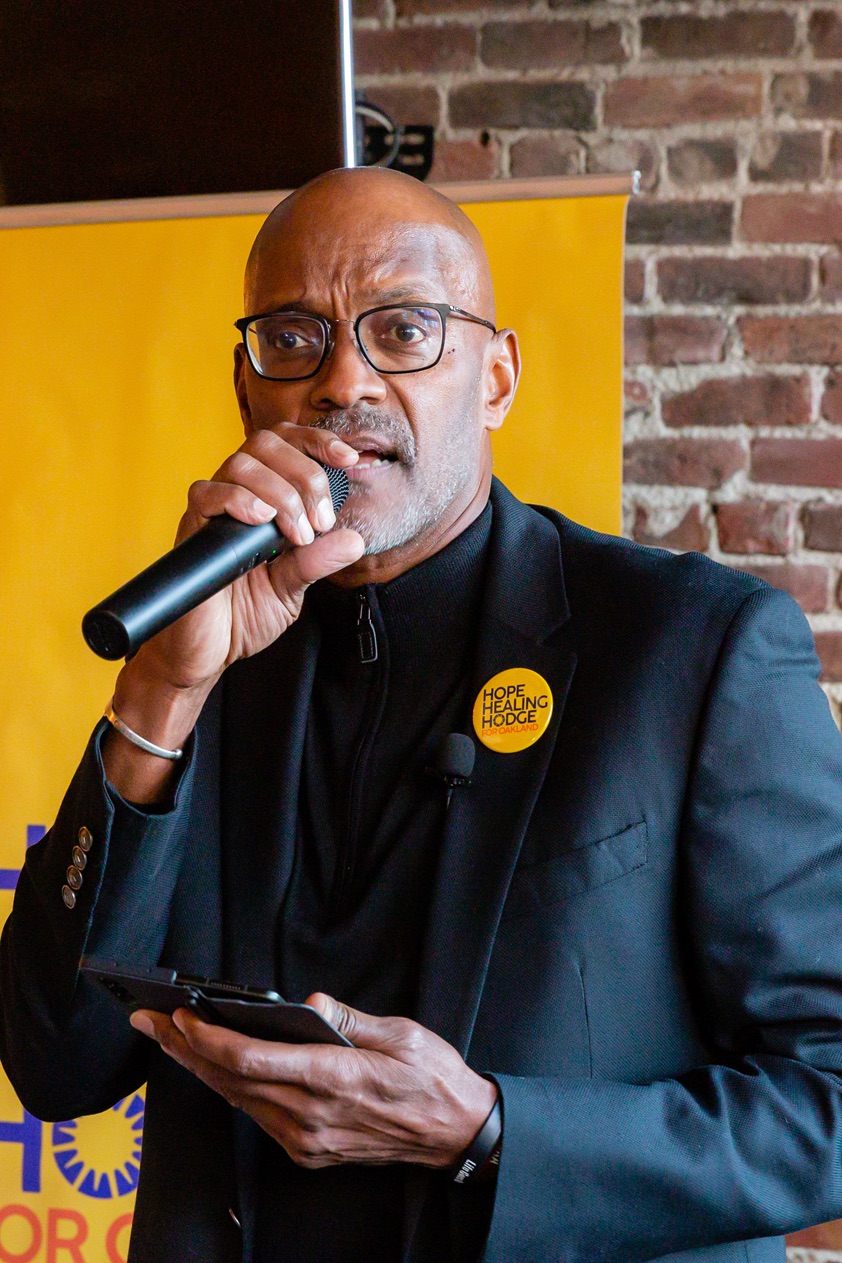 Gregory Hodge, candidate for Oakland mayor said, “Oakland’s physical and social infrastructure has deteriorated to the point of crisis. While we love our teams, we love our neighbors more. Paying their fair share is a tangible way for team owners to show that they love Oakland’s people more than making a profit.”

“What’s good for the goose should be good for the gander, the wise elders used to say. Let’s expedite an authentic community-driven process to bring fresh development ideas to the Coliseum neighborhood as we have seen in the latest round of supporting the A’s in their Howard Terminal effort. Our City’s administration owes that same level of expedience, efficiency and respect to AASEG (African American Sports and Entertainment Group).” 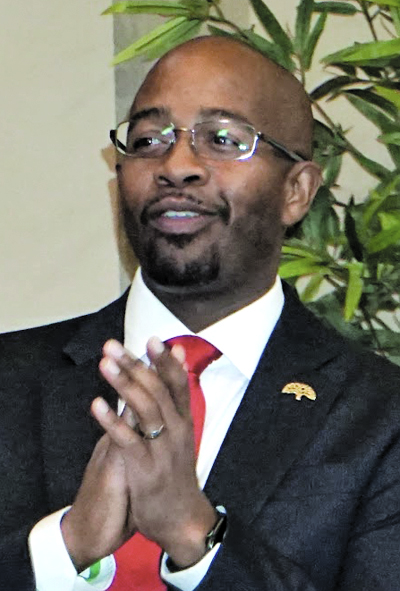 Loren Taylor, Oakland city councilman and candidate for mayor said, “Looking forward to having answers to questions addressed and answered before coming to council for a vote”

“Women can sometimes be left out of conversations around funding and technology. If our business isn’t technology-focused, we can find ourselves left out of finding ways technology can advance our business. But every small business can benefit from a technology upgrade, whether you are in the hair, food or mannequin industry,” said Judi Henderson, a RISE Investment Fund recipient and owner of Mannequin Madness in Oakland. “Comcast recognizes the many challenges women business-owners encounter and the RISE grant is helping put women at the forefront.” 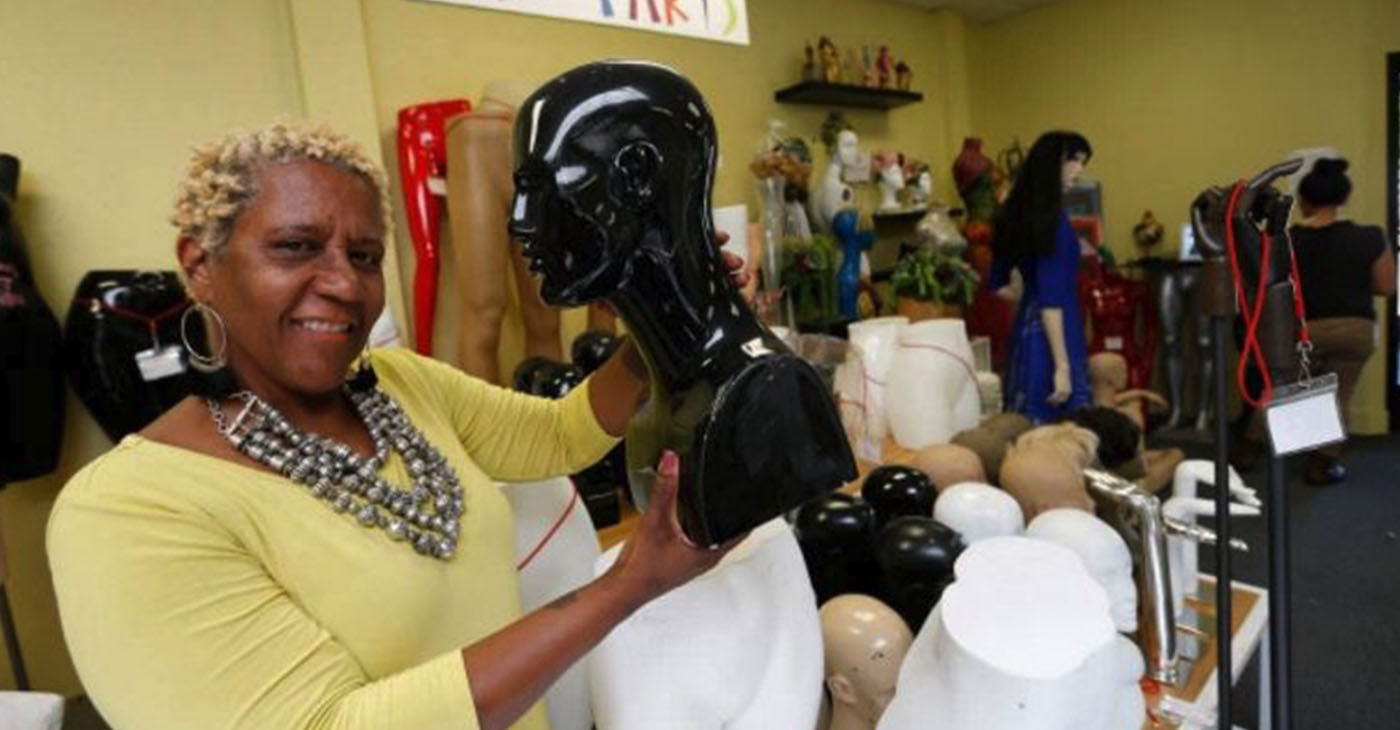 By Adriana Arvizo and Maddie Moore

As of Sunday, Jan. 16, all women-owned businesses within Comcast’s California service area are eligible to apply for the Comcast RISE program.

This major expansion of Comcast RISE furthers efforts to advance digital equity and helps provide underrepresented small business owners with access to the digital tools and funding they need to thrive.

Of the Comcast RISE recipients named in the program’s first year, nearly 70% have been businesses owned by women of color, spurring Comcast to take a deeper look into the unique challenges faced by women entrepreneurs.

According to a study by the National Association of Women Business Owners, 42% of businesses in the U.S. are owned by women, with more than 1,800 new businesses being started every day. This is nearly five times the national average.

However, according to the same study, women-owned businesses are growing at only half the rate of those owned by men, namely because women often face unique challenges when trying to access capital and other resources to help them succeed.

The Comcast RISE expansion to all women-owned businesses recognizes and seeks to help address these persistent inequities women continue to face in accessing the resources and funding that are critical to success.

“Women can sometimes be left out of conversations around funding and technology. If our business isn’t technology-focused, we can find ourselves left out of finding ways technology can advance our business. But every small business can benefit from a technology upgrade, whether you are in the hair, food or mannequin industry,” said Judi Henderson, a RISE Investment Fund recipient and owner of Mannequin Madness in Oakland. “Comcast recognizes the many challenges women business-owners encounter and the RISE grant is helping put women at the forefront.”

Comcast RISE, which stands for Representation, Investment, Strength, and Empowerment, is part of Project UP, and is accepting applications through June 17. Small businesses owned by people of color and women in California — in Comcast’s footprint — are encouraged to apply for the chance to receive consulting, media, and creative production services from Effectv, the advertising sales division of Comcast Cable, or technology upgrades based on their specific needs from Comcast Business.

For more information and the applications to apply for either the grant program or marketing and technology services, visit www.ComcastRISE.com.