(New York Times) – Suppose you accept the persuasive data that inequality has been rising in the United States and most advanced nations in recent decades. But suppose you don’t want to fight inequality through politically polarizing steps like higher taxes on the wealthy or a more generous social welfare system.

There remains a plausible solution to rising inequality that avoids those polarizing ideas: strengthening education so that more Americans can benefit from the advances of the 21st-century economy. This is a solution that conservatives, centrists and liberals alike can comfortably get behind. After all, who doesn’t favor a stronger educational system? But a new paper shows why the math just doesn’t add up, at least if the goal is addressing the gap between the very rich and everyone else.

Brad Hershbein, Melissa Kearney and Lawrence Summers offer a simple little simulation that shows the limits of education as an inequality-fighter. In short, more education would be great news for middle and lower-income Americans, increasing their pay and economic security. It just isn’t up to the task of meaningfully reducing inequality, which is being driven by the sharp upward movement of the very top of the income distribution.

It is all the more interesting that the research comes from Mr. Summers, a former Treasury secretary who is hardly known as a soak-the-rich class warrior. It is published by the Hamilton Project, a centrist research group operating with Wall Street funding and seeking to find third-way-style solutions to America’s problems that can unite left and right.

According to the Texas State Historical Association, weekend rodeos featuring Black cowboys began in the late 1940s, thanks to the formation of the Negro Cowboys Rodeo Association in 1947. 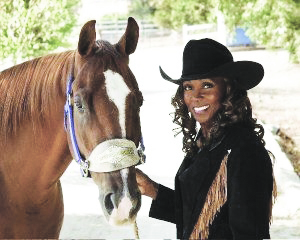 Rodeo is a sport in which cowboys and cowgirls showcase their skills in riding and roping. Its storied history has deep roots among many Blacks and Native Americans in the Midwest and South.

Developed during the second half of the 19th century, events mainly took place in northern Mexico, the U.S., and western Canada. Despite the numbers of Black cowboys at that time, none were able to compete.
According to the Texas State Historical Association, weekend rodeos featuring Black cowboys began in the late 1940s, thanks to the formation of the Negro Cowboys Rodeo Association in 1947. Many from this organization would eventually pass the torch to DeBoraha Akin-Townson.
Quickly rising in the sport, Townson not only picked up the torch but made history by becoming the 1989 International Professional Rodeo Association Western Region Champion and, in 1990, the first Black cowgirl to compete in the International Professional Rodeo finals in Tulsa, Okla.

She is also the only Black woman to compete with a professional card in the Women’s Professional Rodeo Association at the Professional Rodeo Cowboys Association events throughout the U.S.
Very little has been recorded about Townson’s life. What is known is that she is of Native American heritage (Cherokee and Arkansas Indian) and was born in Rockford, Ill. She is about 62 years old and still married to her long-time husband, Stewart Townson. Her all-time hero, she told Indian Rodeo News, is her “maternal grandmother, who taught me to please God first through obedience and discipline. She was a true Proverbs 31 woman, and I try with all that I am to model myself after the godly example that she showed me.”
In 1980, Townson attended her first rodeo in Hemet, Calif. That’s when her interest in participating in the sport’s professional ranks was piqued.
Her event of choice was ‘barrels,’ something she had enjoyed since she was a child. In this event, a horse and rider attempt to run a cloverleaf pattern around preset barrels in the fastest time.

Participants in this women-only event are known for quick turns and high speeds. The winner is determined by thousandths of a second, and Townson was fast. Yet she joked about a time when her horse finished the race before she did.
“It wasn’t so funny when it happened,” she told Indian Rodeo News, “but it became something that I could laugh about later. I fell off the back of my horse trying to pick up the third barrel. My horse finished the pattern without me with the fastest time of the rodeo. The barrel was up, but since I wasn’t on him when he crossed the finish line, it was a [disqualification].”
Today Townson works as a horse-racing instructor and has passed her love of the rodeo down to her children. She advises all youth to “dare to not just dream but dream big and find a rodeo mentor to advise you and spur you on.”

Taiwan’s office of foreign affairs contacted me to ask if I would be interested in receiving the Covid vaccine. 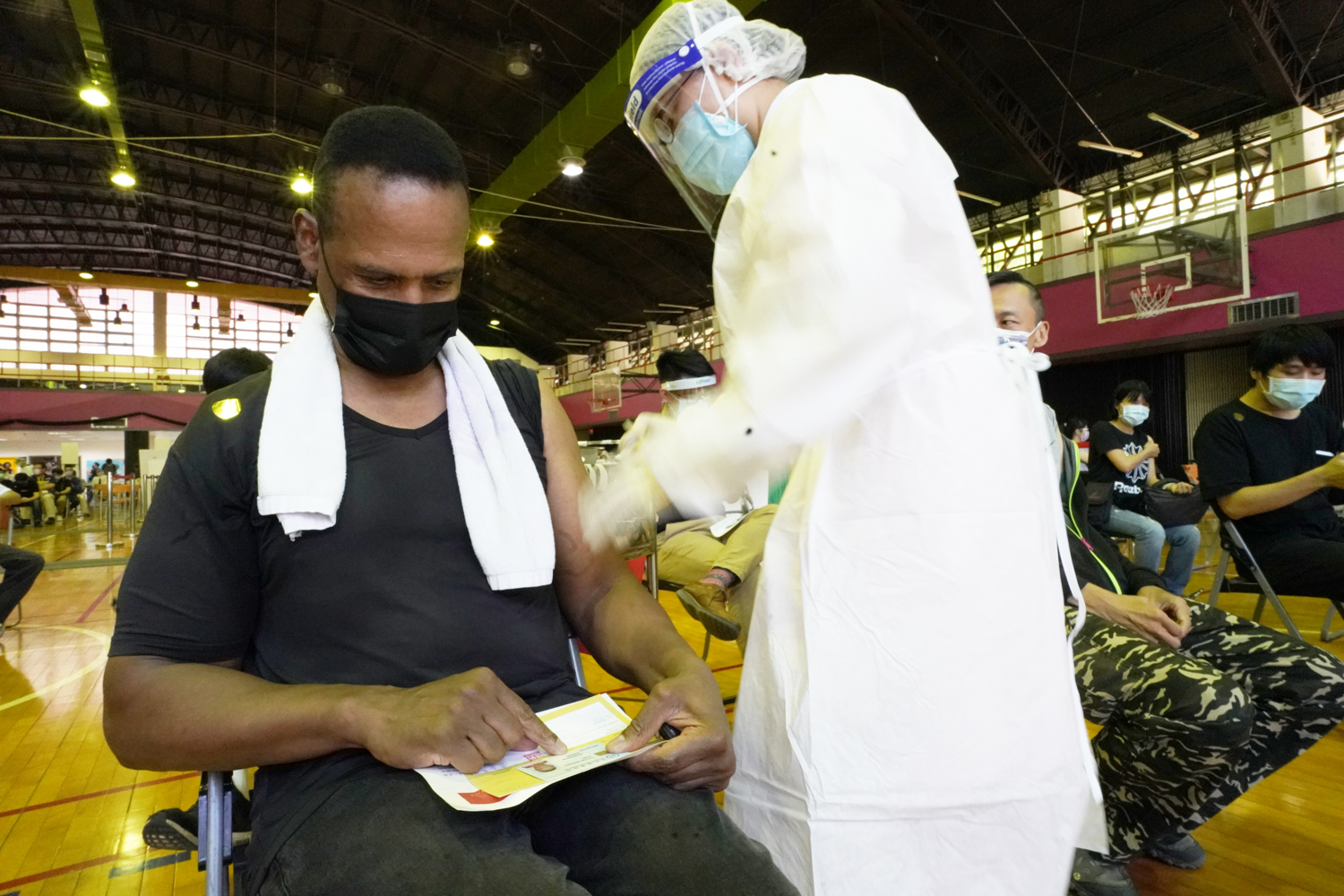 Greg Taylor in Taiwan gymnasium where he received the first shot of the Moderna vaccine.

Taiwan’s office of foreign affairs contacted me to ask if I would be interested in receiving the Covid vaccine. I was told to go online and make an appointment stipulating that I worked as a foreign journalist.

This dispensation granted me full and unfettered access to the Moderna vaccine. However, I think this access had more to do with President Joe Biden’s campaign of 80 million doses dispensed around the world that sent 2.5 million doses of Moderna to Taiwan.

On the 14th of July, as instructed, I showed up at a designated gymnasium to receive the first of two shots. This was indeed an exception extended to the foreign press in Taiwan. I saw no other foreigners in the entire gymnasium while I was there; and I learned on the 15th of July, that most Southeast Asian foreign workers were to receive AZ (AstraZeneca)—a debated lesser vaccine in the Pfizer, Moderna, J&J regimen.

Don’t put away that mask. While the American public might be celebrating the lifting of the tightest COVID-19 restrictions in most parts of the United States, the coronavirus pandemic is far from over. 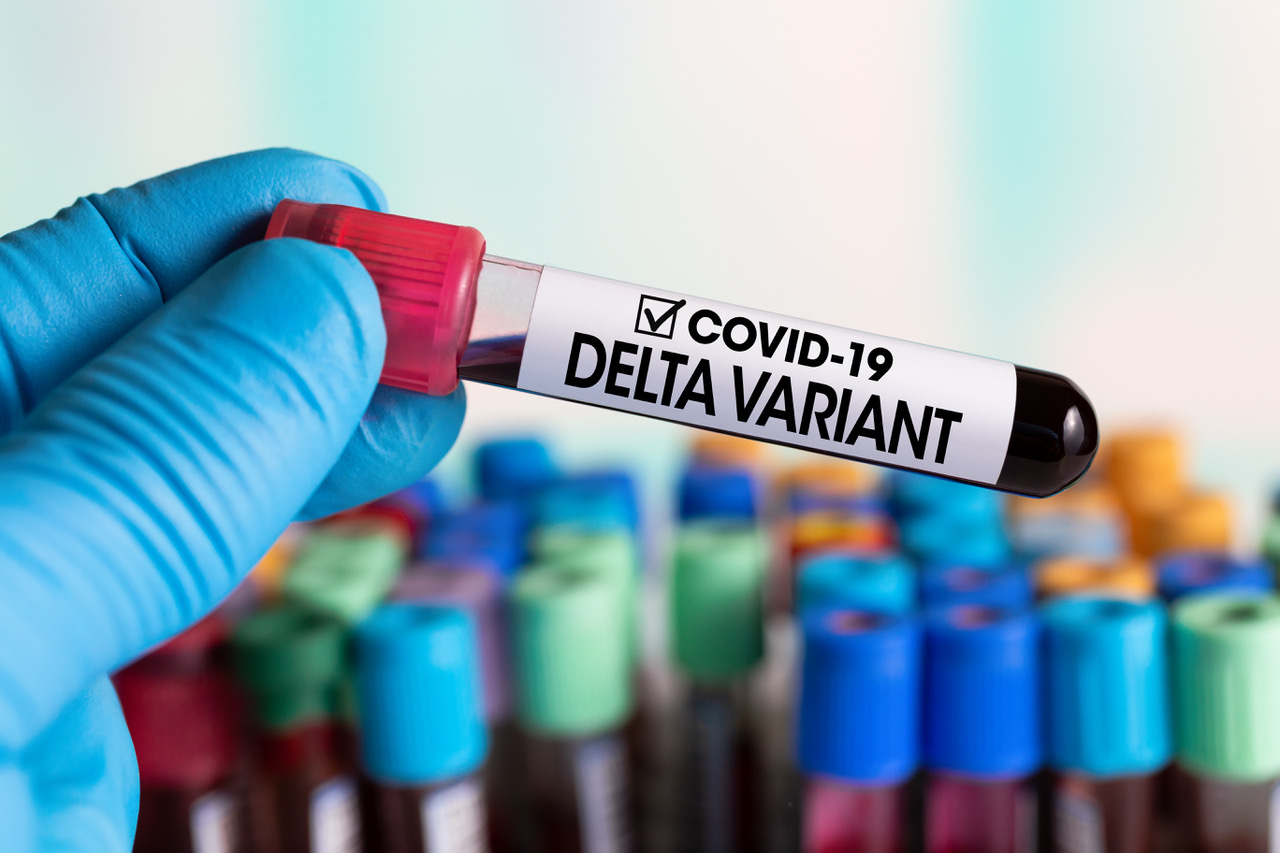 Don’t put away that mask. While the American public might be celebrating the lifting of the tightest COVID-19 restrictions in most parts of the United States, the coronavirus pandemic is far from over.

According to medical doctors, the U.S. is currently dealing with a new strain of the virus, the Delta variant, which is more lethal and virulent than previous strains. The Delta variant originated in India toward the end of last year and was first identified in America in March.
The Los Angeles County Health Department is so worried about a new outbreak, it told residents to mask up again.
“Since the Delta variant is more infectious than other variants, Public Health recommends wearing a mask around others in indoor spaces, regardless of vaccination status,” said the LA County Department of Health in a tweet.
Dr. Jerry Abraham, director of Kedren Vaccines at Kedren Health in Los Angeles, has already seen signs of the new strain in the Los Angeles community. He said medical professionals are already gearing up for what he called the “fifth wave” of the coronavirus pandemic.
“It’s already in L.A.,” he said. “We assume the rates will go back up.”
Like other viruses, COVID-19 is constantly mutating. When the virus encounters new hosts (particularly unvaccinated bodies,) it changes and gets stronger. The best way to eliminate the disease is to vaccinate about 70% of residents in a community (herd immunity,) so the virus doesn’t have any places to grow and survive.
Dr. Eric Feigl-Ding, an epidemiologist and health economist and a senior fellow at the Federation of American Scientists in Wash., D.C., emphasized this point during a recent Ethnic Media Services virtual briefing on the efficacy of continued mask use.
“The more warm bodies the virus has, the more opportunity it will have to mutate,” said Feigl-Deing, who is also the Chief Health Economist for Microclinic International, a San Francisco-based non-profit that bills itself as an organization that “revolutionize how deadly diseases are prevented and managed worldwide.”

“If you let it spread, it will mutate,” he warned.
Feigl-Ding added that, at this stage, reaching herd immunity is not realistic, and we need to look at alternative solutions to contain the virus, such as continued mask usage, ventilation, hand-washing, disinfecting surfaces and air purification devices.
But over the last year, the debate about vaccinations became political. A large number of people who supported former Pres. Donald Trump downplayed the virus and accused Democrats of overstating the severity of the pandemic. A lot of those skeptics even refused to take the vaccines.

Some say they don’t trust the science. Others do it to resist what they see as pressure coming from liberals. But health experts say refusing to take one of the three vaccines approved to fight COVID-19 in the U.S. is dangerous and only allows the virus to thrive.

Data is beginning to show the effects of politicizing public health. Deaths and infections are going up in red states, while the numbers have been steadily declining in blue states.
Medical data shows that 99% of recent COVID-19 deaths were unvaccinated people, according to Dr. Anthony Fauci, the nation’s leading virologist and director of the U.S. National Institute of Allergy and Infectious Diseases.
Abraham is a big proponent of vaccination and estimates his clinic has given about 300,000 inoculations to people in the South Los Angeles area. But he still sees worrying trends. According to Abraham, only about 40% of Black men in the area are vaccinated.
Abraham also warned the situation would worsen during the fall when it gets colder, and people spend more time inside. “It’s not a matter of if,” said Abraham.