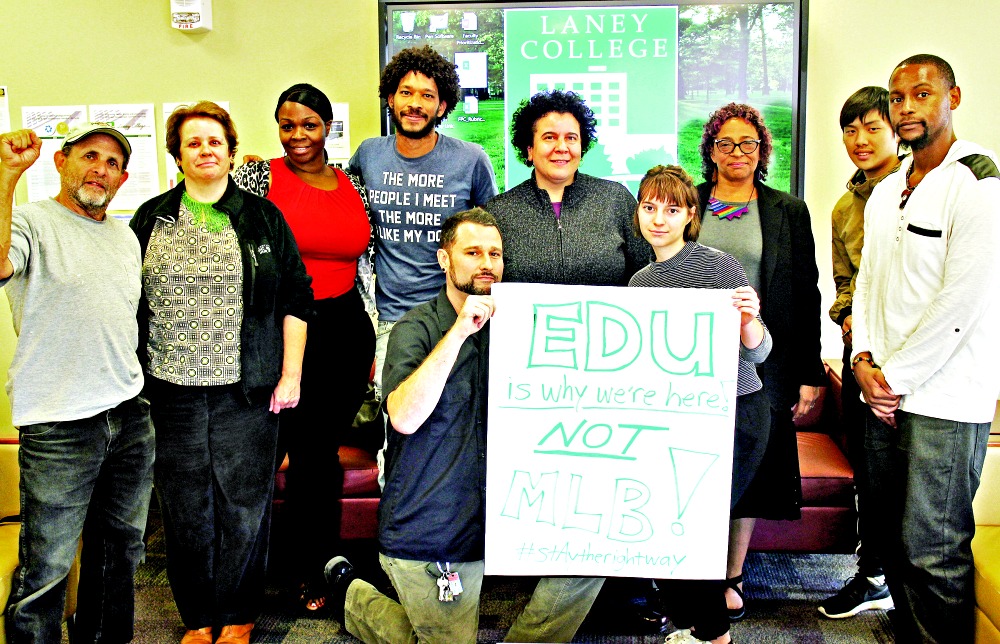 A number of students, instructors and employees at Laney College in Oakland are organizing to take a stand against the proposed A’s stadium in downtown Oakland. While many are themselves A’s fans, they are worried that the crowd-filled stadium and exploding property values that accompany the development would spell the end of their unique and beloved college as well as historic Chinatown and downtown neighborhoods.

“I know the opportunities this development affords to people, but I don’t know how you mitigate the noise and the crowds of people who come in for a live game or concert,” said Michael Wright, a library employee and Laney alumni, who is a member of the campus group opposed to the A’s downtown project, the Laney Land for Students Coalition.

“They have corporate, big business interests. Their interests and their wants will supersede the college,” said Wright.

“A lot of people, 68 games a year, monster truck rallies and concerts, these are the disruptions across the street from the college we are talking about,” added student Dejon Gill

The group is part of the Stay the Right Way coalition, which is opposing the project, and is allied with the Oakland Chinatown Coalition, the Asian Pacific Environmental Network (APEN) and other organizations.
In interviews with the Post, students and staff discussed what they believe is at stake.

They began meeting in September after reports appeared in the media about the proposed project, though it was not until Sept. 12 that the A’s organization formally sent a proposal to Peralta.

The A’s proposal may be called a stadium project, say members of the Laney group, but in reality, the plan is considerably more than that. It’s about real estate development and speculative land investment.

“This is real estate gold we’re sitting on. They are appealing to a certain class of people. It is the 1 percent. They want single white people who have the money who pay to play and live in these overly expensive units,” said Laney librarian Phillippa Caldeira.

A resolution opposing the stadium, pointing to the project’s connection to real estate development, was by the Laney Faculty Senate.

“A ballpark adjacent to Laney College would further drive intense, high-speed development, gentrification and displacement in the neighborhoods surrounding the college, including historic Chinatown, West Oakland and Eastlake, and would be devastating to the low-income, vulnerable communities we serve,” it read.

The A’s want to put their ballpark on the site of the Peralta Community College District headquarters at E. 8th Street and 5th Avenue, across the street from Laney College and next door to Oakland Chinatown.
Peralta’s administration is adamant that no decision for or against the project has been made and that the communitywide discussion has just begun. Ultimately, the Peralta board will decide.

John Reimann, a student, retired carpenter and former officer Carpenters Local 713, said he had done research on John Fisher, majority owner of the Oakland A’s, and found out that Fisher is not a friend of public education.

Fisher, son of the owners of The Gap, chairs the board of the KIPP Foundation, which is dedicated to training teachers for the KIPP charter school network. He also co-chairs the Charter School Growth Fund and is a real estate investor and hotel owner.

The students say they are fighting for Laney because it is a special place that provides a unique and nurturing environment for students. The college, founded in 1953, serves 10,000 students, predominately first generation, low-income and students of color and is the flagship of the Peralta district’s four colleges.

“A lot of our students have families, have children, have full-time jobs,” said Aisha Jordan, who serves on Laney’s student government.

“The attitude of our staff (is supportive). This is really an awesome school.”

“The community college is the place where returning students of a certain age can bring their life experiences. The sense of community is very special here at Laney,” he said.

“A lot of our students live in a disruptive environment,” said Laney instructor Kimberly King. “They need a safe place, a calm place where they can go.”

A’s Stadium Proposal “Is a Once in a Lifetime Opportunity,” Say Fans and Local Businesses