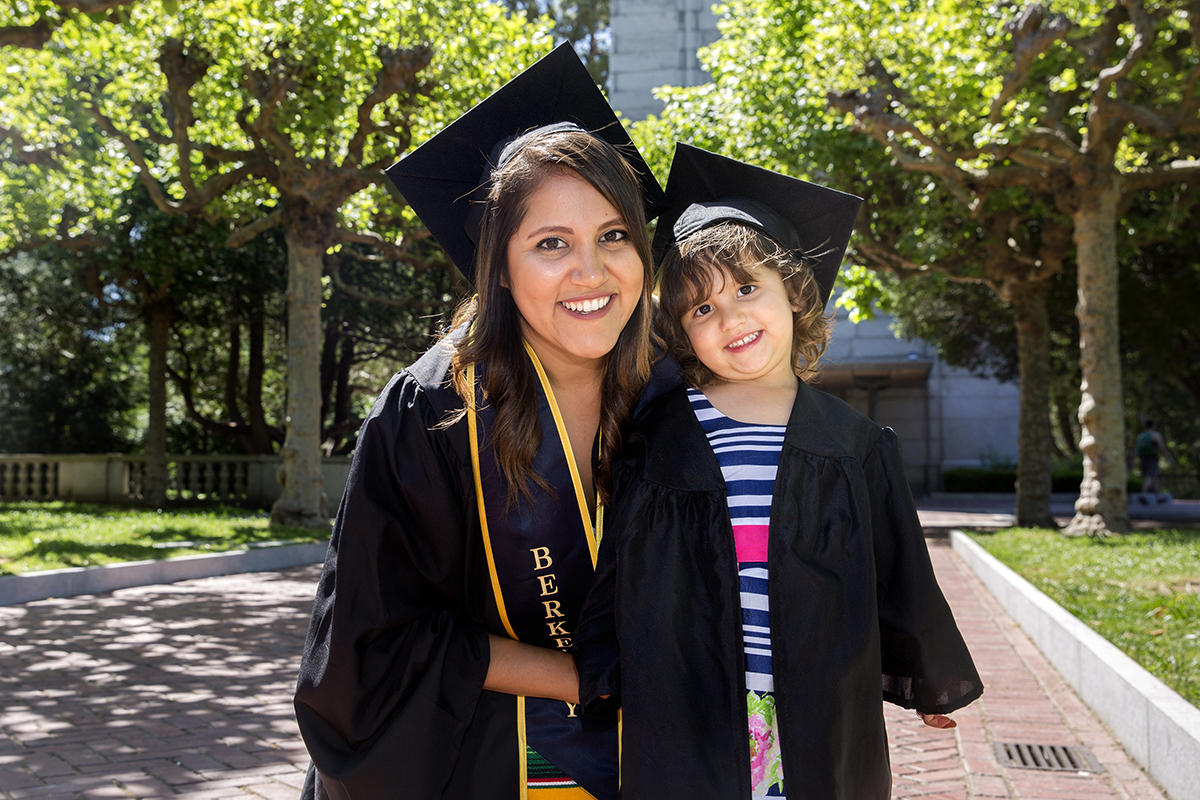 Majoring in sociology, studying abroad, joining student clubs, even learning to salsa dance. Natalie Ruiz was eager to see how much she could pack into two years at UC Berkeley when she arrived as a transfer student in fall 2013.

Then, three weeks into first semester, 21-year-old Ruiz discovered she was pregnant. “My first thought was, ‘I’m going to drop out; there’s no way I can do school pregnant and with a child,’ ” she says. “I couldn’t envision my graduation from Berkeley anymore.”

This past Sunday, May 14, Ruiz, now 25, she received her diploma from the Department of Sociology, her 3-year-old daughter, Clara, beside her. Not only will she graduate with high honors and a 3.97 GPA, but she’ll give her department’s undergraduate commencement speech.

Ruiz, who also wound up also majoring in social welfare, attended a second ceremony for the School of Social Welfare. She was awarded the highest honors and the Social Welfare Dean’s Award for Community Service.

In addition to juggling motherhood and two majors while at Berkeley, Ruiz was a legislative intern in the Cal-in-Sacramento program, completed a year-long senior honors thesis research project and raised $50,000 for a student-parent food-donation program. For her food security work at SPARR, Ruiz just received from UC President Janet Napolitano a 2017 President’s Award for Outstanding Student Leadership.

“She is my light and has given me more clarity moving forward than I ever thought I could have,” Ruiz says of her daughter, Clara. (UC Berkeley photo by Brittany Hosea-Small)

Even more remarkable, though, is Ruiz’s refusal while at Berkeley to be set back by a wave of additional challenges, including surgery for severe acute necrotizing pancreatitis. She was in the hospital for a month and wore a feeding tube, including at school, for half a year.

“Becoming unexpectedly pregnant just scratched the surface for Natalie, but she found a way to work through it to succeed,” says Luke Blanchard, a 2014 Haas School of Business graduate, Ruiz’s partner since high school and Clara’s father. “Did I ever think she’d give up? No, never. She isn’t a quitter. And she wasn’t alone.”

“There were some really scary moments where we were wondering how to make this all work,” says Ruiz’s cousin, Samanta Cubias, who lives in Oakland and was Clara’s frequent babysitter. “But we did it. Sí, se puede.”

The daughter of first-generation college students, Ruiz says “it was made very, very clear to me that education is a privilege, and you take every advantage of it.” In her last year at Solano Community College in Vacaville, she applied to nursing schools — “I had a vague goal; I just wanted to help people,” she says — but also to Berkeley, where she’d been denied admission as a freshman.

This time, she was accepted only to Berkeley, and chose to study sociology.

But after becoming pregnant, Ruiz doubted herself and felt self-conscious. She worried other Berkeley students wouldn’t accept her as a friend and felt her father pull away, disappointed, she says, “because I was pregnant and he thought I wasn’t going to finish school, and because I wasn’t getting married.”

“My dad is at peace with things now, and he is proud of me,” says Ruiz. “But back then, he was ashamed of me and didn’t want me to come home. I felt I had let him down.”