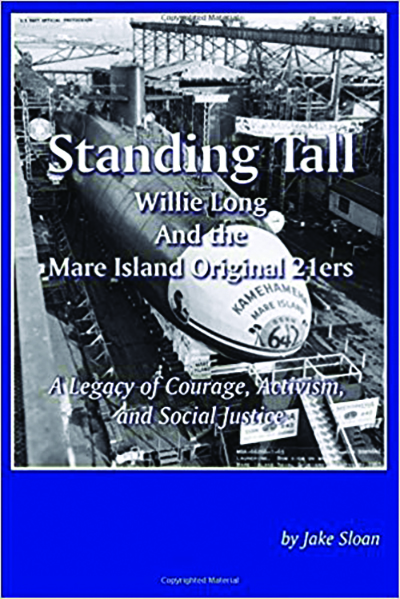 A Powerful Firsthand Account of Courage, Activism, and Social Justice in California During the 1960s
By Joe Fisher

“Standing Tall: Willie Long and The Mare Island Original 21ers, a new book by Jake Sloan, is an inspiring, sometimes firsthand account of historic events in the Civil Rights Movement that took place at the Mare Island Naval Shipyard in the San Francisco Bay Area during the 1960s.

In this educational book, Sloan recounts his role as one of the Mare Island Original 21ers, an activist group of 25 African American men working at the huge shipyard at the time, eight of whom, including Sloan, lived in Richmond.

As a pipefitter, he worked side by side with other men who suffered under organized, systematic, and, sometimes, unconscious discriminatory working conditions in hiring, training, promotions, and equal pay opportunities that had existed for decades at the shipyard.

Now, Sloan has written an outstanding tribute book to celebrate the important story of those unsung heroes, a story long untold, because of the great need for secrecy when it first unfolded.

According to Sloan, this activist group was led by Willie Long, a World War II veteran and Pearl Harbor survivor. Long was an excellent pipefitter who had worked for more than 14 years without a promotion, all the while watching other African American workers suffer similar racial discrimination as well.

By filing an historic racial discrimination complaint, the group that became known as Mare Island Original 21ers peacefully stood up for not only their own civil rights, but for all of the more than 1,000 other African Americans working at the naval shipyard at the time, many of whom were opposed to such direct action.

The complaint was filed in November 1961 with the President’s Committee for Equal Employment Opportunity identifying nine areas of discriminatory practices at the shipyard.

Due to the bravery and activism of the Mare Island Original 21ers, they were successful in helping improve equal opportunity practices at the shipyard over the years and possibly helped influence the Civil Rights Act, the creation of Equal Employment Opportunity Commission, and other affirmative action benefits for African Americans across the United States.

According to Sloan, “The Original 21ers’ legacy of courage, activism, and social justice continues to protect workers of all colors and impact labor laws in California and beyond even today. In honor of the many brave men in our group who have passed away since our work together in 1961, I have made it my life’s focus to carry forward those principles of fairness and equality in my labor management relations work.”

Sloan is the founder and president of Davillier-Sloan, Inc., one of the leading labor management consulting firms in California, and he has been dedicated to protecting the rights of workers in the construction industry for more than 50 years. He holds a Master’s degree in History from San Francisco State University. Sloan was recently honored with a special speaking engagement at the 2018 Global Hero Round Table, often called the “TED Talks of Heroism,” at the Marines Memorial in San Francisco.

To hear Sloan talk about the book in a recent interview, visit https://bit.ly/2JeGpL6. For more background and current information about the Mare Island Original 21ers, visit www.mareisland21ers.com.