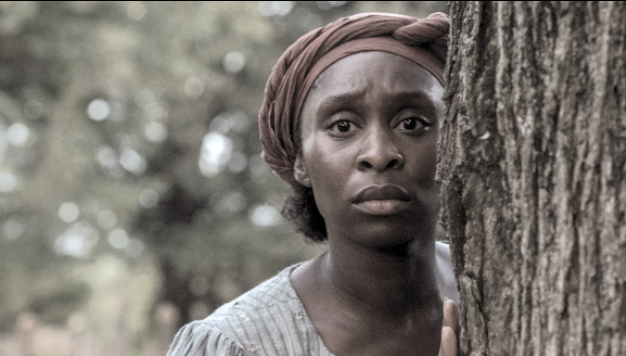 A woman of controversy even now, freedom fighter and liberator Harriet Tubman-Davis, as portrayed in this current iteration is stirring things up again. If a viewer is looking to see a story where white people are not cast as saviors and Africans as beasts, then this is not the film for you.

Clearly, there have to be bad white characters — it is, after all, the Antebellum South and Africans did not enslave themselves. However, this story tempers white folks with sentimental embellishment. If one can bracket the “Hollywood-ness” of this perpetuation of whiteness, then “Harriet” (2019) is the compelling story of a determined woman who is divinely guided.

The term liberation theology is seldom applied to the African people who actually epitomize this kind of thinking.  Liberation theology is undoubtedly philosophically centered aboard those slave ships with the Yoruba, Fanti, Akan, Christians and Muslims.  What other people sustained such a vision cross time and landscape for 400 years? It was a strategy that worked. Harriet is a descendent of that tradition.

In Erivo’s very capable hands Harriet is not just actualized, but embodied.

Marie and Harriet have many lovely scenes as the freeborn businesswoman, who has no personal knowledge of slavery, comes to both respect, admire and love Harriet as the two become confidantes. Clarke Peters gives a wise and compassionate portrayal of Ben Ross, Harriet’s father and Rit’s husband, as does Vondie Curtis-Hall who portrays Rev. Samuel Green, a secretly-abolitionist freedman, who gives Harriet important advice. All of this drama is set against a backdrop of Terence Blanchard’s score and John Toll’s lovely cinematography.

“Harriet” is a story of faith and it is also the story of a young African woman who is determined to free as many of her people as humanly possible. Early on, she learns that fear is her only enemy and when she learns this, she has no other problems — not her fainting spells from a head injury or the occasional setbacks incurred when she is moving through enemy territory with other Africans who initially challenge her leadership or want to turn back. The abolitionist is flexible and able to think on her feet. In one scene while she is unconscious, someone moves to touch her and another African stops the person and says Harriet is talking to God.

Though filmed in Virginia, “Harriet” is a mixed bag made in the studio.  There is a lot of tension, surprise, pursuit and close calls that Erivo’s Harriet handles with dignity and fortitude.  The film is not hard to sit through despite these tense moments, which could have been a lot worse as the violence toward Harriet is shown in a flashback and other brutality is minimized except one brutal scene. There is even a suggested love story between Harriet and her master’s son Gideon Brodess (Joe Alwyn). It’s all in his mind.  Harriet doesn’t even entertain these ideas, but the setup is there.

Now known as Moses, Harriet is too busy rescuing her people and fighting a war, yet more importantly never forgetting where she has been and what she left behind. She tells those assembled in the North at a meeting where Frederick Douglass and other well-known abolitionists have gathered, that the Africans who were born free do not know what it is like to be enslaved and if they did, they would understand the urgency with which she operates.

What I like about this film is the compassion Harriet has for her sister, Rachel Ross, portrayed by Deborah Ayorinde, an actress who was born in London, yet grew up in San Jose. Harriet loves her family, her sister, mother and father and puts her life at risk caring so much for them.